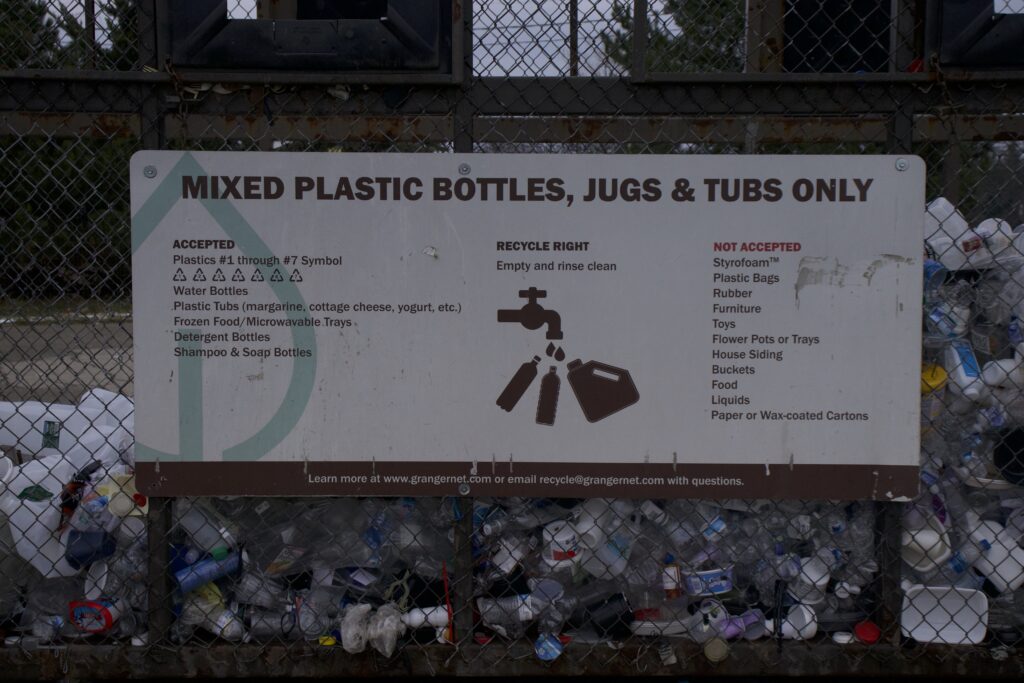 Climate change is becoming more and more prevalent each day. The earth is getting warmer, summer temperatures lasting longer, wildfires burning more frequently, air becoming more contaminated, and many are being told it’s too late to stop it. Though there is no all-encompassing solution in sight, one of the many taught solutions to slow the global warming process down is to recycle.

Reduce, reuse, recycle. It’s one of those lessons taught in grade school science classes that sticks with people. However, even though most people know what recycling is and how to do it, there are still landfills full of recyclable plastic and animals dying of plastic consumption. Tons of plastic, some recyclable and some not, are created every year. Why are both kinds ending up in landfills, or in nature?

According to Gina M. Florio, a journalist at Bustle, only half the U.S. population recycles daily while 13% of Americans don’t recycle at all. However, over the years, there has been an increase in recycling. According to the United States Environmental Protection Agency, recycling and composting went from 5.6 million tons in 1960 to 93.9 million tons composted and recycled in 2018. In 2018 alone, more than 69 million tons were recycled and 34.6 million tons were combusted with energy recovery. But year after year, more waste (regardless of its destination) is being produced. Even with increased recycling, 2018 saw 146.1 million tons of waste end up in landfills.

This could be due to the inconvenience and confusion around recycling. “The Achilles heel of recycling still revolves primarily around confusion, time-consumption and accessibility,” Busch systems states on their website, referring to a study conducted by IPSOS, a leading research organization. Busch Systems is an organization whose mission is to support everyone who cares about waste diversion with leading edge products and services that maximize the quantity and quality of their recycling program.

“In the same study, respondents to the survey stated that when unsure about whether a specific material can be recycled, 50% said they would give up and throw the item in the trash and 18% would put it in the recycling bin anyway,” Busch systems states on their website. They also mention that 75% of the survey’s respondents said they did not know that pizza boxes and juice boxes are not recyclable.

Recycling can also be costly. “It costs $300 more to process one ton of recycling in New York City than it would cost to take those same materials to a landfill,” Florio said, citing an opinion piece by John Tierney, an environmental scientist, written for the New York Times titled “The Reign of Recycling.”

“To cancel out the greenhouse effects of a New York to London flight, you would have to recycle 40,000 plastic bottles,” she said. “And that’s just if you fly coach. You’d need 100,000 bottles to make up for a business class seat.”

Research was conducted at Bucknell University to determine the optimal recycling rate. They determined that 10% recycling of generated waste is optimal.

“Recycling up to 10% appears to reduce social costs, but any recycling over 10% costs the environment and the economy more than it helps,” the study’s co-author, Thomas Kittaman, said. “The environment and economy suffer as we transport some recycled materials to destinations as far afield as China.”

However, not all recyclables measure up the same. “According to Tierney, 90 percent of recycling’s greenhouse benefits come from the following: aluminum, paper, and cardboard,” Florio said. Materials such as plastic, glass, and rubber should follow the other two “R’s” first: avoid purchasing them when possible, and when they must be bought, reuse them.

The plastic that doesn’t earn the title of reused or recycled is adding up, and its negative effects are affecting the planet in many ways.

According to healthguidance.org, plastic bags are often littered and shredded small enough to wind up in waterways. Through the waterways they travel to the sea and kill wildlife that mistake the plastic for food. “As one species begins to die off at an abnormal rate, every other living organism in the waterway is impacted,” home and environment journalist Jamey Wagner said. “There are either too many or too few and changes within the environment continue to kill off yet more organisms.”

The plastic that stays on land is also hazardous. Plastic bags release harmful chemicals into the environment as they break down and inhibit soil nutrients.

“The indefinite period of time that it takes for the average plastic bag to break down can be literally hundreds of years,” says Wagner. “Every bag that ends up in the woodlands of the country threatens the natural progression of wildlife.If you consider the number of littered plastic bags ranges from 1.5 million to 3 million depending on location, this equals a lot of ecosystem sustaining lives lost.”

So the ultimate solution to lessen plastic production is to find alternative, reusable options. One of the easiest ways to do it is by shopping with reusable bags. Plastic bags are not reusable in the long-term since they’re weak and easy to tear.

“Paper bags are a possible option, but they also take their toll on the environment,” Wagner said. “The use of trees to increase the production of paper products combined with the increased energy that is required to make paper bags will also have a negative environmental effect.”

Cloth shopping bags or baskets are ideal. Instead of buying bottled water, opt for a stainless steel bottle for a drink. Plastic and glass are not as effective to recycle as it is for someone to not use them at all. They are inexpensive to produce but harmful for the environment. Their negative impact isn’t resolved by recycling them.

The popular assumptions about recycling are wrong. Recycling alone will not solve everything. However, the three R’s of reduce, reuse, recycle, hold true—in that order. While consumers can’t fix the problem on their own, greater intentionality with their purchases could minimize the inevitable changes the future holds.

Kristian Wayne is a senior studying creative advertising and journalism. He spends his time writing, taking photographs, and working as the head of advertising at MSU Telecaster’s Giraffehouse. He currently interns at WKAR for the social media department. He is a song-writer, copywriter, actor and creator who hopes to practice freelance photography, copywriting, and creative media. Instagram: @waynethevision