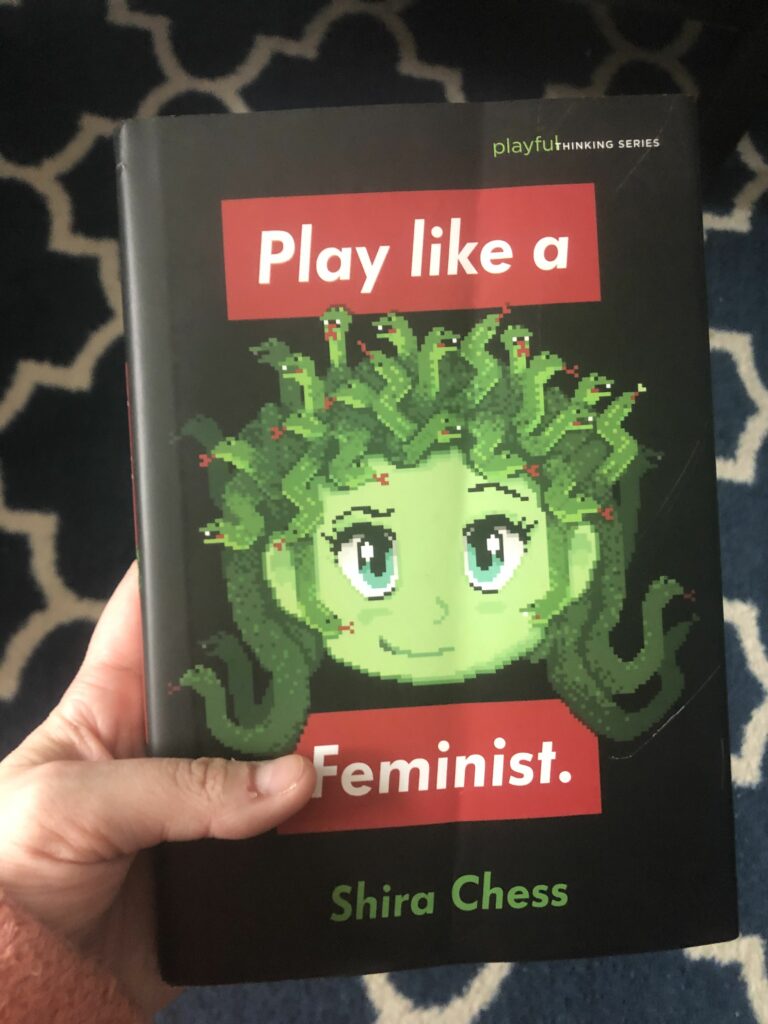 “Is that a girl in prox chat?” a player asks over the noise of the virtual battlefield. I answer their question, and they turn around and shoot my avatar, even though we’re playing on the same team. I hit the redeploy key to join a different fight and reply, “no u” to the hate message in my inbox. Later, I cheerfully team-kill that player and send them an invite to my outfit when I see them at the next fight.

It used to bother me that there were gatekeepers in my online game of choice, Planetside 2, but I refuse to let their sweat interrupt my leisure time. That player doesn’t know that I’m a high-ranking officer in a popular outfit, where I play a key role in the community. They only wanted to exert dominance over a girl (though I identify as nonbinary) who is clawing for XP in a male-dominated game. But leaving the fight with the upper hand is my form of playful feminism, similar to what Shira Chess’s “Play like a Feminist” prescribes as the antidote to the toxicity of the gaming world.

Feminism and gaming don’t sound like they would go together; the stereotypical assumptions about the two bring to mind burning bras and gory shooter games, which have little to do with one another. But in spite of those reductive stereotypes, the two concepts are closely entwined.

In “Play Like A Feminist,” Chess takes a discursive route to proving that feminism needs gaming and gaming needs feminism. At the root of the argument is that there is an abundant need for more play in today’s society. Play is an act that is typically employed by children, and childhood is characterized by the need to play and develop.

But play presents itself (if it presents at all) differently in adults because playing becomes a complicated matter when we reach adulthood. Athletics increasingly become centered around health, hobbies are encouraged to be profitable or productive, and time becomes a rarer resource. Enter feminism, which Chess states can be employed to argue that everyone–children and adults alike–deserves to play more. Video games are an ideal staging ground for play because they are so expansive.

The first section in “Playing Like A Girl” presents the idea that ‘playing like a feminist’ is a radical update of the old phrase ‘playing like a girl’ that doesn’t “necessitate a kind of gender essentialism” and leaves room for positive intersectionality to join the game. Chess uses author bell hooks’s definition that feminism is “a movement to end sexism, sexist exploitation, and oppression.” Chess takes the position that playing like a feminist is not limited to women: it’s for anyone who believes in the inclusive idea of play. “A playful feminism is one that plays into a structural paradigm yet pushes at the boundaries of that structure,” Chess wrote.

The second section, “PWNing Leisure,” argues that play is not frivolous and interrogates the complicated relationship between leisure and productivity. Chess urges feminists to fight for leisure because “bodies at play live better and more fulfilled lives,” and enabling those bodies to play should be a chief concern of modern feminism.

Chess proposes applying the term “PWN” because it’s shorthand for domination in gamer culture, and feminists need to dominate leisure time to wrest it from societal expectations. Chess lays down five steps to PWNing leisure for feminists, which culminate in an invitation for feminists to enact change on the game as a whole, to “find ways to fix the games that already exist and make them better.” PWNing leisure is a concept that is not limited to video gaming because taking space to enjoy any act of leisure free from expectations of productivity is dominating leisure in a positive way.

“Play to Protest” and “Gaming Feminism,” the third and fourth sections, discuss how protest can (and should) be playful, pulling examples from history. Protesters dressed as mimes, wearing Guy Fawkes masks and playful protest art are some examples. Feminist protest can incorporate playfulness, like wearing pink pussy hats at the Capitol (rather than traditional methods like collecting signatures) to make memorable statements.

But that playfulness is harder to incorporate in the digital sphere. Feminists have been protesting toxic gaming culture for decades, with increasing amounts of pushback in recent years. But their methods aren’t usually playful in nature. Chess argues that protest by critique from a distance is no longer enough—it’s time for feminists to protest by playing and calling in others to play with them so that together they can change the rules in their favor.

Calling in is essential to playful feminism because it opens access to gaming, making space for more players and creators from underrepresented demographics to push back at modern gaming stereotypes. Independent developers are creating better quality games, many of which are aimed at non-traditional gamers.

The link to getting more non-traditional gamers to play is feminism. There are already feminists in gaming; Chess says they are “deeply enmeshed in the complexities of gaming culture, and indeed know why games and play matter.” These feminists already ensconced in gaming culture need to bring in more non-traditional gamers, which will continue to turn the wheels of change.

Chess wraps up the book by laying out a template for creating gaming circles with the aim of getting non-traditional gamers playing. She created a group, not unlike a book club, where non-traditional gamers explored new games and played together without judgment. By fostering an environment free from the unwritten rules of gaming laid down by the internet, her circle was able to access games that they never would have found on their own, and built social relationships through gaming.

Many non-traditional gamers already exist in the gaming world, they just don’t necessarily define themselves as such. The author’s family friend said that three generations in their household play Clash of Clans together because it’s something playful to bond over. They are a family of non-traditional gamers, but don’t define themselves that way because they feel like outsiders to the gaming community.

And that’s what Chess’ gaming circle template aims to change by giving other non-traditional gamers the tools to create a gaming space in defiance to toxic gaming stereotypes. Stereotypes add to the social mess of online games and gaming, and generate more access barriers. Not all games are violent;  not all gamers are toxic. Non-traditional gamers and feminists exist in gaming groups, and it’s up to them to circumvent gatekeepers by inviting others in.

By methodically eliminating arguments against gaming, Chess invites positive relationships with play, gaming and gamers. One member of her group said that she connected with her teenage son over games because the gaming group taught her to let go of the need to be “good” at every game she picked up. By allowing her son to help her, they were able to play together and bond in a new way.

Being “good” at a game in order to win is only one of the obstacles to gaming that Chess discusses throughout the book. Other obstacles include identity, money, platform access, cultural access to leisure and the social elements of gaming. Chess is frank about her privilege and encourages further discussion on feminist approaches to leisure and gaming from other perspectives.

Chess’ conclusion is that everyone deserves to play more. People deserve to be brave and try new games they might not like, to use walkthroughs and ask for help to achieve our goals and to play games that we enjoy without being judged.

Above all, women deserve permission to spend leisure time playing without the expectation of productivity. Playing like a feminist means playing games in a way that pushes the borders of the expected, to take up space playing and not be intimidated by the game or other players. Chess hands the reader all the right tools: permission to play, permission to approach the game however they want and an outline for creating a gaming circle for themselves. All that’s left is to take that first step and commit to playing.

Recently I was asked why I’m an officer in a gaming group if I’m not “good” at the game, and the answer is that being “good” is subjective. I don’t have to have a high kill-to-death ratio to have fun, and enjoying a game and its community is worth more than a high kill count. I’m a non-traditional gamer, and I joined a gaming group to do exactly what Chess prescribes: take up space, invite others and play.

Play Like A Feminist is available from MIT Press

C. Rose Widmann (they/them) is a first-year M.A. student in arts & cultural management at Michigan State University and a graduate assistant at The Cube. When not writing grant proposals or playing Planetside 2, C is competing for both the MSU club fencing and club gymnastics teams. Insta: @C.rosewidmann