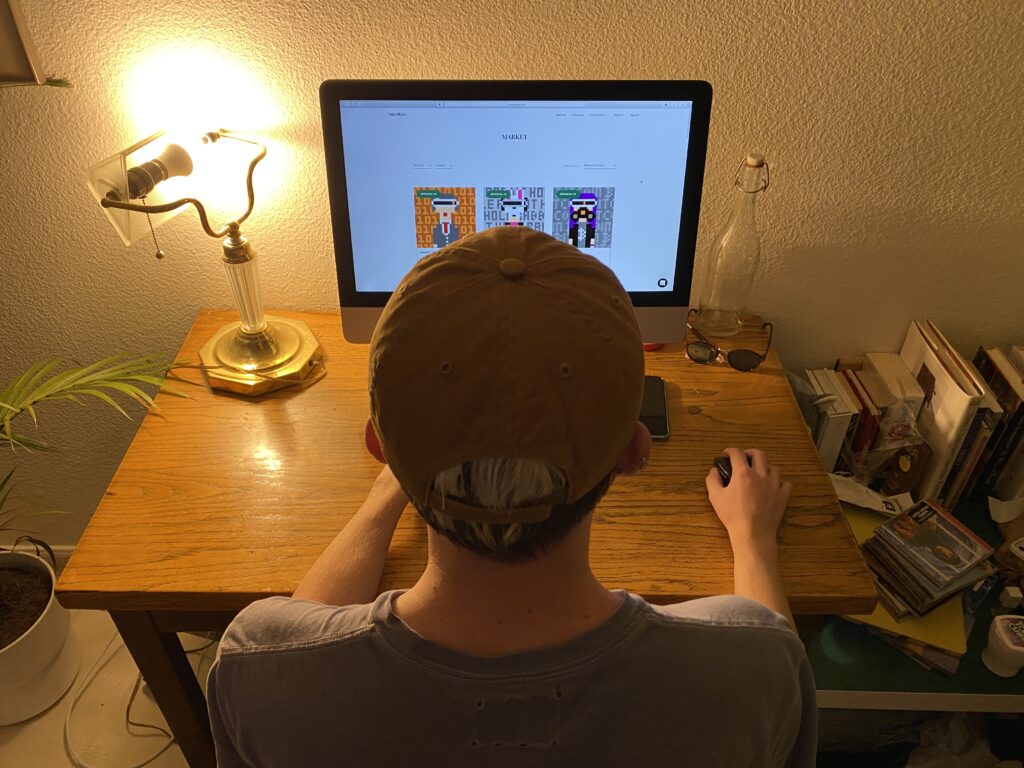 For anyone who has been online for the past couple months, there’s a pretty good chance they’ve heard about non-fungible tokens. NFTs came onto the market in 2014, following the creation of Bitcoin, the first ever cryptocurrency, in 2009. Recently, they’ve gained notoriety and picked up speed in online communities. In an age full of social media dictating what feels like every aspect of one’s life, purely digital currencies and works of art took off quickly.

At first, NFTs felt like something new and different that no one quite had a handle on. They were refreshing and a nice change of pace from what people had all been accustomed to hearing about, which seemed to just be different iterations of Bitcoin and how celebrities were using social media to their advantage. But as people learn more about NFTs—what they are, how they function, what they do—they start to realize that maybe they’re more than just a hot topic on Twitter.

NFT stands for non-fungible token. Non-fungible means unique and unexchangeable, unlike most other things in life, such as money. If someone needs change, they can take a twenty-dollar bill and exchange it for a ten, a five and five one-dollar bills without their money losing any of its worth. NFTs, however, have unique values and aren’t exchangeable.

While NFT as a term generally refers exclusively to digital assets, there are other non-digital assets that are non-fungible as well. Take the “Mona Lisa,” for example, or a house. Both can be replicated or preserved in some other format, such as an image or print, but there is one and only original piece whose essence and integrity cannot be imitated. Most revered art is non-fungible, and so are most major purchases like cars.

Digital NFTs can be purchased from anywhere between a couple of cents to exorbitant amounts of money. As of this writing, the most expensive NFT to be sold is a collage of 5,000 images called “Everydays – The First 5,000 Days” by artist Beeple; the purchaser had a winning bid of over $69 million. Other examples of high-selling NFTs include “Stay Free” by Edward Snowden, which sold for $5.3 million, and Paris Hilton’s collaboration with Blake Kathryn, “Iconic Crpyto Queen,” which sold for $1.1 million.

Once ownership of an NFT is transferred to a person, often for thousands, or even millions, of dollars, the recipient owns the digital asset. Similarly to art, NFTs can be copied, but the copies don’t hold the same value. Even if the item—for example, a JPEG—is stored and shared by other people, a mere copy is shared instead of the true NFT. The original data of the NFT is encrypted and protected to ensure that whoever has just purchased the asset is the one and only owner.

This may sound pretty similar to copyright, but purchasing an NFT does not give the owner the exclusive rights to the production or distribution of an item. NFT ownership is distinct from copyright. In fact, buying an NFT is essentially purchasing some lines of code embedded in the asset which identifies the owner. At their heart, NFTs are supposed to be a way for artists to be able to claim and protect their work. One way artists can secure their work is through royalties, which guarantee that the artist receives a portion of the profit every time their art is re-sold.

The data of NFTs is stored in what is called a blockchain, which is a digital ledger that defines a digital asset as unique and not interchangeable. This ledger includes an extensive list of ownership history. The original file is exclusive to whomever has purchased and owns the rights to a particular NFT, but copies of the file are neither illegal nor hard to obtain. Anyone who purchases and acquires ownership of an NFT is recorded into the blockchain, so there is a digital trail tracing back to the creation of the file.

The original GIF of Nyan Cat, the cute, pixelated cat with a rainbow train behind it, was turned into an NFT by Chris Torres, its creator, to celebrate its tenth anniversary. However, copies of this gif that existed both pre- and post-NFT-ization of the GIF will continue to circulate the internet for years to come. Anyone can look up or create a copy of the file, but the original NFT retains its uniqueness and worth due to the blockchain encryption. Copies are just that—copies. They lack those lines of code identifying the owner.

Though they are an interesting new way to build wealth, NFTs have startling implications on both the environment and the economy. Similar to how cryptocurrencies like Bitcoin took the internet by storm a few years ago, NFTs are doing the same thing now. NFTs have been heavily criticized for their massive carbon footprint, criticism that is warranted. NFTs are sold in auctions, all funded through cryptocurrency. These transactions take place using Ethereum: technology which supports cryptocurrency transactions and keeps user information, transactional records, and buyers and sellers’ cryptocurrency wallets secure.

To be clear, it is not the production of the NFTs nor the NFTs themselves that have such a large carbon footprint. Instead, it is the process of producing the cryptocurrencies used to purchase NFTs that is so harmful to the environment.

Ethereum, along with most other cryptocurrencies, are founded on the “proof of work” system. This system requires that users compete to solve puzzles through trial and error in order to coin another block and add it to the chain. This process is called mining and is the culprit that makes NFTs expend energy on such a large scale. Mining for cryptocurrencies like Ethereum and Bitcoin requires extremely high-powered computers, most of which use fossil fuels and result in mass amounts of carbon dioxide production.

Joanie Lemercier is an French artist and activist who had spent a considerable amount of time reducing his studio’s carbon footprint. Since 2019, Lemercier has set the goal to reduce his carbon footprint by 10% each year. His first drop of NFTs used more energy in about ten seconds than his entire studio did in two years. Following this drop, Lemercier has cancelled his next NFT drops and has become a champion for reducing the carbon dioxide emissions produced in NFT sales.

The official Ethereum website claims that they are in the process of switching from the proof-of-work method to the proof-of-stake method, which doesn’t require as much energy, in order to reduce emissions. The key difference between PoS and PoW is that PoW requires miners to compete, while PoS miners are selected at random. However, as of this writing, Ethereum still relies on the PoW system and continues to have a negative effect on the environment.

Some artists have announced NFTs, only to turn around and cancel the release due to fan backlash. The Gorillaz, a virtual band, announced that for their twentieth anniversary they planned to create some NFTs that would be auctioned off to fans. They were met with immediate criticism.

In 2010, the Gorillaz released their third studio album, “Plastic Beach.” Among other things, this album was commentary on human impact on the environment and not-so-subtly broadcasted the message, “humans are destroying the planet.” The title itself is a nod to this, and the album cover features a pink island made up entirely of waste, where the fictional bassist of the band was supposed to have recorded the entire album.

Music videos from the album relay this message as well. The “On Melancholy Hill” video uses a polluted ocean as the backdrop and features a dead manatee, presumed to have been killed by the human waste filling the ocean. The point was hard to miss, so naturally, fans were taken aback by the seeming flip the band had taken by supporting the creation and sale of NFTs.

The driving point of the NFT market is profit. Arguably, the only reason one would buy a digital asset for such a high price is to be able to resell it down the line for a higher cost. Purchasing an NFT is an investment, just like purchasing a house. For artists, creating NFTs is just as much of an investment, not to mention a way to make an insane amount of money. But is it enough money to make artists completely contradict their morals?

After the public outcry following the announcement of the Gorillaz NFTs, the project seems to have been cancelled. In response to a comment that said, “So no nft?,” Gorillaz comic artist Jamie Hewlett replied “no!” Supposedly, management was the mastermind behind the project, not the artists themselves. But without an official statement from either regarding the situation, nothing can be confirmed.

NFTs may have been created with good intentions, and they may seem cool, but the process through which they are currently created and sold is detrimental to the health of the planet.