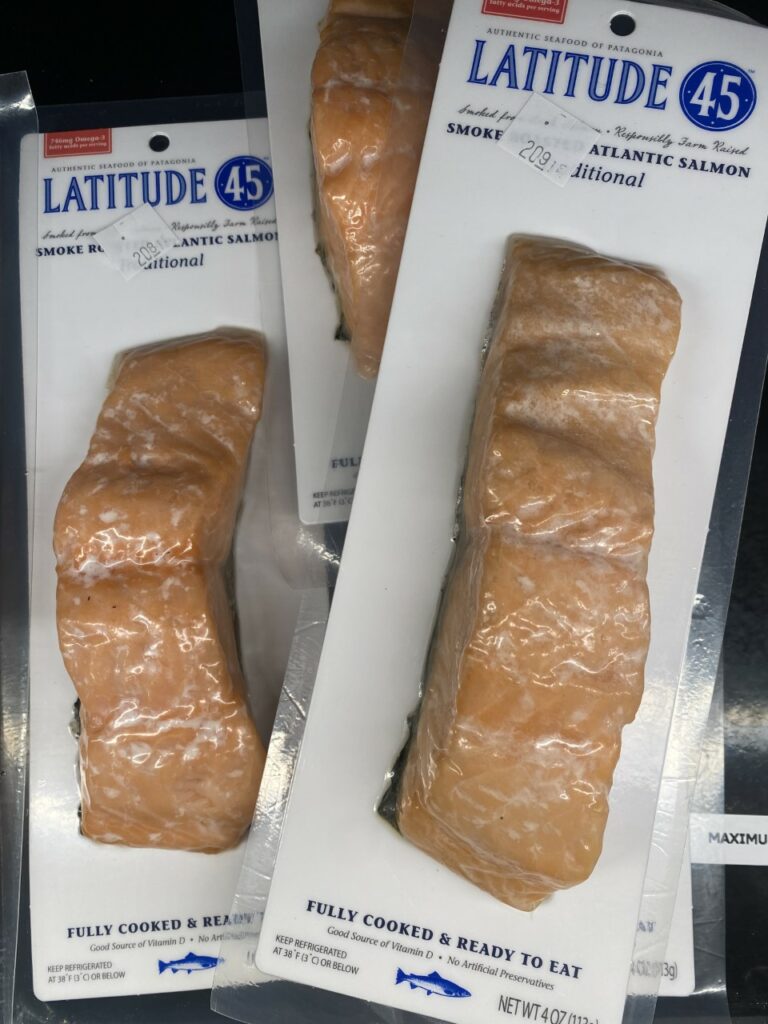 There are two kinds of people in the world: those who hate salmon and those who love it. People either get grossed out by the look, smell, and/or taste of it, or they enjoy it grilled, baked or maybe even raw in their sushi.

Salmon is largely eaten in the United States by individuals who enjoy seafood or are trying to lose weight. Although some might gag at just the thought of it, the fish is commonly used in a variety of foods and caught by fishermen so they can eat it later. Lately, there has been a lot of controversy on farmed salmon versus wild salmon. Many wonder which salmon is good for them and which one is bad.

Farmed salmon is salmon that has been raised with one goal—to be put on dinner plates. These fish are raised using intensive farming techniques while wild salmon are caught using commercial fishing techniques. Both farmed and wild salmon are sold in grocery stores, but there are a few ways to decipher which is which.

According to an article from Sentient Media, wild salmon contain less fat and chemicals, but both contain polychlorinated biphenyls. PCBs are a group of man-made chemicals consisting of carbon, hydrogen and chlorine atoms. They were first manufactured in 1929 for use in oil-based paint, floor finish and plastics but were banned 50 years later. According to the Mayo Clinic, PCBs are found in salmon that live in contaminated water. The amount of PCBs in each individual salmon varies per region. Although it may be intimidating to see these products in grocery stores with such harsh chemicals, the PCBs in farm salmon have been on a decline since 2003.

Farmed salmon can also cause harm to one’s nervous system and increases the risk of cancer due to the astaxanthin. Synthetic astaxanthin, the red-colored dye that gives salmon its pale-pink color, comes from the food that the fish eat. This has no health benefits to humans and can also be harmful to their health. Canthaxanthin is sometimes used in replace of astaxanthin to reduce costs and increase profits. This chemical has been documented to cause vision loss and hyperactivity in young children.

Farmed salmon may cause several health defects because of the chemicals they contain, not to mention the environment they are raised in. Farmed salmon are often kept together in small, over-crowded pens, leading to dirty water that makes a hotspot for disease. While wild salmon are able to swim without cramped environments and artificial food, they still receive harmful metals and chemicals from the polluted ocean.

Although this may scare some people to eat salmon, the health benefits outweigh the contamination exposure. While salmon can have severe effects on the human body, it is rare for those situations to happen.

Both wild and farmed salmon have a variety of impressive health benefits. Different kinds of wild salmon contain a high content of omega-3 fat, vitamin B12 and B3, selenium, and of course, lots of protein. Farmed salmon has high levels of omega-3s and vitamin C, but tends to also have high levels of saturated fat—the kind of fat people should eliminate from their diet—and calories. The reason farmed salmon tends to have less vitamins is a result of the food they are being fed.

Omega-3s vary in the type of salmon and their diet. According to the Washington State Department of Health, “farmed salmon filets contain as many grams of omega-3 fatty acids as wild salmon because farmed salmon are fattier than wild salmon.” New feeds for salmon are starting to contain more protein and less fishmeal. The more plant-based ingredients salmon contains, the lower the level of long-chain omega-3 fatty acids. “However, fish are fed feeds containing enough fish oil to maintain omega-3 fatty acid levels equivalent or higher than most wild fish,” according to the WSDH.

Both kinds of salmon are essentially good for humans and their health, but wild salmon is generally the healthier option of the two. To ensure that the salmon is in its healthiest form, it is better to eat it dried, cured or smoked. These types of preparations can result in higher concentrations of vitamins and minerals than those of the fresh fish. When shoppers are buying salmon, it’s best to look for salmon that originates out of Alaska, which has strict guidelines on their salmon and its sustainability.

As far as fresh and frozen salmon options, both are great choices. There is little to no difference between the two when it comes to the nutritional value, but it is more of a personal preference on how each person enjoys preserving and eating their seafood.

For sushi fans, it is important to be aware that sushi-grade salmon has no regulations in the United States. Salmon needs to be frozen prior to consumption in order to kill bacteria and parasites, but when it is labeled “Sushi Grade Fish,” that only means the seller deemed it safe, not the Food and Drug Administration. Sushi-eaters should want to ensure they’re getting fresh, high-quality salmon that’s free of parasites. In order to do this, they can look and smell the sushi when in the store. Besides looking fresh, it should not smell fishy.

Sushi fans should avoid  “all you can eat sushi” restaurants because it usually means the sushi is not good quality. They should avoid eating salmon fried or deep-fried as it increases fat content and takes out some of the important nutrients. According to the “Journal of Steroid Biochemistry and Molecular Biology,” fried salmon lost around 50 percent of its vitamin D content—whereas baked salmon lost none.

The controversy over which salmon is healthiest has been a hot topic on social media and even in the news.  Both wild and farmed salmon are safe to eat, but farmed salmon contains more harmful chemicals and less nutritional value than wild salmon, making wild salmon the top choice between the two.

Molly Maczik is a fourth year undergraduate majoring in professional and public writing. She currently works as an online fitness coach and hopes to continue her fitness business post-college while integrating the writing and editing techniques she has learned in the past 4 years. When she’s not at the gym, she likes to spend time with friends and family and be outside. You can follow her fitness account on Instagram @mgfiiit for all things fitness, nutrition, mindset and lifestyle.