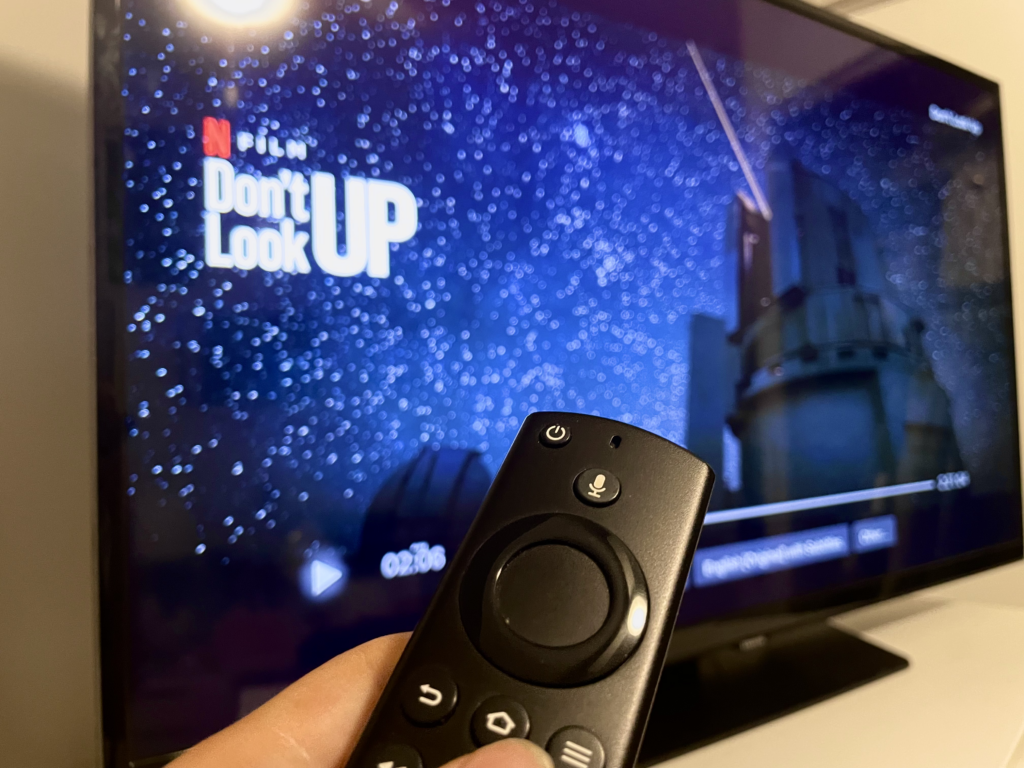 Disclaimer: This article contains spoilers for “Don’t Look Up.”

If people were told the planet would be destroyed in just a few months, would society be able to focus on what is truly important to create change and save humanity?

On Dec. 5, 2021, Netflix dropped the exclusive film “Don’t Look Up.” Big names like Leonardo DiCaprio, Jennifer Lawrence, Jonah Hill and Meryl Streep come together to tell the story of Michigan State University astronomers who discover a comet ready to destroy Earth. But when they bring their research to the government, they aren’t taken seriously.

The astronomers attempt to spread the word but are unsuccessful—even becoming memes in the process. The film portrays a deep dive into a media-obsessed society who must face a genuine and life threatening issue, mirroring the real society and its global issues today.

Netflix released statistics that showed the film quickly rose to become the third most watched film on the platform in its first month of release, and it is quickly encroaching on the top two. The movie has also broken records, with Allison Prang of the Wall Street Journal reporting that the film hit 152 million hours watched in just one week.

The film appeals well to younger audiences with its use of memes, social media jargon, dark humor and shallow performances from a high-maintenance pop star played by Ariana Grande. Targeting this audience is an important step to actually making a change and taking on the world’s issues since those are the ones who will have to live with these future problems.

In an interview with Netflix, the film’s writer and director, Adam Mckay, reflected on the creation of the film, pondering the thought, “Can you do something about the climate crisis and still laugh a bunch?” Clearly, Mckay was successful in his visions. With seasoned actors and masters of improvisation, the film hits its comedic markers. It created many “laugh out loud” moments while still achieving the depth and seriousness of the looming threat to humanity.

The movie in its entirety is a reference for climate change although many other current events and issues can be related to the film. McKay stated in a video with Entertainment Weekly that he wrote the movie in response to the ever-growing issue of climate change. As time went on, it happened to fall into perfect symmetry with the COVID-19 pandemic.

The denial of science makes up a large portion of the situations which occur in the film. People often turn to social media and unreliable sources to believe whatever truth best suits them. The use of new age technology is shown numbing users to serious and devastating matters and taking no action against these issues.

The film also mirrors their characters to many real-life politicians, celebrities and billionaires. It is easy to recognize the mannerisms of these figures, and viewers have seen the real people making decisions that only benefit their personal gain. In a glimpse of hope in the film, the president, played by Meryl Streep, sends one man on a rocket mission to deter the comet. However, a recognizable technology genius, Peter Isherwell, makes a play for personal gain after learning the comet is filled with trillions of dollars worth of materials. Suddenly the rocket returns, and humanity loses its chance at safety.

After losing this opportunity, there are many powerful scenes portraying the political divide between those believing in science and the threat of the comet and those who don’t. The campaigns, labeled as “Just Look Up” and “Don’t Look Up”, allude to the political divide in the United States and portray the ignorance many have in the face of serious existential risks.

No, it may not be a planet-destroying comet hurtling towards Earth, but it could just as easily be the shocks of climate change leading to massive floods, wars for water, nuclear power tensions or even a global pandemic… sound familiar?

A resource created as part of the film’s call to action is a partnership with the Count Us In organization, creating an online platform to build a community ready to take action against climate change. The site works hand in hand with the film’s messages and displays statistics on the homepage, stating about 250,000 people have joined the community and 115 million kilograms of CO2E Carbon have been saved.

On Dec. 27, 2021, DiCaprio posted a video on Instagram for his 52 million followers, in which he comments on “Don’t Look Up” and its deeper meanings. He powerfully says that the movie, “… brings a mirror to our entire culture and how we deal with bad news, and whether us as a species can evolve to truly focus on what is ultimately the most important issue that’s ever faced humanity in the history of civilization.”