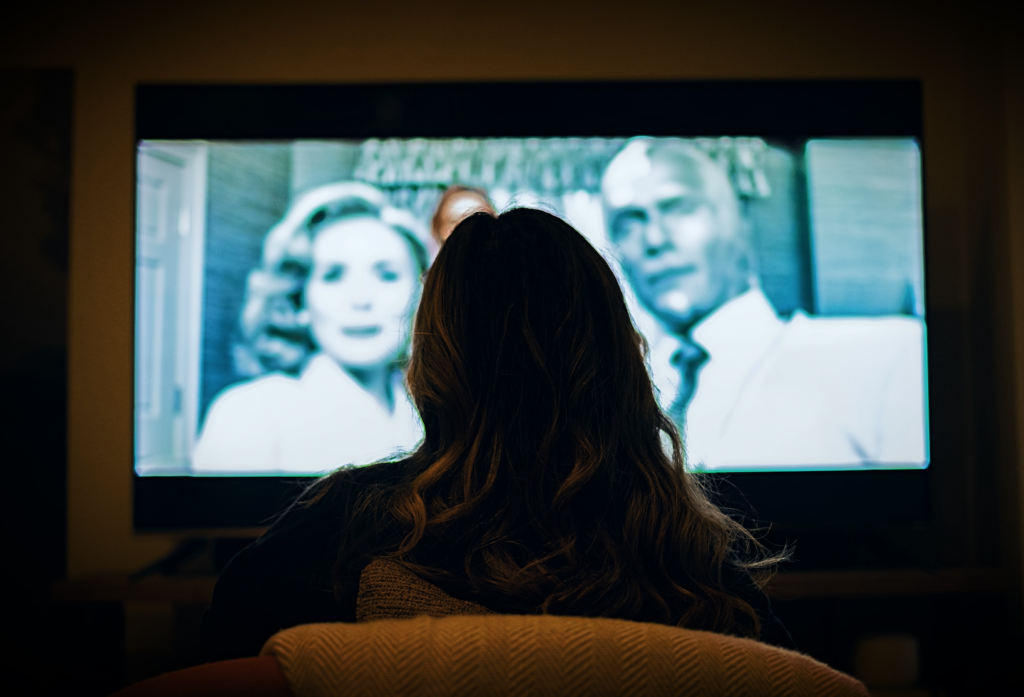 Following the success of their recent films, Marvel Comics has moved to the television scene with the release of five new shows coming to Disney+ in 2021. The first show released on the platform was “WandaVision,” which focused on the relationship between Marvel superheroes Wanda Maximoff, more commonly known as The Scarlet Witch, and Vision.

“WandaVision” follows the events shown in “Avengers: Endgame,” where unfortunately, Vision had died. Yet, in episode one, viewers meet both Wanda and Vision as they move into a home in Westview, New Jersey and follow their lives as they go to work in normal corporate jobs, engage in neighborhood events and even raise children. The series pays homage to existing TV shows, with the style of each episode changing to fit the themes of sitcoms such as “The Dick Van Dyke Show” or “Modern Family.” Though as the series goes on, the audience is soon made aware of the darkness behind these comedic themes.

It is discovered that in her grief, Wanda had used her powers to create a fantasy life based on the idealistic worlds of the TV shows she watched as a kid. She had manipulated this small town, and all the people in it, into the creation of the world of her dreams so she could experience a life she never had. One where her partner was still alive and she could have kids and live a stereotypically normal life like the ones she saw on TV.

In many ways, Wanda emulates the emotions of so many people within the real world. People who long for a simpler life, free of the struggles they face daily. And when they turn on the TV, they are often greeted with hundreds of ideal worlds where the struggles of the characters within it rarely face the same of those on the outside.

“Ostensibly a woman alone in the world with no family and an uncertain future, Wanda’s story is a parable that demonstrates the tragic consequences of living vicariously through an existence defined by escapist entertainment,” said Andrew Firestone for ScreenRant.com. “And it is becoming more common in the modern age of binge-watching television.”

Wanda is a perfect example of someone who used television as a form of escapism. She found comfort in TV and allowed herself to be transported into it. And for many people, watching TV continues to serve as an escape from reality as it allows them to take their mind off the pressures or responsibilities they may be facing in their real life.

“While I’ve never gone through a loss and heartbreak as strong as Wanda had, I can look back at times I’ve felt extremely stressed or upset in my life and I wished I could have escaped into my favorite TV show,” Michigan State University alum Mariana El-Tawil said. “When your reality sucks and your shows are a form of escape, they look like a way better option.”

In an excerpt from the book “The Public Opinion Quarterly Vol. 23” called “Social and Personal Stress and Escape Television Viewing,” author Leonard I. Pearlin studied how people used television as a form of escapism. He said, “Television offers relief from the anxious vigilance of a person who feels vulnerable to other persons or needs other persons as protection from the uncertainties of the world. And when the world is viewed with hopelessness, escape becomes a much more likely response than an attempt to deal with it directly.”

When looking at the stress of one’s own reality—whether that be financial troubles, struggles with social identity, etc.—they may turn to the TV to find relief.

“I definitely use TV as a form of escape,” El-Tawil said. “It just allows whatever is on your mind to kind of melt into the background while you focus on the plot or lack of plot on the TV. We all know that it’s not making the tasks or worries that we want to ignore disappear, but it allows them to go away for at least a bit.”

As television and binge-watching grow as common forms of escapism, many within the industry have chosen to utilize this when writing and creating shows. Several shows have attempted to relieve the pressure their viewers may experience on a daily basis by creating environments free from them.

Creator, writer and star of” Schitt’s Creek,” Daniel Levy, said he chose to write a world where homophobia, racism, sexism, etc. don’t exist in hopes of providing a safe place to those who watch his show.

“We learn by what we watch,” Levy said. “And even if you’re presenting someone who puts out that energy, there is someone who will watch that and side with it. If you take the hate out, if you take the rules that are dictating who you can love, how you can love them, what kind of people are good people, what kind of people are bad people, you’re only left with joy, which can only have an enlightening effect on whoever’s watching it.”

“Schitt’s Creek” offered a safe space to those who may be struggling with their identity or individuality, and it offered a needed example of what the world could look like without judgment or discrimination. Shows like this can be beneficial for many as it can change the way people look at these social issues.

In a letter signed by 1,800 moms of LGBTQ kids, the moms thanked “Schitt’s Creek” for its writing.

“Thank you for the LGBTQ characters, relationships and storylines,” they said. “Your willingness to explore, inform and educate about LGBTQ people and their relationships in an entertaining but respectful and positive manner sets a tone that is often missing.”

“Schitt’s Creek” portrayed what many felt was the dream of what society could and should be. But as many unfortunately know, the world doesn’t often look like that.

“The world is a cruel place. There is no denying that, but pretending that it’s not is not going to help anyone,” Michigan State University senior Patience Schilling said. “People should not have to go through horrible things to learn about them. My life story is a little different from others, and I see these perfect versions of life through people and TV, and I do get sad. It gives off a sense that you aren’t worthy of a perfect life.”

So, what happens when the worlds you escape into don’t look like your own? When the TV turns off and you come back to your reality, how can this make you feel?

“When the audience of a TV program uses it as an escape from their own personal bereavements, and begin to identify more with the characters of said fiction than with the very real pitfalls of modern life, it overtime can create a bubble effect in which they begin to view the real people in their lives as little more than tools, means to an end, for their own sense of identity,” said Firestone.

A study in Frontiers of Psychology from December 2020 found that modern escapism through media, specifically television, during the COVID-19 pandemic led to negative effects on mental health, such as higher stress levels. The study specifically talked about the mental health effects it has on students.

After surveying students at two universities during quarantine, researchers Allison Eden, Benjamin Johnson, Leonard Reinecke and Sara Grady found that “stress and anxiety were related to various patterns of media use and in particular a variety of coping strategies using media.”

The study reads, “These results are in line with escapist theories of media use … suggesting that stressed students were attempting to emotionally escape their current stress levels via hedonically pleasant media choices. … We also found that escapist coping via media was associated with less positive affect, and avoidant coping with lower mental health scores.”

Though proven to have negative effects on mental health, escaping into television has grown increasingly popular, with production companies and tv networks capitalizing on the ability to binge-watch or rewatch past TV shows. It’s easier than ever to just turn on Netflix and play a show non-stop for five, 10, even 15 hours.

“In this age when television programs can be binged for hours on end with the click of a button, attachment to these fictional creations can manifest in a resentment towards the real world, which seldom plays out as cleanly or humorously as the worlds on television do,” said Firestone. “Expecting the real world to deliver this kind of experience does a disservice not only to the people around oneself, but also to the audience’s inborn ability to cope with these kinds of issues.”

Watching TV can provide a needed escape from reality and is healthy in theory. However, when the shows one watches conflict with their own realities, it can make the stress or anxiety they already face seem more severe.

“If you were to only immerse yourself in these picture perfect worlds where everything gets resolved by the end of the episode, then you’re only setting yourself up for failure or disappointment with the real world,” El-Tawil said. “It would most likely have a big hit to their mental health as they try to cope.”

When shows choose to ignore the realities of modern life, it can set unrealistic expectations for happiness.

“Many people go through troubling times, but TV doesn’t give the real process of those times,” Schilling said. “It always gives a ‘happy ending.’ which in most cases you have to find your own happy ending, it isn’t just handed to you. Viewing the ‘ideal worlds’ can bring on a misunderstanding of the real world. In not so many words, the world isn’t always a happy ending and many people have to fight the thoughts of ‘why cant my life be this perfect?’”

Watching TV can be a beneficial way to cope with the stress of daily life and can provide relief when one might need it most, but it is important to recognize that what they see on TV isn’t real. It is okay if their life looks different than that of the Brady Bunch or the Dunphys in “Modern Family.” Television should be something that makes the viewer happy and if it isn’t, it might be time to take a break and focus on who they are within reality.

Bianca Bucholtz is a senior studying professional and public writing with a minor in gender and women’s studies. She is currently working as the co-editing director at VIM Magazine. In her freetime, she enjoys spending time with her family and friends, watching movies/tv shows and baking