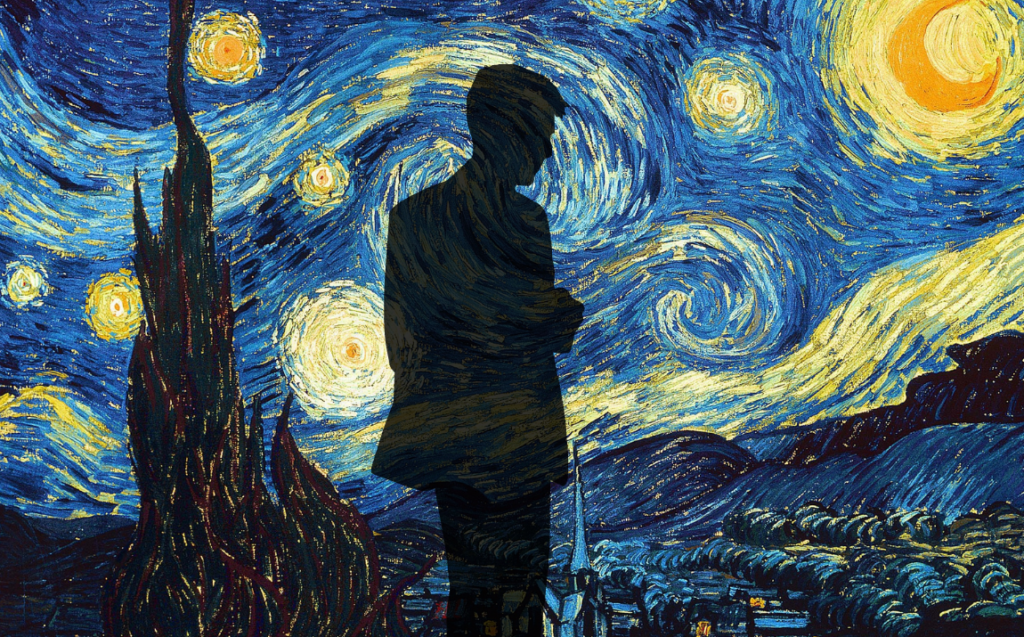 “Oh, if I could have worked without this accursed disease–what things I might have done,” Vincent van Gogh said in one of his last letters.

Many believe that van Gogh’s magnificent artistry can be attributed to his mental illness. However, the idea that suffering is what allows artists to create such beautiful work is a harmful myth that van Gogh’s story disproves.

Van Gogh seemed to struggle with mental health for most of his adult life. Those around him described him as withdrawn and gloomy. He began practicing severe self-discipline and abstinence for religious reasons, further isolating himself. His behavior was worrisome enough that his father recommended he go to the psychiatric asylum in Geel, but he refused.

He took his younger brother Theo’s advice and picked up art again, attending the Académie Royale des Beaux-Arts despite his dislike of formal art schools; yet, his return to drawing and painting did not ease his bouts of depression. He said in another letter to Theo, “I’m overcome by a feeling of great anxiety, dejection, a ‘je ne sais quoi’ of discouragement and even despair, too much to express.” During that time he used darker, earthy tones, not the beautiful, bright colors of his later works.

Van Gogh’s health, both physical and mental, continued to decline. He smoked and drank heavily, choosing to spend the little money he had on art supplies and models instead of food. Though he seemed briefly happier after moving to Arles in 1888, he was still in ill health.

His big claim to infamy was when he partially cut off his left ear. The details around the event are shrouded in mystery, but it is thought that after van Gogh had an argument with Paul Gauguin, another artist he lived with in Arles, he had a mental breakdown. He was overwhelmed by voices in his head and took a razor to his ear. He bandaged his wound and sent the ear to a woman in a brothel he and Gauguin often went to.

Van Gogh was taken to the hospital and had no memory of the incident. He suffered severe blood loss, hallucinations, anxiety and nightmares. Although he was discharged from the hospital, he would be readmitted there with similar symptoms a month later. He went in and out of the hospital until he agreed to admit himself to an asylum in Saint-Rémy in 1889.

When he felt well enough, he launched himself back into his work, making over 150 pieces during his one-year stay, many of which later became famous artworks. He was given an extra room that he used as a studio, and he often painted the institution’s garden on days he felt better. Although he was allowed to take short, supervised walks outside the facility, he was limited to painting nature and the interior of the Saint-Paul Asylum and its patients.

Painting seemed to calm van Gogh and give him a sense of purpose. Unfortunately, he suffered episodes of cognitive dysfunction and hallucinations that prevented him from painting. Another infamous incident was when he supposedly ate yellow paint.

The common myth is that van Gogh ate yellow paint to become brighter and cheerier.

Many see this as a beautiful, inspiring story of a man trying to overcome depression. The perpetuation of this romanticizes van Gogh’s mental illness as something wonderfully quirky, rather than the suicidal behavior it actually was.

It is true that during his episodes, he was caught trying to eat paint and drink turpentine, which is why he wasn’t allowed in the studio during his attacks. However, there is little evidence to suggest that van Gogh actually ate paint.

Even if he had eaten paint, it wouldn’t have been to intentionally bring about happiness. He was incredibly confused when he suffered attacks and could not remember what he said or did afterwards. As editor Sarayah Villasenor said in her opinion article on the subject, “Yellow paint is something that should be vilified rather than glorified. Suicide isn’t romantic and self-destruction isn’t pretty. Rather than painting over the ugliness, look at it and learn from it.”

It was at the Saint-Paul Asylum that van Gogh created what many believe to be his magnum opus, “The Starry Night.” He often painted the view from his studio window, but this was the only piece depicting it at nighttime. It was also one of his more imaginative pieces, as the village couldn’t have been seen from his window, and the moon wasn’t in the correct phase.

Despite its future notoriety, he regarded “The Starry Night” as a failure. It had been an experiment with the abstract, colorful style that was popular at the time that he wanted to try. Nonetheless, he felt deceitful as he painted it, wanting to paint less abstractly. He said in a letter to a fellow artist, “And yet, once again I allowed myself to be led astray into reaching for stars that are too big–another failure–and I have had my fill of that.”

Many interpret the painting as a sign van Gogh’s mental health was improving. Although he said little about “The Starry Night,” it is unlikely that it symbolizes this. One article by medical student Beatriz Freitas posits that the painting could actually symbolize the instability of his mental health.

The overarching narrative of his life is that painting cured him of his mental illness. This romanticization of the tortured artist stems from a lack of knowledge on mental health and an overly-positive pushback against stigma.

Though painting may have temporarily soothed van Gogh, his mental illness ended tragically.  Overwhelmed by the idea that he had failed as an artist and a man, the uncertainty of his future and the immense amount of pressure he put on himself, van Gogh committed suicide in 1890.

It was only after his death that his art was recognized and desired thanks to Theo’s wife, Jo van Gogh. She worked to raise public awareness for van Gogh around 1914. His story was mythologized over the years, turning a severely troubled man into the poster child of quirky artists. He became known for his mental breakdowns, cutting off his ear and allegedly eating paint.

Vincent van Gogh should not be immortalized as an artist whose mental illness empowered his talent. He should be seen for what he was: a man merely trying to live, who expressed that desire through art.

Phoenix Grubbs is a senior double-majoring in English with a creative writing focus and professional and public writing. They are an aspiring author and copyeditor, and they adore all things fantasy and sci-fi.