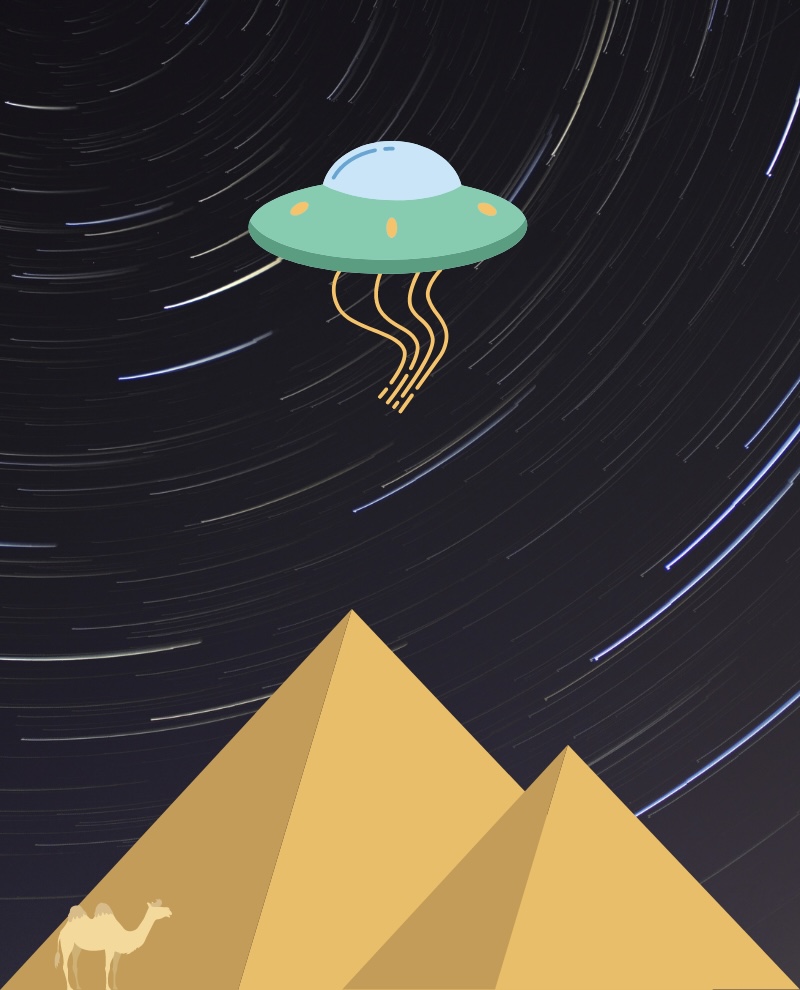 Conspiracy theories make for compelling and entertaining content virtually everyone has encountered. Nearly half of Americans believed at least one conspiracy in 2014, with these theories easily accessible on social media. TikTok carved out a popular niche for this content thanks to one pervading problem, always lurking yet conveniently hidden from the user—the algorithm.

#ConspiracyTok currently boasts over 1 billion views, with #Conspiracy racking up over 9 billion and counting. Conspiracies are not inherently dangerous; a healthy amount of societal skepticism is necessary. However, in an age of misinformation and internet culture, not every conspiracy theory can be trusted, either.

Conspiracy theories never exist in a vacuum. One popular model representing the wildly different levels of conspiracy is Abbie Richards’ 2021 Conspiracy Chart. The interactive chart begins in the realm of reality with true events such as the horrendous cover ups of Operation Paperclip and MKUltra. From here, the chart gradually escalates until one reaches the “antisemitic point of no return” and becomes fully detached from reality. Included at this level are theories of secret satanic rituals, adrenochrome and reptilian overlords, or in other words, major tenets of QAnon. Born on fringe message boards in 2017, QAnon, linked to the Jan. 6, 2021, Capitol insurrection,  has become mainstream.

Some theories may appear relatively harmless, and unless they dig deep enough, people are apt to believe them. In more dangerous cases, these theories began as tools used to propagate hate and libel against marginalized groups, most commonly the Jewish community. Even seemingly absurd theories of “lizard people” and the “global elite” are rooted in deeply disturbing beginnings.

Popularized by David Icke in 1998, his claims of a bloodthirsty reptilian race plotting to take over the world were intentionally evocative of age-old defamation alleging that a cabal of Jews run the world and drink the blood of Christian children. The Jewish community has been the scapegoat at the heart of almost every conspiracy throughout history. Through the popularity of TikTok, these violent inventions are able to live on and expand.

It’s important to practice discernment when faced with any conspiracy, especially those suspiciously akin to QAnon. Often venturing into religious territory with claims of Satanism, sacrifice and Armageddon, this content can easily become a gateway to the anti-vax movement, with some theorists on TikTok even declaring the vaccine as “the mark of the beast.”

The mark of the beast is a sign of Revelations in the bible, launching the beginning of the end times, which many conspiracy theorists believe is now starting. This content is pushed to incite fear, urging people to distrust all levels of government and oppose any public safety measures.

“Astroworld,” a poorly organized festival put on by Live Nation and Travis Scott, left ten dead and hundreds injured. It has since become a hot topic on #ConspiracyTok. Despite the tragedy, conspiracy theorists have sparked a modern satanic panic narrative, suggesting that Travis had orchestrated this concert as a ritual. The claim that celebrities and the “elites” are involved in satanic sacrifice is nothing more than a fear tactic no different than religious extremism and TikTok theorists are unfortunately taking the bait.

Karen Douglas is a professor of social psychology at the University of Kent with a focus on beliefs in conspiracy theories and their consequences. According to Douglas, conspiracies date back to Ancient Rome, but the introduction of social media fueled their spread. In an interview with the American Psychological Association, Douglas explains that people are drawn to conspiracies to satisfy three important psychological motives: epistemic, existential and social.

Epistemic motives refer to the need for certainty and the desire to have information. When times are tense and people are scared, they seek an explanation and long to know the truth. “So they’re looking for that knowledge and certainty, but not necessarily looking in the right places.” Existential motives refer to the need for safety and security, as well as the wish to have some kind of control in a spiraling society. Lastly, social motives refer to the desire to feel important among a group, as if the believer has some sort of secret knowledge that others don’t. This is commonly seen on TikTok, where theorists may refer to the general public as “sheep” or “asleep.”

TikTok’s algorithm works by curating a “For You Page.” The more users interact with content by liking, following, sharing and commenting, the more the algorithm pumps out similar content. Back in December, the New York Times obtained a document produced by TikTok’s engineering team titled “TikTok Algo 101.” The report detailed that, unlike any other app, TikTok’s algorithm works to reveal users’ deepest desires and unconscious beliefs, giving many users the eerie feeling TikTok is reading their mind.

The genius of the algorithm lies in its subtlety. According to the Wall Street Journal’s investigation, “the app takes note of subtle cues, such as how long you linger on a video, to zero in on what users really want to watch. Over time, the video choices become less mainstream, less vetted by moderators, and sometimes more disturbing.”

It only takes one interaction with a video of an innocuous conspiracy of aliens or celebrity deaths on the FYP for the algorithm to take the user somewhere they never meant to venture. After a good amount of scrolling and interacting, the surface-level theories begin to slow down as the algorithm makes room for the abyss. Anybody can get sucked into these. It is proven that the brain can be tricked into believing anything in its focus if reinforced long enough. The longer one watches and interacts, the more Tiktok will feed them this content. Most users get sucked in unknowingly until it completely consumes their life.

While other social media platforms are urged to crack down on conspiracies, TikTok encourages users to fall down the rabbit hole. By pushing content at a rapid rate once someone engages, the algorithm is able to perfectly curate massive communities of like-minded theorists. Without much opportunity to be challenged, these content niches quickly become echo chambers.

For the first time in 2021, TikTok surpassed Google as the most visited website. Google is not perfect and certainly has its problems, but in a sphere where there is no sufficient fact checking, where interactions enable groupthink, this is concerning. According to Douglas, “people can become consumed by this information. They can only seek out this information online. So they go to particular sources [and] disregard other sources that contradict their views so that their attitudes about these particular alleged conspiracies can become even more polarized.”

Content that does well on #ConspiracyTok includes clips derived from TV shows such as “Ancient Aliens” on The History Channel. The show promotes the idea that extraterrestrials visited Earth and introduced humanity to civilization and technology, such as the theory that aliens built the pyramids. “Ancient Aliens” has previously been criticized by the Smithsonian.

One popular account, @zoharstargate, perpetuates these same theories. Sharing clips of so-called doctors and professionals, the account with over 1 million followers asserts wild claims such as the bizarre theory that the moon is a machine built by aliens to monitor humanity. Besides being a subplot of “The Truman Show,” this is just objectively false. This TikTok has over five million views.

Luckily, there are some users who have dedicated their accounts to debunking these claims. User @miniminuteman, who studies archeology and anthropology, creates educational and entertaining content to draw people away from these fringe theories and back into reality. He often duets conspiracy content creators, presenting them with discrediting evidence.

“Q” has recently stopped posting, but QAnon lives on, with over 40 candidates who publicly declared their support running for office in 2022. According to a poll released by the Public Religion Research Institute, 15% of Americans believe “the levers of power are controlled by a cabal of Satan-worshiping pedophiles [and that] American patriots may have to resort to violence.” A staggering 20% of all Americans believe “there is a storm coming soon that will sweep away the elites in power and restore the rightful leaders.” When adjusted to the population, “that’s more than 30 million people,” as popular as some mainstream religions.

As the coronavirus spread around the world, more conspiracy followed. In her interview with Douglas, Kim Mills, senior director of strategic external communications and public affairs for the American Psychological Association, said, “Last spring, dozens of cell phone towers were set aflame across Europe, amid conspiracy theories that the 5G towers were spreading COVID-19. In January, a Wisconsin pharmacist was charged with deliberately destroying hundreds of doses of the newly available COVID-19 vaccine because he believed a conspiracy theory that the vaccine would change human DNA.”

It is difficult to find extremist theories that do not result in real-world violence. The 2020 Nashville bomber was known to be one of these extremists, due to “statements the suspect made about an internet conspiracy that powerful politicians and Hollywood figures are actually lizards or other reptiles who have extraterrestrial origins and are taking over society.” A bizarre story from The Seattle Times details how a 26-year-old man was charged with second degree murder after killing his brother with a sword because, in his own words, “God told me he was a lizard.”

TikTok remains immensely popular due to its unique ability to bring people together, creating communities of like-minded individuals when people are lonelier than ever. Regardless, the app may also pose potentially serious risks as the algorithm carefully monitors and tracks users’ activity to uncover their hidden interests, and in many cases, lead them down an alt-right pipeline.
Feeding off fear, conspiracies rise in popularity during times of uncertainty and unrest. People are scared, want to know why and long to feel in control. If a close friend or family member has been swept up in conspiracy content, some may feel inclined to cut them out of their life completely. Experts say they should talk to them. For those who have fallen this deep down the rabbit hole, the thought of getting them out can feel impossible. While it’s best to be realistic, do not give up on them.

Amanda Kiefer is a junior double-majoring in English and professional and public writing, with a focus in literary studies. She is currently exploring her passion for editing as well. In her free time, she enjoys finding new music and watching old horror movies.