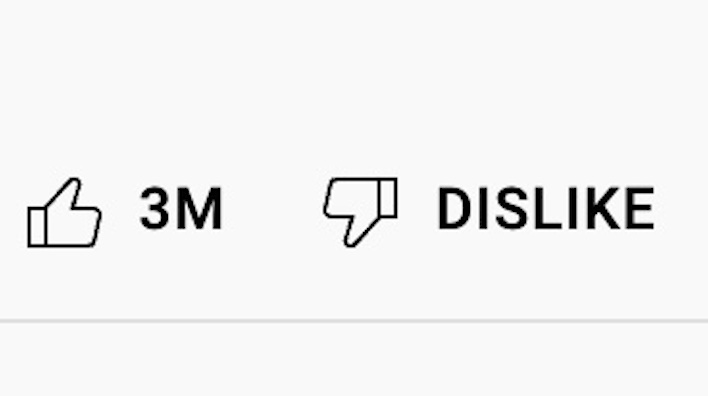 When YouTube announced they would begin gradually removing dislike counts from all of their videos at the end of 2021, it was met with significant pushback. Many creators and fans alike felt that the removal of the dislike count, or number of dislikes, was breeding ground for increased misinformation and censorship on the platform. Even though the button remains, with the dislike count gone, many viewers feel that YouTube is a fundamentally different platform and that YouTube is making this change with only themselves in mind.

YouTube’s reasoning behind the change was to protect its creators from harassment and “dislike attacks,” or conjoined efforts by a group of people to dislike certain videos. The YouTube team wrote on their blog page that they “heard directly from smaller creators and those just getting started [on YouTube] that they are unfairly targeted” by dislike attacks on their videos. If viewers could no longer see the dislike counts on videos, then there would be less of an incentive to dislike attack it, as the only person able to see dislikes would be the creator of the video.

The anti-harassment and bullying explanation YouTube provided didn’t cut iit for many. YouTuber PewDiePie, who has the most subscribers of any individual on YouTube (over 111 million), made a video on the topic, addressing YouTube’s decision to remove the count visibility. PewDiePie points out that prior to the mandatory removal of the dislike count across all videos, creators could change the settings on their videos to remove the dislike count, allowing them to prevent dislike attacks if they wished to do so.

PewDiePie also questions the necessity of the change by pointing out that large amounts of dislikes are often not harassment but instead are displays of frustration with certain pieces of content. For example, YouTube’s video “YouTube Rewind 2018: Everyone Controls Rewind” amassed over 10 million dislikes prior to the removal of the visible dislike count. While this could be viewed as a targeted dislike attack, most people would argue that the dislikes stem from the community’s issues with the video, as the video featured very few creators—and the ones it did feature were not very popular.

Mason Sands wrote for Forbes Magazine that in YouTube’s 2018 Rewind video, there was a “blind insistence on purely advertiser-friendly creators” and there was an overall “lack of connection with the community.” Many viewers saw YouTube’s video for what it was—a branding stunt, not an accurate representation of the platform. The video quickly became the most disliked video on YouTube, which led to the company to apologize in their 2019 rewind video for their shortcomings.

Here, the dislike button was used for something good: challenging the intentions of large corporations and demanding accurate representation. Many people speculated that YouTube was upset their 2018 Rewind video held the record for most disliked video, but the dislike button was what held them accountable and led them to apologize. Without it, the public dissent towards the video would have been easier to deny or ignore.

Accurate representation may suffer following YouTube’s change. How-to videos once disliked for their false, misleading or dangerous content won’t have their dislike counts posted after the new change. YouTuber Ann Reardon, who has over 4.83 million subscribers, has several videos that discuss false and misleading cooking how-to videos. In it, she tests recipes from scam channels such as “So Yummy,” a channel known for deceptively recycling content and creating tutorial videos more theatrical than accurate. While making the recipes herself and showing viewers not everything is as it seems, Reardon points out that misleading videos prosper on YouTube if they have good branding, and there are very little checks to keep them in place.

The removal of the dislike count takes away an important check people had on these videos in the past. Without the dislike count, it becomes harder to tell whether or not a video is accurate or user-approved. YouTube says in their FAQ section in the comments of their video about removing the dislike count that “comments are still a good way to get a sense of a video’s quality, especially for tutorials and educational videos,” but they conveniently don’t mention that creators have free reign to turn off their comment sections.

Additionally, creators can delete any comment from their videos, meaning they have full censorship over their comment section. Previously, a reliable way to judge a video’s quality was by looking at the dislike count. If the like/dislike ratio was turned off, it was clear that the video creator had done that for a reason and should be viewed with a lens of doubt. Now, there is no way to judge the video in an unbiased manner.

When a video has neither a comment section nor a visible dislike count, it is virtually impossible to tell whether the video is accurate or not without viewing it and researching/trying it. In addition to possibly being a waste of time, this increases the risk of misinformation. The longer someone views a YouTube video, the more engagement it gets and the more likely the viewer is to sit through an advertisement directly providing the uploader with a payout.

The catch? Creators have to apply to be monetized, and only successful creators stand a chance at getting it. A creator needs to have more than 30,000 subscribers to be part of the monetization program, meaning small creators are not eligible to profit off of their YouTube videos.

This inherently means YouTube’s removal of the dislike count directly harms small creators. Instead of switching off large spam creators like “So Yummy” after seeing large dislike counts, viewers sit through the video to determine its accuracy, meaning they don’t click on the alternative—smaller creator’s videos on the same topic. And this directly profits the larger creators, allowing them to grow their channel and turn certain sections of YouTube into monopolies.

The YouTube dislike count may have the exact opposite impact of its supposed intentions to help small creators. Even Susan Wojcicki, CEO of YouTube, contributed to the narrative that small YouTubers would be helped by the policy.

The real reason behind YouTube’s implementation of the policy is simple: branding. Critique against their largest channels makes YouTube look like an unreliable platform. Heavily disliked videos could be indicative to some viewers of YouTube’s standards and video quality—or lack thereof. The policy is good for YouTube; an absence of visible dissent makes the platform seem more inviting, informative and positive.

Unlike other social media platforms, YouTube is designed to be an information bank. The search bar, emphasis on how-to and tutorial content, and reputation all make avoiding misinformation a crucial component to maintaining YouTube’s success as a platform. Dislike buttons or other similar features are less significant on other platforms such as Instagram or TikTok because of the lack of an informational presence on those apps compared to YouTube.

A couple of inventive viewers have come up with solutions to the misinformation problem, such as a downloadable dislike plugin created by the developer “returnyoutubedislike.com.” However, unless YouTube reverses their policy, the most important thing viewers can do is watch out for misinformation themselves and be sure to check multiple sources.

While it may no longer be possible to publicly flag deceptive creators in the form of a dislike, it is still possible to find helpful information by watching multiple videos, looking at various other websites, and consulting others on social media for their opinions. Or perhaps by simply reading a book.

Gabriel Sandoval is a junior majoring in comparative cultures and politics with an additional major in professional and public writing at Michigan State University. If he’s not working or sleeping, he’s likely watching the first episode of a television series that he will never finish.