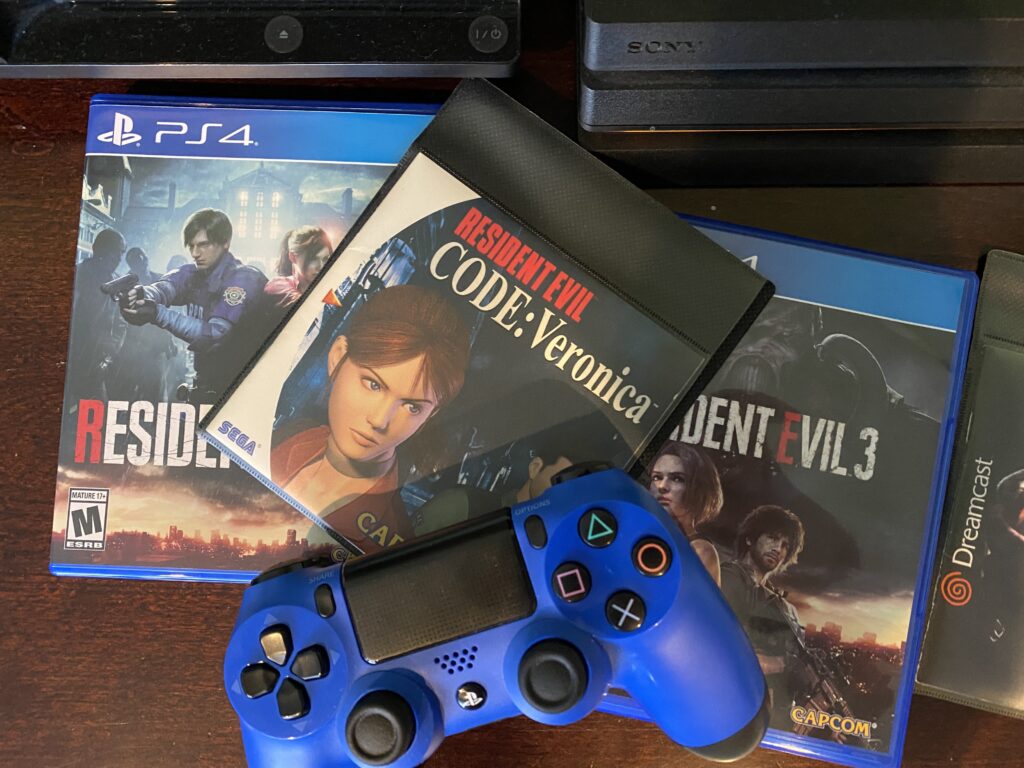 Since the release of the first ever Resident Evil game in 1996, the series has gripped the survival horror video game market and the medium in general. Developed by Japanese studio Capcom as their flagship title,Resident Evil has expanded to become one of the largest and most well-known franchises in the decades since its release.

As pioneers of their field, Capcom has majorly influenced both the survival horror video game genre as well as the video game world in general. It is arguably because of this reputation that Capcom’s blunders with some of its installments have been met with so much backlash. Resident Evil has been ahead of its time and set the standard for its successors, popularizing many aspects of video games that have become staples of the franchise. While the games have always had a solid fanbase, Capcom’s development choices have often caused huge dissent among players.

Resident Evil 4, 5 and 6 have been highly criticized by series fans, and it’s not hard to see why. While the first three games in the series stuck to the plot of viral outbreaks taking place in the Arklay Mountains and small town of Raccoon City, the games following 1999’s Resident Evil 3: Nemesis suddenly had beloved characters jet-setting across the globe in increasingly action-oriented situations, each game getting further and further away from the franchise’s survival horror roots.

In 2004, Resident Evil 4 brought back Resident Evil 2 protagonist, Leon Kennedy, but sent him across the map on a mission to investigate a Spanish cult and save the president’s daughter. Resident Evil 5 included one of the serie’s original protagonists Chris Redfield and sent him to Africa where he is tasked with containing yet another viral outbreak and saving his former partner along the way. Resident Evil 6, arguably the worst offender, almost entirely abandons the idea of survival horror and sends the seven—yes, seven—main characters everywhere from the fictional locations of Tall Oaks, USA to Lanshiang, China, once again attempting to contain a viral outbreak but on a much larger scale.

Despite Resident Evil 4 being the first game to directly step away from the series roots, it has still been highly praised and is considered one of the best games of all time. Despite Capcom beginning to implement newer techniques like the over-the-shoulder perspective, movable camera—still weak, but a far cry from the fixed-camera angles of previous installments—and faster pacing, the roots are still there. While it certainly takes a step in the direction of action games, and has faced heavy criticism for doing so, Resident Evil 4 did so without devolving entirely into a third-person shooter, unlike the two numbered installments to follow.

While Resident Evil 4 was a step away from the previous installments, the action-oriented aspects were generally seen as improvements on the genre. The map was expanded and required the player to travel much more than the other games that restricted players to a select few locations wherein retracing your steps was the key to making it out alive. RE 4 gives the player some opportunity to revisit locations but ultimately takes them on a more linear journey across the map.

The inventory management system was still a key feature but focused more on a Tetris-style inventory, which gave players more room to mess around with the items they carried, often forcing them to get creative in order to pick up an item they wanted but didn’t really have room for. While this and the lack of an item box was frustrating at times, many still viewed it as an improvement on the extremely limited inventory space given to characters in the previous games—especially because in RE 4, inventory management was almost an enjoyable minigame of its own.

A notable difference between RE 4 and its predecessors was the transition from a slow paced, zombie-infested bid for survival to the introduction of hordes of enemies that you couldn’t simply run away from. Much of the gameplay of the first three games required the player to consider the resources they had at hand, the level of danger and the environment to decide whether to choose the fight or flight option. In some cases, players could survive without killing anything.

This is still the case in RE 4 to a certain extent. If a player desires, they could try to avoid small enemies and only bother with bosses. However, it is much harder to do this successfully when greeted with masses of enemies who all want to kill. The increased presence of enemies as well as the larger selection of weapons and the game’s generosity with ammo make running in, guns-a-blazing, the more favorable gameplay style. Still, the opportunity to fall back on older playing styles kept the game from truly becoming an action game, which did not go unnoticed by fans.

Because of Capcom’s groundbreaking developments with Resident Evil 4, series fans were excited to see what the fifth game would have in store four years later. And what they got was underwhelming, and racist to boot. As soon as the early trailers for the game were released, there was immediate backlash over the WASP protagonist traveling to Africa and slaughtering hundreds of impoverished Africans. Following the outcry after the initial trailer’s release, Kotaku reported that producer Jun Takeuchi told them “Cries of racism ‘didn’t have any effect on the game design,’” and you can tell.

While some claimed the depicted slaughter was justified because the civilians were “infected,” Capcom’s depiction of African people even before infection is rooted in racist stereotypes. One of the most notable examples is right at the start of the game, where a group of uninfected, average civilians are viciously beating something clearly struggling inside a bag. As said by Dan Whitehead for Eurogamer, “Since the Majini are not undead corpses, and are capable of driving vehicles, handling weapons and even using guns, it makes the line between the infected monsters and African civilians uncomfortably vague.”

The gameplay and mechanics weren’t newsworthy, either, keeping much of what Resident Evil 4 was praised for and adding to it for varying levels of fan approval. The AI companion, Sheva, is either great or terrible, depending on who a person talks to. And Resident Evil 5 is the first numbered title to have a co-op mode—again, either loved or hated depending on the player. Despite its detractors and controversy, it is still considered a moderate success and a decent game, or, as Diamond Feit for Retronauts puts it, “a middle-child blockbuster.”

Despite all of this, the Resident Evil franchise continues to grow. After the announcement of the sixth installment in 2012, Christian Svensson, part of Capcom’s planning and business team, told GameInformer, “The pre-orders for Resident Evil 6 are off to a fantastic start. The best start a Resident Evil game has ever had.” But all those pre-orders couldn’t save the game from the colossal amount of backlash it would receive upon release.

What exactly is wrong with Resident Evil 6 depends on how long someone has to sit and listen. Most obvious is the clear emphasis on making the game more action-oriented and very clearly trying to stick with the times. This is made evident by the game’s melee combat, turret sections, cover systems, quick time events and, oh yeah, the part where players have to fly a fighter jet to progress the plot.

While these elements are common in games now, these trends were just kicking off in the early 2010’s, and Capcom’s integration of them into their games felt ingenuine to many players. Granted, many of these gameplay elements were introduced in RE 5, particularly the QTEs and turret sections, but the addition of others and the game’s focus on action rather than horror made it clear to fans what Capcom was prioritizing.

Capcom was striving for the numbers set by action games of the time, namely Call of Duty. Producer Masachika Kawata told Game Developer (formerly Gamasutra), “Looking at the marketing data [for survival horror games] … the market is small, compared to the number of units Call of Duty and all those action games sell,” he said. “A ‘survival horror’ Resident Evil doesn’t seem like it’d be able to sell those kind of numbers.” Yet, around the same time, a different producer, Yoshiaki Hirabayashi, told IGN that “the concept [they] had in mind was to deliver the ‘ultimate horror entertainment.’”

What is now recognized as the middle chunk of mainline, numbered games are a clear representation of Capcom’s development as a studio and their work to lead the survival horror genre and keep up with the rapidly changing gaming interfaces of the time. The fourth and fifth installments have been heavily praised and criticized, with the sixth becoming almost a smear on Capcom’s once-stellar reputation in the gaming world. It seems Capcom preferred to keep up with the games of the seventh generation of consoles rather than continue with what the series was truly known for.

Despite remaining one of the company’s best-selling games, Resident Evil 6 was viewed as such a major failure by fans that many were unsure if the franchise would recover. It was so severe that Resident Evil 7, which was originally supposed to strongly resemble the formula established by 6, was scrapped completely.

Resident Evil 7: Biohazard, released in 2017, has almost nothing to do with the rest of the franchise, story-wise. And surprisingly, people were happy. The over-a-decade-old story of the original core four going through infected city after infected city was tired. While there was a general cry for Capcom to bring the Resident Evil franchise back to survival horror, there was a simultaneous plea for a change of pace in terms of storytelling. Biohazard addressed both issues, and fans finally had something to be excited about.

Biohazard lowered the stakes and ramped up the horror. Instead of world-ending stakes, new protagonist Ethan Winters travels to Nowhere, Louisiana to search for his wife five years after her disappearance. Opting for a first-person experience for the first time in the series, the action is swapped for pure horror. Biohazard is terrifying in the best way possible. It clearly deviated from the path its predecessors had been on, channeling the energy of the first three games instead.

And it worked. Fans everywhere rejoiced that finally, five years later, Capcom listened to their audience and truly delivered. Even better, the franchise has continued to receive praise for later games released, including remakes of the second and third Resident Evil games in 2019 and 2020, respectively, as well as Resident Evil Village, the highly-anticipated eighth installment, in 2021.

As of this writing, Biohazard is Capcom’s best-selling Resident Evil game, and fans and critics alike have praised it for saving the franchise. Capcom has proven it is possible for a franchise to recover. Fans watched the games stray so far from their roots that many were scared the series had lost its identity entirely. But they also saw the triumphant return of the series to the very genre it invented.

After nearly two decades, Resident Evil has found its way back to survival horror.

Julita Fenneuff is a senior majoring in professional and public writing with a minor in Spanish. She has a deep interest in pop culture and wants to make a change with her writing. In her spare time she enjoys reading, playing video games, and spending time with her pet bunny.