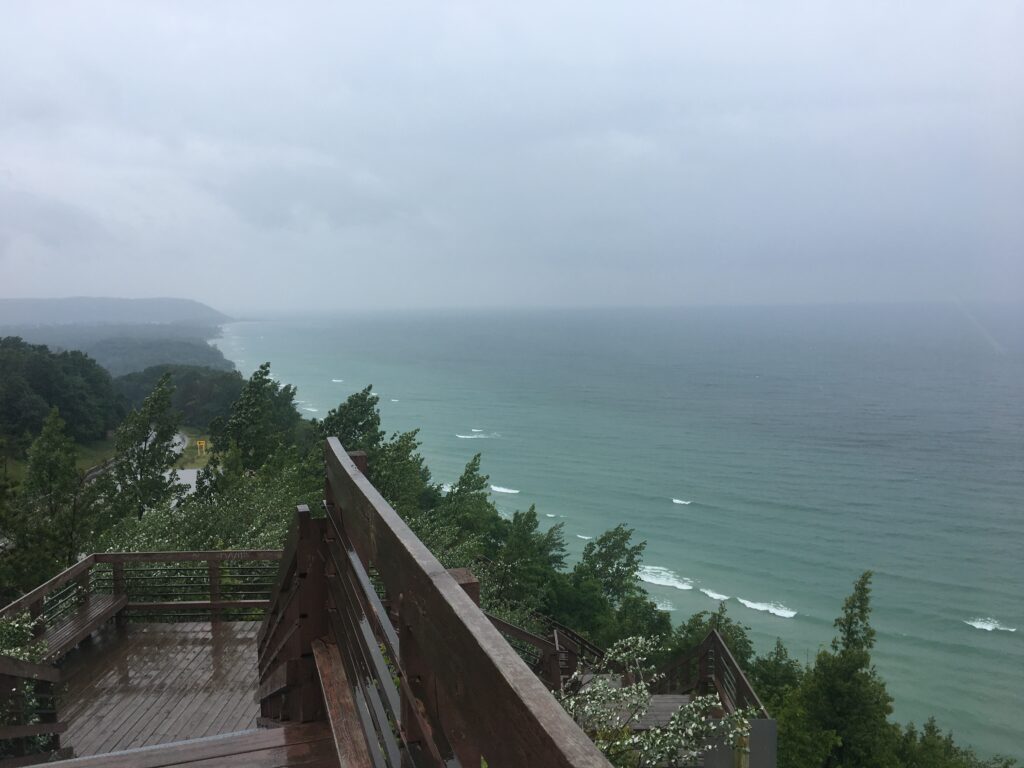 There’s a ticking time bomb in the Straits of Mackinac and it goes by the name of Line 5. Operated by Enbridge, a Canadian-owned pipeline company, Line 5 is an oil pipeline that runs through the most ecologically vulnerable area in Michigan and is almost 20 years past its structural expiration date. Each day that the pipeline continues its operation, the threat of environmental devastation in the Great Lakes grows.

It is no longer a question of if the pipeline will rupture, but when. Line 5 was built in 1953 and was only intended to withstand 50 years of wear and tear. The pipeline has already been struck twice by anchors and shut down several times due to hail storms and winter conditions. A spill—which is inevitable, given the current conditions of the pipeline—would be challenging to contain and could devastate the Great Lakes, Michigan communities and Michigan’s economy.

Each day, Line 5 carries 23 million gallons of oil across the Straits of Mackinac. In a best-case oil spill scenario, Enbridge would be notified immediately of the spill, shut off the pipeline, and at least one million gallons of crude oil and natural gas would surge into the Great Lakes.

Even the best-case scenario would cause long-lasting environmental damage, which is compounded by the fact that little is known about cleaning up oil spills in freshwater areas.

According to an article published by the International Institute for Sustainable Development, “The implications of potential spills for freshwater systems and their surrounding environments remain uncertain. Because many methods for cleaning up oil spills were developed for the ocean, we also do not know which are most effective in freshwater systems.”

With little known about freshwater oil spill clean ups, the state of Michigan is utterly unprepared to contain and combat the effects of an oil spill in the Great Lakes.

According to David Holtz, Communications Director of Oil & Water Don’t Mix, a coalition working to shut down Line 5, “The most oil that could be recovered in the best-case scenario is 30%. That means that all of that area, which is a migratory bird area, Native rice farming area and fish population area, all the biological community structure of the Straits of Mackinac would be damaged.”

For Indigenous communities in Michigan, this ecological damage threatens their treaty rights, established by the 1836 Treaty of Washington.

According to an article published by NPR’s Michigan Radio, “The Indigenous Anishinaabe people—Chippewa and Ottawa peoples—signed the Treaty of Washington and ceded nearly 14 million acres of territory to the settlers, or 40% of the state of Michigan. This land included the northwest area of the Lower Peninsula and the eastern portion of the Upper Peninsula. In return for signing, the treaty guaranteed the Anishinaabe peoples reservation lands and forever access to all natural resources, including fishing and hunting rights.”

There is no way for Anishinaabe people to survive on natural resources destroyed by an oil spill. For years, Indigenous communities in Michigan have been advocating for the shutdown of Line 5, and all 12 federally recognized tribes in Michigan have written to the Biden administration, urging the government to revoke the presidential permit for Line 5. However, on November 9, The White House confirmed that the Biden administration does not plan to take action on Line 5.

“If a resource that a treaty right depends upon is destroyed, you almost have a causal chain effect where the treaty right was violated, the resource was destroyed, and then the way of life—the very existence of Indigenous people—is also then destroyed,” Whitney Gravelle, chair of the Bay Mills Indian Community, said in an article published by Michigan Radio.

An oil spill would not only cause irreversible environmental damage but would result in the shutdown of all intakes of valves for drinking water for every community close to the spill, like Mackinac Island and St. Ignace. Shipping and boat traffic would also cease immediately.

“The impact of closing shipping in the Mackinac Straits is about 50 billion dollars because it’s a major shipping area,” Holtz said. “Everything that goes to Chicago goes through the Straits.”

An oil spill wouldn’t just be contained to the Straits of Mackinac, either. University of Michigan Water Center researcher Dave Schwab found that more than 700 miles of shoreline in Lake Michigan and Lake Huron would also be impacted if Line 5 bursts. The study also found that nearly 60% of Lake Huron’s open water could be affected by the oil spill.

With a vulnerable structure and undeniable evidence of an impending disastrous oil spill, Enbridge’s continued operation in Michigan is unnerving. The company’s questionable occupation was finally addressed by Michigan Governor Gretchen Whitmer on Nov. 13, 2020, when she revoked the 1953 easement that Enbridge used to operate Line 5. The termination gave Enbridge until May 2021 to cease operation of Line 5 under the Public Trust Doctrine to protect the Great Lakes.

Public trust doctrines address the issue of ownership over public common spaces like beaches and lakes, establishing that the public owns and governs public spaces. In the case of Michigan’s freshwater, “The Great Lakes belong to all of us. It’s in our DNA,” said For Love of Water Executive Director Liz Kirkwood. “We know that those waters that surround us, that bathe us, that nurture us underneath our feet, are inalienable rights for all.”

Enbridge disagrees; the company defied Governor Whitmer’s orders of a shutdown and continues to pump oil through Line 5. The company escalated the pipeline battle by invoking a 1977 treaty that states Canada and the U.S. must allow natural gas and crude oil to flow between the two countries. Enbridge and the state of Michigan are now locked in a court-mandated mediation that could last months.

There’s plenty of information about Line 5 that Enbridge would like to keep hidden from Michigan residents—so much that the company spent over $6.9 million on persuasive advertising to bolster support for the pipeline. Billboards across the state claim economic downfall or pipeline safety, but this is a smoke and mirrors pantomime.

Despite these false advertising claims, there are valid concerns about the pipeline’s role in supplying propane to homes in the Upper Peninsula. Enbridge claims that Line 5 supplies 65% of propane demand in the U.P., but this is only a fragment of the full picture. According to Oil and Water Don’t Mix, The U.P. actually has 86 potential propane sources besides the resources from Line 5, and only 19% of homes in the U.P. use propane as a heating source. Michigan is fully prepared to survive without Line 5—the state already has a comprehensive five-step plan for propane security when the pipeline shuts down.

Enbridge would like Michigan residents to think that Line 5 is a crucial operation, but the pipeline’s benefit to Michigan is relatively fabricated. According to The Michigan League of Conservation Voters, only 10% of the oil and natural gas that runs through Line 5 ends up in Michigan. The rest makes its way back to Canada or is exported to Asia. Enbridge also only employs 116 people in the state of Michigan. These messages aren’t scribed across the interstate highway because Enbridge doesn’t want the public to know that Michigan assumes all the ecological and economic risk for Canada’s profit.

Line 5 isn’t the only negligent operation Enbridge has carried out in Michigan, either. In 2010, Enbridge’s Line 6B pipeline ruptured into the Kalamazoo River, spilling more than a million gallons of oil, resulting in the largest inland oil spill in history. The company was required to pay $61 million in civil penalties for their laxity, which displaced families from their homes near the spill.

The situation as it stands is this: the Great Lakes are occupied by a fallible oil pipeline that is operated by a company responsible for the country’s largest inland oil spill. Michigan assumes a massive ecological risk for Canada, who uses 90% of the oil and natural gas that flows through that pipeline. Line 5 will close eventually, but whether that’s due to a rupture or a manual shutdown is still at large.

It’s clear that Enbridge will wait until they are responsible not only for the largest inland oil spill in history, but also the largest freshwater oil spill as well. Michiganders don’t have the luxury of waiting because while oil refineries and pipelines can always be replaced, the Great Lakes cannot.