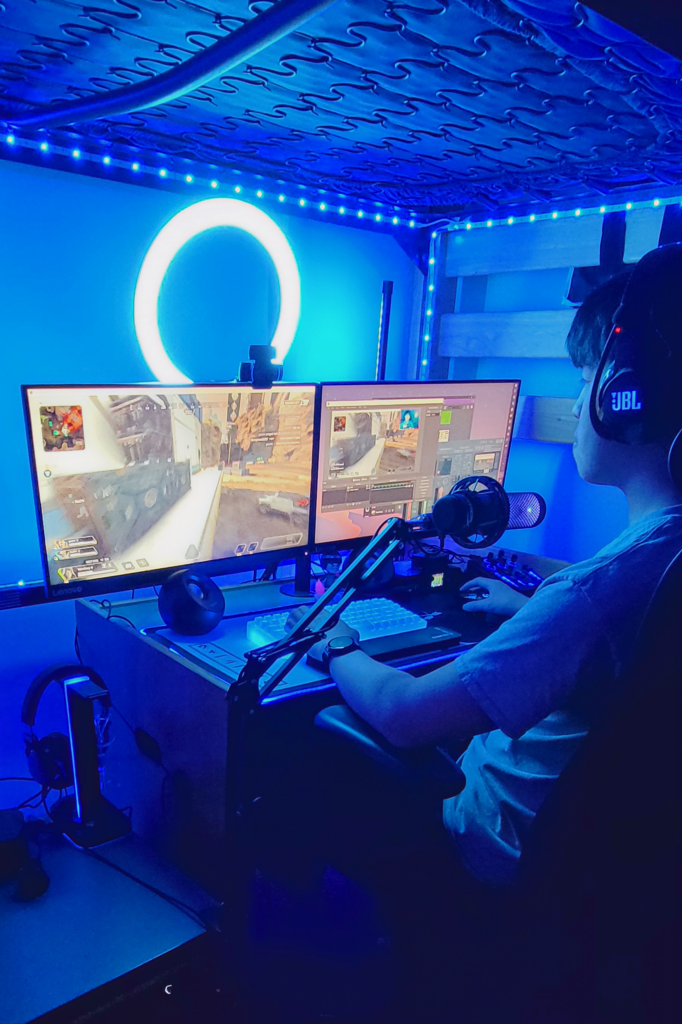 Light-emitting diodes, or LEDs, are the modern light source that have taken over bedrooms, vehicles and cell phones. Lighting no longer exists for the sole purpose of brightening up a space—it has found its place in design, technology and even health-related practices.

Many are buying into colored LEDs for visual benefits. “It spices up the room for the addition to my gaming setup,” said Chase Scarberry, an avid user of various LED lighting. “It makes me feel less attracted to only the screen I game on as the background lighting equalizes the lighting throughout the room.” Scarberry is not alone in this opinion. In fact, these multi-colored LEDs are becoming more and more popular, and for good reason.

Recently, LED light strips have become rather inexpensive. Amazon sells 50 feet of LED strip lights for around $20—compatible with voice-controlled Alexa for convenience, of course. This makes adopting colored LEDs into home interior spaces highly accessible and equally desirable. Subsequently, the low price and brilliant colors have made these strip lights popular with college students. At nighttime, the dormitories on Michigan State University’s campus look like Christmas trees, with nearly every other window glowing some flashy color. The future of lighting will become very different, and it is not far-fetched to say colored lighting will become the standard.

On the surface, it’s clear that colors offer an aesthetic for curious eyes, but they may affect behavior and moods, too. Lighting solutions store dmlights said that “artists and interior architects have long understood that colours can affect our feelings, emotions and mood. That is why the rooms in a hospital are often green—green calms and reduces stress. Other colours such as red, orange, yellow, blue, etc., have a different effect on the body.”

MSU junior Nick Freiburger said, “When I’m in my room at night, I turn on my strip lights so it’s a purply-blue color and it makes me feel super relaxed and calm.” Red light can be an intimidating color and creates a rather ominous atmosphere in a dark room. Comparatively, blue light seems to be favored among RGB light owners.

Unique wavelengths of light make different colors, and those with shorter wavelengths that humans can see are perceived as more blue. The longer the wavelength, the redder the light appears. Lights are also no longer limited to cool whites and warm yellows; LED lights often include a red, green and blue diode, or RGB. Adjusting the brightness of each LED color allows for 16,777,216 possible colors. This is how phones and TVs display colors, but RGB has also expanded to lamps, headphones, keyboards, etc.

Attributes of colors can be manipulated to convey different expressions. Three factors relate to RGB lighting, one of which is saturation. Saturation is the intensity of a color, where high saturation emphasizes colors for more emotion and low saturation makes them bland. Brightness is the amount of light produced, also correlating to emotion. Hue is a color or shade, which often induces happiness from natural light as opposed to artificial lighting. Many people have certain emotions toward different colors or certain temperatures or light.

While alluring, blue light is known to suppress melatonin, the hormone that induces drowsiness. Many device owners are guilty of using their phone or TV shortly before going to bed, minimizing the ability to rest effectively. “It’s hard for me to make a distinction between my phone and activities on my phone keeping me up and just the light itself, but I do notice if I put my phone away, I can definitely fall asleep a lot sooner,” said Justin Tran, an MSU alum studying medicine.

The Proceedings of the National Academy of Sciences of the United States of America said, “In the past 50 years, there has been a decline in average sleep duration and quality, with adverse consequences on general health. A representative survey of 1,508 American adults recently revealed that 90% of Americans used some type of electronics at least a few nights per week within one hour before bedtime.”

People who have transitioned to electronic books before bedtime are one example of how LEDs give rise to delayed and lower quality sleep. A sleep study analysis from interdisciplinary research and scholarly literature producer ScienceDirect showed that participants who read on light-emitting tablets experienced less evening sleepiness and took longer to fall asleep. They also had less melatonin secretion and were less alert the following morning.

Unlike the blue light that phones and laptops produce, red light has been observed to aid in getting quality sleep. Its longer wavelength is much further from ultraviolet light’s wavelength than blue light is, and it is less effective at inhibiting melatonin. Green light holds a wavelength that is in the middle of blue and red, making it less ideal than red for sleep, but better than blue light. Eugen of Lighting Info, a blog on lighting gadgets, said, “While blue light can suppress melatonin for about 3 hours, green light throws it off by only half that is for a maximum of 1.5 hours.”

As LEDs begin to find their place in homes and offices, it is natural to worry about the effects of overexposure to artificial lighting. The biggest concern here is excessive screen time. Phones, computers, TVs and other screens emit blue light which is considered phototoxic, chemically causing skin irritation from light.

“Sometimes at night I’ll have no lights on and just have my computer screen. When it’s like that, I’m like okay, this might damage my eyes or something if I’m just staring at a computer screen without any lights around me on, just the screen light. I feel like that could mess up my eyes,” said Freiburger.

Contrary to popular belief, blue light is “unlikely to pose a physical hazard to the retina,” said Harvard Health Publishing. There is no connection to age-related macular degeneration, a type of eye damage, from long-term exposure to low-intensity blue light, but eye strain and headaches may be symptoms. This makes long screen time sessions difficult for people susceptible to migraines and seizures, as most LEDs produce a slight flicker. Flickering is hardly noticeable by the eye but can still have adverse effects.

Children and teenagers’ eyes do not fully filter blue light, making screen time potentially more dangerous for them. Tran said, “Something that I’ve thought about is that since my eyes are fully developed now, I’m not as worried about getting that much screen time, but I know that younger children, they should be out in the sunlight and looking at farther distances so that their eyes can develop correctly, and if they’re just in front of a screen all day, that can really hinder their ability to develop their eyes correctly.”

In some instances, blue light during regular daytime hours can be beneficial as it increases alertness and productivity. LEDs can help regulate a schedule and compensate for those missing hours of natural lighting. “It can vary between other people but for me, yes, it does affect my circadian rhythm. The lighting is basically tricking the brain into thinking it’s still daylight outside even though it could be dark,” said Scarberry.

In more serious cases, blue light dramatically affected people’s lives. Blue lights were installed in 2009 on Tokyo’s Yamanote train platforms in an attempt to reduce suicide rates. Train platforms in other countries have applied the same blue lighting and saw suicides decline by 74% according to ScienceAlert. While there is no fully supported science to explain this, blue light indeed seems to calm and reduce impulsivity.

The limbic system of the body, responsible for behavioral and emotional responses, is also affected by the circadian rhythm, a bodily process that regulates a sleep schedule. Disruptions in sleep and schedules can induce sadness and other emotions. “It definitely makes you more depressed and down. I know lack of light is not good for an overall state of happiness. Winter definitely brings the mood down,” said Freiburger.

Winter can be a particularly hard time for people with Seasonal Affective Disorder, a type of depression associated with changes in seasons. This is especially true in Michigan, where the winter days are met with little sunlight, forcing people to switch on the LEDs in the afternoon. Combined with the recent effects of the pandemic, LED lighting uses have increased in numbers in the past few years.

Fortunately, light therapy is a common treatment for SAD. Light boxes can be purchased to simulate sunlight and combat SAD by using it within an hour of waking up but should be turned off during the day to not disturb the circadian rhythm. The Mayo Clinic says no prescription is needed but warns that light boxes are not regulated by the Food and Drug Administration for treating SAD.

The advances in lighting technology have made LED lighting highly versatile. RGB lighting has turned bedrooms into theatres and is becoming a useful tool in medicine. From lighting up keyboards to treating depression, LEDs have a variety of purposes. As popularity in their usage grows, the most concerning symptom may be the effects on one’s biological clock. If people can resist the urge to stare at their phones all night, LEDs will be a beautiful, colorful addition to the world’s standard of living.