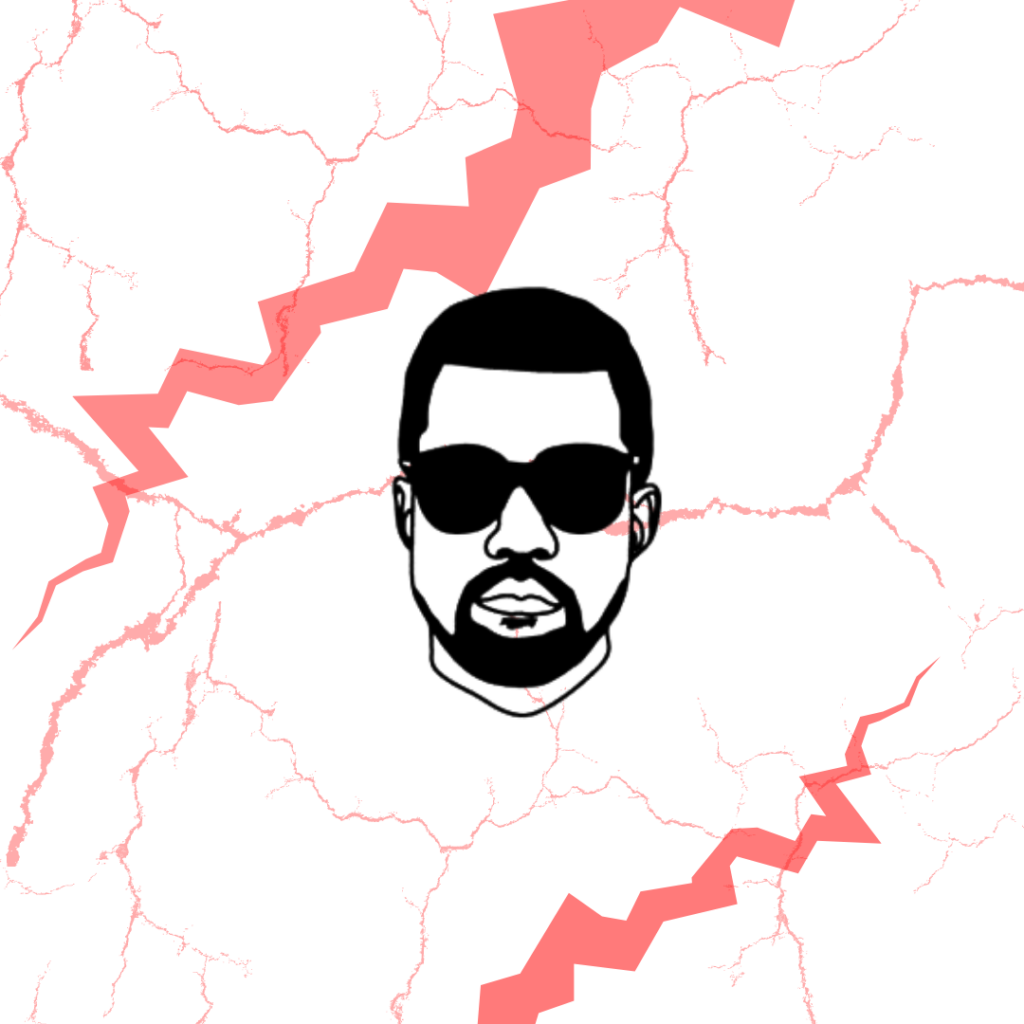 Kanye West is a well known name in the entertainment world and pop culture, an influential music artist who has grown in the industry for many years. His music has topped the charts, and his fashion brand Yeezy has flourished. However, West’s recent actions have taken a downward spiral toward something more serious, violent and harmful.

West has a history of mental health problems, spanning back decades. His actions overtime became erratic, and many believe the death of his mother, Donda West, in 2007 is a root cause of his spiraling mental health as he blamed himself for her death. He was diagnosed with bipolar disorder in 2016. Strange comments from West about running for president and spreading conspiracies are just a few of Kanye’s manic episodes society witnessed.

However, upon West and Kim Kardashian’s divorce, finalized on March 2, 2022, these unforeseen actions took a wild and abusive turn. As the divorce was being finalized, West openly and publicly made statements refusing the divorce, claiming he would fight for his family—including Kim and their four children, North, Saint, Chicago and Psalm—to be back together.

In a now deleted Instagram post, West posted a photo of oldest daughter North’s backpack, captioning it, “This was on my daughter’s backpack when I was ‘allowed’ to see her last week.” The backpack had three pins: Karsdashian’s face, West’s face and an alien. Kardashian commented on the post, saying, “Please stop with this narrative, you were just here this morning picking up the kids for school.”

West also made many comments about his children’s use of social media platforms such as TikTok, criticizing Kardashian’s parenting tactics. West released a video regarding the TikToks of his daughter, saying, “Hey everybody, I just got off the phone with Kim; I told her to stop antagonizing me with this TikTok thing. I said it’s never again. I am her father. I know y’all don’t respect fathers and the idea of family … I said, ‘I’m not allowing my daughter to be used by TikTok, to be used by Disney.’ I have a say so.”

When it became public knowledge that Kardashian was dating comedian Pete Davidson, West’s actions toward Davidson followed in suit of these harmful and public displays of anger, aggression and instability. West’s use of social media provided the entire world access to the drama and issues in these relationships, from text messages to angry instagram captions, all turning this harm toward Kardashian’s new partner, nicknamed “Skete” by West.

These antagonizing displays only worsened with West’s release of video for his new song “Eazy,” which displays a claymation replica of Pete Davidson being decapitated and buried alive. West even references Davidson by name in the song, with the lyric reading, “God saved me from that crash / Just so I can beat Pete Davidson’s ass.” With the claim of it being art, the depicted violence created controversy and uproar.

The reference of killing someone is not to be taken lightly and arguably cannot be considered an art form when it endangers the person it is representing. At the end of the video, a text blurb reads, “EVERYONE LIVED HAPPILY EVER AFTER / EXCEPT SKETE YOU KNOW WHO / JK HE’S FINE.” Not only does this jeopardize Davidson’s safety and mental health, but it also puts West’s ex-wife and family in danger.

West responded to the backlash on the video on his Instagram, saying, “Art is therapy just like this view, art is protected as freedom of speech, art inspires and simplifies the world,” and, “Art is not a proxy for any ill or harm. Any suggestion otherwise about my art is false and mal intended.”

Many disagreed with this defense, including Kardashian herself—an insider told Us Magazine that Kardashian “was appalled by this stunt and is rapidly losing the little patience she had left at this point.”

The escalation of this feud demonstrates how deep abusive and toxic behaviors can run. It can happen to anyone, even as powerful a woman as Kardashian.

TV host Trevor Noah commented on the situation, regarding how it resembles the experiences of many women in abusive situations.

Noah said, “What she’s going through is terrifying to watch, and it shines a spotlight on what so many women go through when they choose to leave. You know, people always say that phrase to women. They go, ‘Why didn’t you leave?’ … Yeah. Because a lot of women realize when they do leave, the guy will get even crazier. And when I say ‘crazy,’ I don’t mean ‘mental health crazy.’

“What we’re seeing … is one of the most powerful, one of the richest women in the world, unable to get her ex to stop texting her, to stop chasing after her, to stop harassing her. Just think about that for a moment. Think about how powerful Kim Kardashian is, and she can’t get that to happen.”

So where can people draw the line between freedom of speech and harmful intent? Instagram took action against West, placing him on a 24-hour suspension on March 16, 2022 for hate speech, bullying and harassment. Despite those actions, little can be done about the music videos West labeled as art. If art is meant to inspire, a video depicting the murder of an ex-wife’s boyfriend certainly only incites violence. Art expression can only go so far before it becomes dangerous.

Fan culture has become toxic and dangerous, and with a fan base as large as West’s, there is always the chance of people with ill-intent being a part of it. These suggestions only have to be interpreted wrongly by one person for things to take a turn for the worst.