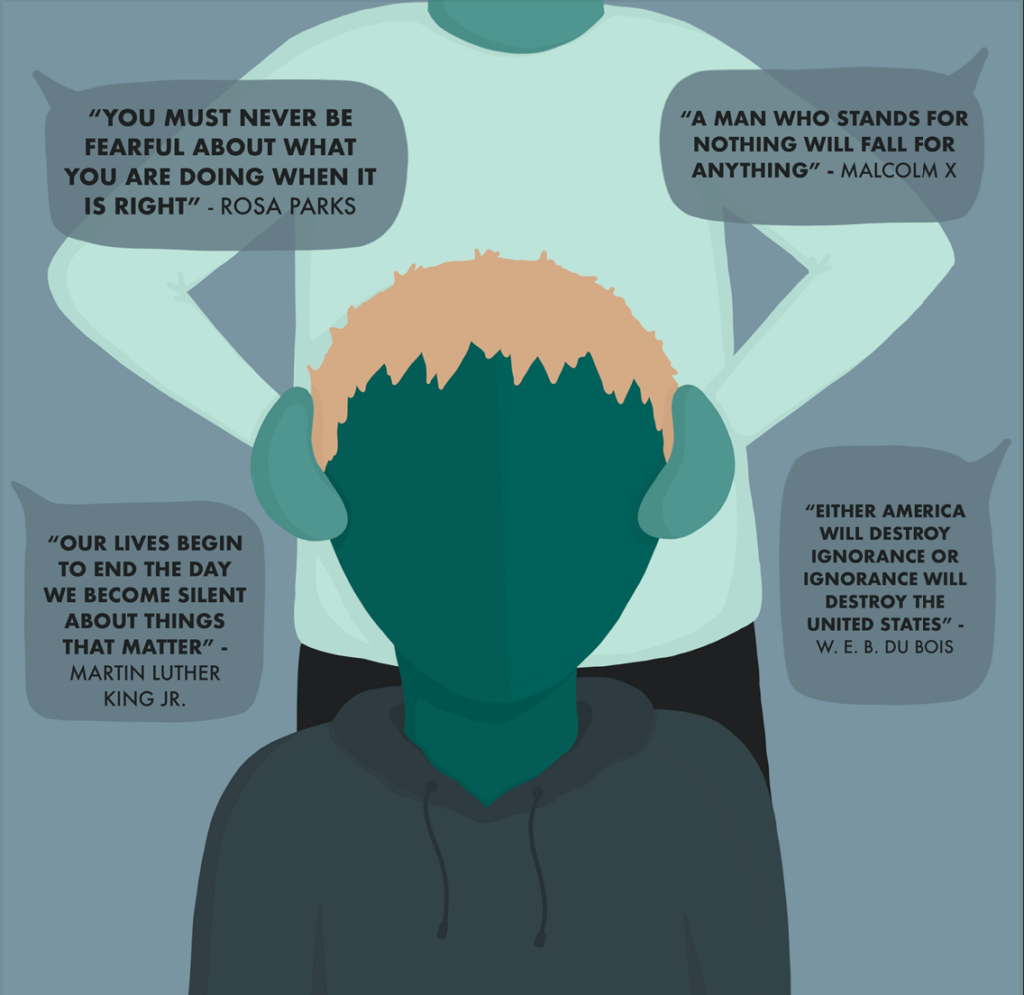 Critical race theory has been a prominent topic in politics lately. Republicans across the country have made it part of their agenda to oppose critical race theory, trying to pass a bill banning it from classrooms. Barbara Sprung from NPR says conservatives are dubbing it anti-racism. And conservatives like Condoleezza Rice say it “makes white kids feel bad.”

In an interview with MSU Today, Dorinda Carter Andrews, a professor and chairperson of the Department of Teacher Education at Michigan State University’s College of Education, discusses critical race theory and current events surrounding it.

“Critical race theory, or CRT, is a framework developed in the 1970s by legal scholars that argues white supremacy maintains power through the law and other legal systems,” she said. “CRT dismisses the idea that racism stems from acts of individuals but rather rooted in a system of oppression based on socially constructed racial hierarchy where white people reap material benefits over people of color resulting from misuse of power.”

Put simply, critical race theory is the teaching of the U.S. history of systemic racism — how various parts of society treat people of color and how the past has affected the present disposition of people of color. It studies disparities in medical treatment, housing, food network, education, media representation, the criminal justice system, etc. CRT explains how the nation’s past affects virtually everything in the present.

CRT teaches about how Black women are three to four times more likely to have a pregnancy related mortality than white women because they receive lesser quality medical service. The Centers for Disease Control and Prevention says that the disparities can be reduced if hospitals “address implicit bias in healthcare that would likely improve patient-provider interactions, health communication and health outcomes.”

The Academy of Medical-Surgical Nurses also says the health disparity can be attributed to implicit bias — including racism. Implicit bias is the unconscious favoritism toward or prejudice against people of a particular ethnicity, gender or social group that influences one’s actions or perception.

Critical race theory includes the origins of stereotyping, which is why some college students analyze the film Birth of a Nation in class to better understand the systemic racism CRT aims to explain. Paul McEwan at Muhlenberg College studies the film with his students to observe how such inaccuracies pushed by the media affect reality.

“The Birth of a Nation was an interesting example of the historical accuracy argument because it’s a film that no one would watch and say its inaccuracies don’t matter,” said McEwan. Critical race theory explains how the infamous film created the stereotype of all Black men being criminals and rapists, and how it consequently spurred the creation of Jim Crow laws, leading to mass incarceration. It also revisits and explains Black and Asian caricatures in American media to deconstruct implicit biases.

Critical race theory teaches the nation’s history of redlining, which consists of discriminatory housing practices and destruction of successful Black neighborhoods. It provides an explanation of Black Bottom, a once prosperous Black neighborhood in Detroit that was rich with business, and the unwarranted demolition of that neighborhood. The setbacks of the Black community are discussed and deconstructed by CRT so that Americans remember lessons of the past in pursuit of a better future.

Opponents of critical race theory believe that none of the aforementioned information should be taught in schools because it will make white people feel guilty — or even racist. Blake Masters, who is running for U.S. Senator in Arizona, called CRT “anti-white racism.” On the set of the talk show “The View,” when it came to the subject of CRT, former United States Secretary Condoleezza Rice said she doesn’t want to make white kids “feel bad for being white.”

“I would like Black kids to be completely empowered to know they are beautiful in their Blackness. But in order to do that, I don’t need to make white kids feel bad for being white. …This is a conversation that I think has gone in the wrong direction,” Rice said.

As of mid-May 2021, opponents of CRT have managed to outlaw it in schools in Idaho, Iowa, Oklahoma and Tennessee. A Washington post article breaks down critical race theory and the current political attacks on the subject:

“At least five Republican-led state legislatures have passed bans on critical race theory or related topics in recent months, and conservatives in roughly nine other states are pressing for similar measures. Some teachers have said they worry that the legislation will have a chilling effect on robust conversations, or could even put their jobs at risk, at a time when the nation is embroiled in a reckoning on race relations.”

Conservative activist Christopher Rufo is a loud opponent of critical race theory. In March, Rufo admitted to intentionally using the term to describe a range of race-related topics to instill a negative association in audiences.

“We have successfully frozen their brand — ‘critical race theory’ — into the public conversation and are steadily driving up negative perceptions,” wrote Rufo. “We will eventually turn it toxic, as we put all of the various cultural insanities under that brand category. The goal is to have the public read something crazy in the newspaper and immediately think, ‘critical race theory.’”

Many people are finding the opposition of CRT ridiculous and believe that CRT is only acknowledgement of the United States’ shameful history. In a recent interview with GQ, actor Will Smith commented on the recent political uplifting of Black Americans following the murder of George Floyd and protests against police brutality. “`Critical race theory,’ just call it ‘truth theory,” Smith said. “The pendulum is swinging in our direction beautifully. And there’s a certain humility that will most capitalize on the moment for the future of Black Americans, without discounting the difficulty and the pain and the emotion.”

The New York Times and The Washington Post also argue that if Germany could acknowledge its past––the Holocaust and the country’s willingness to side with Nazi ideology––and even teach about it in schools, so can the United States. In “Germany faced its horrible past. Can we do the same?”, an opinion essay for The Washington Post, Michele L. Norris cites how Germany confronts its past. Norris is a columnist and consultant for Post Opinions and founding director of The Race Card Project. In her article, Norris explains that Germany’s shameful history is being taught in classrooms and that Germany has taken measures even further to atone.

“In today’s Germany, children learn through their teachers and textbooks that the Nazi reign was a horrible and shameful chapter in the nation’s past. Cadets training to become police officers in Berlin take two-and-a-half years of training that includes Holocaust history and a field trip to the Sachsenhausen concentration camp. With a few exceptions for the sake of education, it is against the law to produce, distribute or display any symbol of the Nazi era, including the swastika, the Nazi flag and the Hitler salute. It is also illegal to deny that the Holocaust was real.”

Germany made it illegal to deny that the Holocaust was real while the United States takes pride in their protection of free speech. However, people are trying to outlaw the teaching of the United States’ history of systemic racism because they “don’t want white kids to feel bad for being white.” Many conservatives vehemently defend their freedom when it comes to displaying Confederate flags or preventing mask mandates, but they are avid supporters of government regulations and limitations when it prevents the spread of ideas they disagree with.

To these opposers, critical race theory is wrong, even though it encouraged young white people to protest against police brutality so that racist and incompetent policeman are held accountable.

They say CRT is wrong, even though it’s the reason angry people have gotten the government to budge and recognize Juneteenth as a national holiday when what they really wanted were reparations, police reform or defunding, and the conviction of guilty cops.

They say CRT is wrong, even though it led the government to recognize lynching as a federal crime after 120 years of resistance.

But perhaps these people oppose CRT not in spite of these accomplishments, but because of them.

These changes brought by CRT are not enough, but they are still progress. If the worst thing someone can say is that white people feel guilty, maybe guilt is a small price to pay. Today’s generation may not be directly responsible for the creation of systemic racism, but they have a responsibility to help dismantle it. Guilt isn’t punishment for being white; it’s a deterrent of ignorance and a force for change that minorities deserve.

Even if Republicans in Michigan manage to pass the anti-CRT legislation known as House Bill 5097, the constitutionality of it is unclear. In the press release submitted by Rep. Beeler, it was stated that House Bill 5097 would “prohibit the state Board of Education and local school boards from explicitly or implicitly including a set of statements, beliefs or ideas related to race and gender stereotyping in core academic curriculum for public elementary, middle and secondary schools.”

Andrews says that  financially penalizing schools for anti-racist curriculum is “actually a racist move. … It furthers systemic racial oppression in education, disadvantages all children and upholds white supremacist ideals.” She also said it is unclear if these penalizations are constitutional, or “whether they impermissibly restrict free speech.”

Keith Kindred, a social studies teacher at South Lyon Community Schools, says that the bill doesn’t make it clear what it will ban. “It is essentially unenforceable,” he said. “If you look at the language that’s being proposed, it’s so vague that no one would agree on some of what the provisions actually mean.”

The attacks on CRT are coming after the country’s recent political shifts to combat systemic racism. They came after the protests over the murder of George Floyd and the successes of the Black Lives Matter movement. They came after the term “microaggression” became familiar to most people in hopes of discouraging them from making inappropriate comments and touching ethnic people’s hair without permission like they are test subjects.

CRT is the teaching of everything wrong with social dynamics in regards to “race,” a term invented by white people to differentiate themselves from “Blacks” and justify their privilege and dominance over other minorities (not just Black people). Critical race theory is a path to atonement and an explanation of everything that the soon-to-be-formerly dominant population, the ruling population—white people—have done in the name of race. Now, that condemnable history is conveniently being labeled “anti-white” rhetoric that makes white people feel guilty and should not be taught in the classroom.

Maybe that guilt is really a symptom of cognitive dissonance after being exposed to the truth: that society has infected them with lies. That same cognitive dissonance has opposers of CRT convinced that closing their eyes will make the problem go away, so they misdiagnose the problem, reducing it to “misplaced guilt.” They don’t understand that like any illness, things get uncomfortable before they get better. Symptoms let us know that something is wrong and to misdiagnose could be to ignore an infection even more catastrophic—perpetuating the same oppressive social dynamics that made them feel guilty.

Kristian Wayne is a senior studying creative advertising and journalism. He spends his time writing, taking photographs, and working as the head of advertising at MSU Telecaster’s Giraffehouse. He currently interns at WKAR for the social media department. He is a song-writer, copywriter, actor and creator who hopes to practice freelance photography and creative media. Instagram: @waynethevision