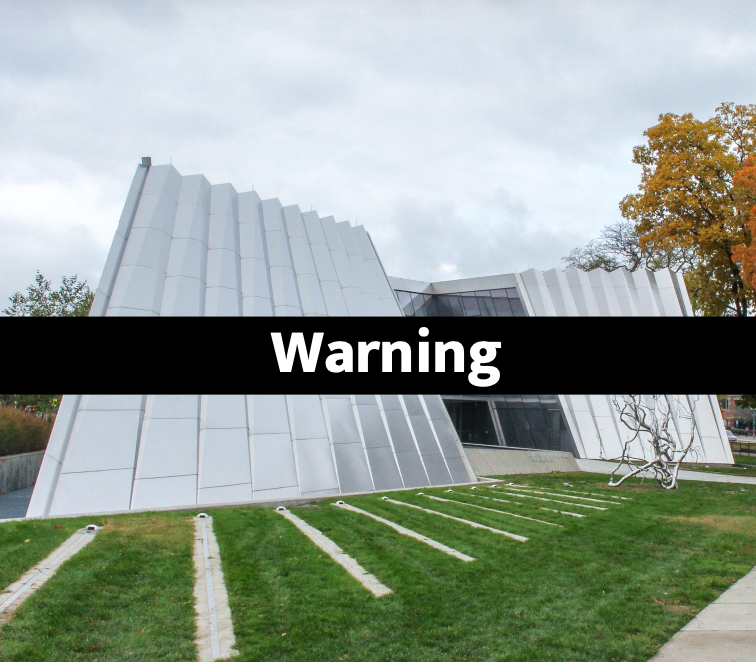 Content and trigger warnings are phenomena that have become more prevalent in society in the last five years. CWs/TWs allow audiences to consume content after being made aware of what it contains so that those who may be sensitive to certain types of content can opt not to consume it. But the use of content and trigger warnings in the artistic world has become a topic of strong debate.

According to the support group The Mix, content warnings are used to note content that might be potentially distressing for some audiences, while trigger warnings note specific pieces of the content that might cause a trauma reaction. There are also warnings for technical inclusions that may cause a medical alert, such as flashing lights or loud noises. Warnings can be found on the individual pieces or at the entry points of the artistic space.

While these warnings appear to be good practice for internet content, they have been controversial when applied to art in most mediums­, like film, studio art and theatre. While some argue that warnings make the art more accessible and allow audiences to prepare themselves, others believe that art should be shocking and surprising to have maximum impact on the consumer. Both sides have complications.

It can be hard to define what content requires a warning. Violence, death, discrimination, combat, consent and sex usually warrant content warnings and trigger warnings if graphically depicted. But in breaking those general categories down, gray areas begin to appear.

For example, the COVID-19 pandemic has been traumatic for many people who have had the virus or lost people to it. Even if the disease didn’t physically affect someone, there could be mental or psychological impact from isolation and quarantine. Art reflecting the pandemic could invoke a trauma response for some consumers, so a content warning could be used. Since there’s a wide range of art that can define itself as reflecting the pandemic, should all pandemic art be given a content warning? It’s up to the artist and/or the venue to decide.

“While I don’t have many personal triggers, I do very much appreciate TW’s/CW’s. No one should have to unexpectedly confront their sensitivities, no matter the context,” artist and art consumer Sean F. Libiran (he/him/his) said. “I do feel like individual warnings per piece can be distracting and also dampen the impact of the piece, which is unfair to both the artist and the consumer. I think a blanket statement at the beginning of a showcase is plenty, to give patrons the chance to decide whether or not they want to continue. That being said, I’d definitely change my tune if someone still had a painful or triggered response in spite of the initial blanket warning.”

In most artistic situations, it makes sense to have the content and/or trigger warnings posted at the entrance or at ticketing. But there is always a possibility that the warnings will be missed or that the venue will not prioritize posting them. It then falls to the individual artists to ensure that proper warnings are given for their content.

At a recent production of “Wendy and the Neckbeards” at Michigan State University, trigger and content warnings were prioritized by the director and Department of Theatre due to the play’s subject matter and language. A large sign was posted at the entrance to the theatre, and the house manager ensured that everyone entering understood the warning. Warnings were also included in the playbill and online. These were appropriate, as misogynistic language and threats of violence were prevalent in the play and could have invoked strong reactions from the audience.

Art consumer Abby Stevens* advocated for venues maintaining a commitment to content warnings: “Personally, I think [the need for warnings] depends on content. If it’s in a gallery or performance space, I think it’s the responsibility of the hosts to assess the art they are hosting and provide warnings at entrance/purchase, and, if possible, physically separate potentially triggering art so someone in the exhibit can enjoy part of it and avoid parts they don’t wish to see. Or people who are unexpectedly triggered can have ways to easily remove themselves from triggering materials and still enjoy the exhibit.”

Segregating potentially harmful materials is a technique employed by many museums and galleries, adding a layer of warning besides notices in programs or at the entrances. But those kinds of warnings are harder to mimic in online formats, shifting responsibility to the artist for creating content warnings for their art.

“I think this involves communication on the part of the artist about what their art is, and in other environments (like online exhibits and portfolios that the artist hosts) it is entirely the responsibility of the artist,” Stevens said. “Art definitely needs content warnings.”

But not everyone agrees that warnings are appropriate. The main argument against giving warnings in artistic settings is that it removes the element of surprise from whatever is being consumed. Many art projects take months or years to create, and the artists involved are invested in making an impact on their audience.

“The best art is often the art that makes one the most shocked and disturbed. It causes one to reevaluate their reality. With the use of CW’s, where is the element of surprise?” said art consumer Andrew Jones*, who maintains that medical warnings should be issued, but not warnings that give away the substance of the artistic content.

Michael Paulsen wrote an article on content warnings in theatre for The New York Times after the Denver Center Theater Company gained national attention for giving their production of “Vietgone” content warnings. The theater has taken a stance on valuing their customer’s mental health while visiting the space, and they have a team craft warnings for every show that needs them. Paulsen interviewed Emily Kent, marketing director for the theatre, who said, “Some people want to have their buttons pushed, and some people do not; this is about empowering the customer to decide what’s right.”

Immersive theatre is a particularly difficult topic in regards to warnings because the nature of the performance is to have the audience embedded in the art. If the art could be potentially triggering or overwhelming for audiences, they have a right to know what they’re getting into. At the same time, immersive theatre productions can be so complex and intricate that it’s hard to capture every single detail in the content warnings.

“The intimacy and unpredictability of immersive theatre requires its practitioners to engage in conversations around consent well beyond basic content and trigger warnings,” Boston-based director Blair Cadden said in an essay on consent in immersive theatre. “After all, in many immersive works, individual audience members witness different scenes from one another and in different sequences. In an event with this many possible permutations, it is insufficient (and maybe even impossible) to preemptively inform participants about every scenario they might encounter.”

Amanda Berg Wilson, who directed a 2017 immersive version of “The Wild Party,” was ambivalent about adding content warnings to her show at first, arguing that the immersive nature of the piece should allow for natural experience.

“I don’t love telegraphing too much about the show,” she said. “I want everything about the piece to be experienced in real time.”

“The Wild Party” has instances of sexual and physical abuse that could be triggering for audiences, especially in an immersive environment. The venue and production company pushed for content warnings to be included in the interest of audience safety and ultimately won Berg over. However, her argument that theater should be experienced in real time is common among other leaders in the industry.

“We have a generation coming of age that expects to be protected from discomfort, and a lot of companies succumb to that,” Susie Medak, managing director of Berkeley Repertory Theatre said. “To me, it’s a frustrating trend—what’s the point of experiencing art if you don’t expect to be surprised?”

“Folks should have a chance to discern if they can safely consume art and ideally have an opportunity to talk with someone who can clarify the reasons for content warnings,” Quill B. (they/them/theirs), an artist and art consumer said. “[Warnings] can be vague to avoid giving away things, but if someone needs to know more for their safety and well-being, they should be able to get that info, regardless of whatever ‘shock value’ the artist wants.” They went on to advocate for audiences of all abilities.

“People say that warnings for things that are just mentally/emotionally distressing aren’t necessary, and while I understand their perspective, it comes from a place of privilege. We live in a society in which people with stigmatized mental illness or disability (especially if they’re also people of color) are often met with violence when in distress.”

Even if the art itself doesn’t do physical harm, “that doesn’t mean creating a distressing scenario won’t carry the risk of physical harm for people involved. Warnings are a necessary first step in making art spaces safe for diverse communities,” Quill B said.

The art world is already in fierce competition to get patrons in the doors. Making those doors as barrier-free as possible is a logical step in generating traffic, and part of keeping art accessible is ensuring that it doesn’t trigger or surprise audiences in a bad way. But whether it is the responsibility of the artist or venue is still unclear.

“I think it depends on what exactly the art is showcasing, but I also think the burden falls on the place showing the art, not the artist,” art consumer Roderick Bullard said. “The artist is sharing their art and perspective on life, and if they are sharing something that is coming from a very vulnerable place, I don’t want to make them name and share that in a gallery setting when the host of the exhibit can handle that.”

But online art is another matter. “I think when it’s shared on social media, that’s a little different,” Bullard said. “There is no one to add that disclaimer for them, and there is a higher likelihood of someone accidentally being triggered by something that they would never intentionally seek out. Some things can slip through filters based on the algorithms of social media, so the artist has to be more involved in limiting the unintended consequences of sharing their art.”

While content and trigger warnings are still far from being commonplace, they benefit the arts community by making all forms of art more accessible. It is true that in some cases they do take the element of surprise away from the art, but they also provide peace of mind to audiences who want to enjoy the art they are patronizing.

C. Rose Widmann (they/them) is a first-year M.A. student in arts & cultural management at Michigan State University and a graduate assistant at The Cube. This is their second semester with The Current; their earlier article “Creating Something Out Of Nothing […]” inspired further interviews on creativity during COVID, produced as a selection for the 2021 CAL CREATE Grants (going live Fall 2021). When not writing grant proposals or playing Planetside 2, C is competing for both the MSU club fencing and club gymnastics teams. IG: @C.rosewidmann