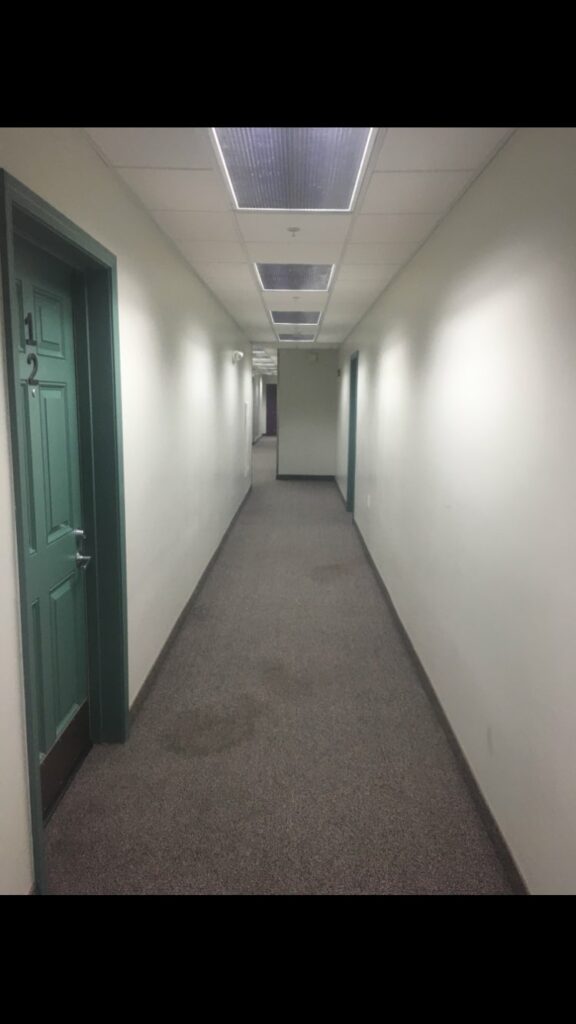 This photo of an arcade in the Lansing Mall may seem like ordinary documentation of a vacant local area with outdated carpet, but to a young subculture on the Internet, it’s a popular addition to “liminal spaces.” Liminal spaces are an ambivalent topic: some believe they evoke a calming aura, a deep sense of loneliness, nostalgia or even endangerment. What is unanimous of liminal spaces is the Latin root word “limen,” meaning “threshold,” which implies a transitional setting where nobody lingers. Fans have tried to define what makes liminal spaces so simultaneously appealing and repulsive, but it seems to boil down to personal interpretation.

For example, outside of the genre of photos and videos on the internet, liminal spaces can be a therapeutic tool. According to liminalspaces.org, their “threshold” may represent tumultuous moments in a person’s life, such as moving or changing jobs. Liminalspace.org appears to take the stance of wanting to approach a liminal space, even encouraging the tactic to its website visitors. Their homepage reads, “We often miss the real potential of ‘in-between’ places – we either stand paralyzed or we flee quickly, anything to avoid the discomfort.”

However, seeking discomfort from liminal spaces is becoming more of the norm among Gen Z, as evidenced by a meme called “The Backrooms.” On May 12th, 2019, an anonymous 4chan user uploaded a photo with the caption “post disquieting images that just feel ‘off.'” Users replied with threads of their own photos, but that main visual gained the most traction. The barren office space depicted is neglected and rotting, and the lighting is an unpleasant greenish-yellow emitting from fluorescent bulbs.

Thanks to gamer culture, the image was associated with “no-clipping,” which disables collision detection and allows players to travel through boundaries while viewing an unusual, somewhat inverted perspective of the map. Instead of confinement to fictional video games, The Backrooms are imagined as a no-clip from reality. “No-clipping reality” and unexpectedly visiting the mysterious location in the photo is frequently stated as “ending up in the backrooms.” The idea is that no one would willingly enter a place that reeks of moldy carpet and has an “endless background noise of fluorescent lights at maximum hum-buzz.”

“The Backrooms” became a creepypasta as familiar as Jeff the Killer and Slenderman. Though a much newer story than the former two, The Backrooms stands out for its hellish effect on a victim, given that it is an omnipresent location separate from reality. Multiple games took advantage of this unique brand of horror, and one particular game called “Backrooms Horror Maze” entered the 4chan photo that started the craze. Besides the creepypasta lore, the abandonment of The Backrooms is sometimes amplified by adding music from The Caretaker’s “Everywhere At The End of Time,” which intends to simulate stages of dementia.

Another popular liminal space category called the “The Pool Rooms” encompasses indoor pools and waterparks and is seen as a “level” in The Backrooms lore. One piece of media representing this metaphorical “level”  is a YouTube upload titled “The Pool Rooms (Found Footage).” Part of a series of realistic animations, the viral video is shot from a first-person perspective and explores a maze of indoor pools, with a cherry on top of yellowish lighting and retro camcorder distortion. The themes of reoccurring dreams and childhood memories discussed in its comment section tend to be the typical discourse under liminal space visuals.

To be more exact, Gen Z has attached the term “dreamcore” to some liminal space visuals, and on the TikTop app alone “#dreamcore” has more than three billion views. In his article on dreamcore and liminal spaces, Zach Terillion, a student journalist at Oberlin College, connected it to a psychological concept known as a schema. He believes schemas influence responses to dreamcore because they take one simplistic object and trigger an onslaught of memories. That aforementioned photo of the arcade in the Lansing Mall may seem uninspiring to locals, but a person without any context may interpret it as much more.

Terillion said, “Do you recall this old arcade? Perhaps it was a friend’s birthday party or a family outing. The imagery present allows space for customization.”

When examining content labeled as “dreamcore”, there is a noticeable pattern. The colors are either desaturated and gray, or unnaturally vibrant. The quality is fuzzy and emulates disposable cameras and camcorders. The locations are all fairly relatable and common, such as playgrounds and grocery store aisles, and almost always are devoid of people.

Because these photos seem to document places nearly any Gen Z-er can remember visiting, they create a strong sense of nostalgia. The emptiness and lack of colors add a somber element and remind audiences that places they experienced are often gone and reduced to “burning memories.” It can also feel disorientating staring at these visuals because the locations were likely stops in a family road trip, malls that have died off, a classmate’s party, or a relative’s basement—in other words, places that didn’t have the safety of home.

When asked how looking at liminal spaces made him feel, Gen Z-er Logan Bry stated that he never experienced any comfort, but understood the nostalgic aspect. Bry said, “Images of old arcades or bowling alleys will occasionally have a sense of familiarity, but the vacancy and vastness of these rooms just gives me a sense of eeriness and unease.”

For Bry, it wasn’t just the emptiness that “made his skin crawl.” He felt these places, such as the indoor pool rooms, would be riddled with germs and filth. It’s possible some of these settings are inherently repulsive before editing and a “dreamcore” label.

Liminal spaces do not have to fit a list of requirements to be impactful. The visuals popularized by Gen Z often thrive off a combo of imagination and a longing for the places only accessible through faint memory. For the typical Gen Zer, who has spent their whole life with immediate access to current events and communication, liminal spaces offer a quick distraction from the world’s pressures. Though they may soothe some, the inexplicable horror of these benign looking images is that they depict childhood happiness as something lonely and actively rotting.