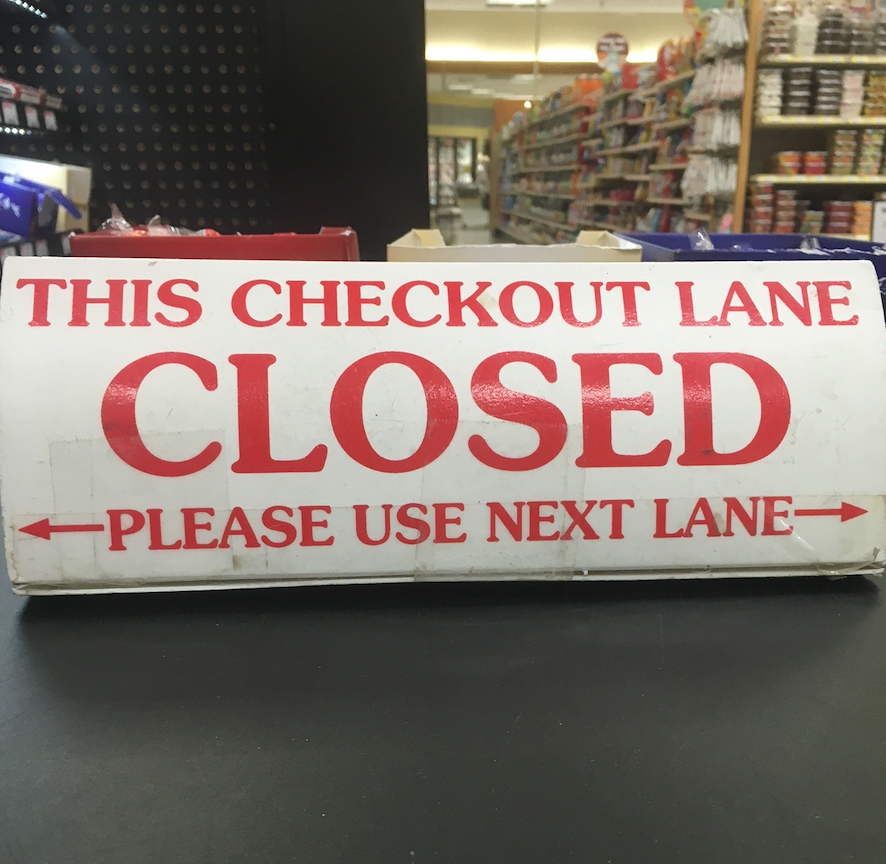 The lingering impact of COVID-19 has highlighted a changing belief that cashiers and baggers are necessary staples of modernizing grocery stores. During the height of the pandemic, browsing the store became a reluctant trip to an unhygienic and overcrowded setting staffed by stressed essential workers, and dependency on self-checkout and self-service increased as customers prioritized safety over socialization. While self-checkout does shorten the time spent at a store, removing the interactive aspect has caused concern about removing something else: the incomes of over 3,424,200 cashiers and 85,973 baggers.

The first instance of self-service replacing jobs held by grocery store employees happened in 1916, when Piggly Wiggly introduced the unfamiliar concept of allowing customers to browse a store and pick out items without help from clerks who usually did it for them. This business model risked the misconception that it normalized worse hospitality, but clerks at other stores were costly, and paying for those workers added to item prices. Although it was initially odd for customers to see employees stocking and refusing to behave like typical clerks, founder Clarence Saunders believed in his idea and filed a patent in 1917. Fortunately for Saunders, it became commonplace to browse in grocery stores with clerks removed from the experience.

Self-checkout machines entered the scene when a Kroger store in Atlanta, Georgia, installed three machines in 1986 and began a 14-week testing period. Data from the store indicated a strong preference for “doing it yourself,” even though there were still five cashier lanes available.

However, a 1987 article in The Oklahoman mentioned that these initial prototypes still involved a bagger and cashier role, explaining that customers would scan, “then place it on a conveyor which carried it to a bagger. The shopper took the bagged groceries, along with any coupons, to a central cashier station and paid for them there.”

Those who push for self-checkout argue that customers should be able to bag their groceries exactly how they prefer. A customer who knows their limitations can also protect the environment by reducing the plastic bags a cautious bagger could waste wanting to “pack light.” However, some grocery stores recognize this waste and have encouraged cashiers to implement 5-cent discounts for every reusable bag a customer brings, as well as bag bans and taxes.

They also say capitalism provides the freedom to choose between humans and automation and promotes efficiency. Indeed, some self-checkouts from competing brands have shown impressive technological advancements. For example, a company called Mashgin developed a “countertop system that uses artificial intelligence to identify and ring up items automatically. [The technology] allows customers to check out in as little as 10 seconds—eight times faster than a regular self-checkout machine.”

Despite these developments, a frustration commonly expressed about self-checkout is its sensitive technology. A survey of 270 U.S. adults stated that “74% said the difficulty in entering goods and frequent overrides were their biggest concerns with the technology.” While a cashier knows the produce codes and can perform tasks like adding quantities and carding purchases, customers have to search through a database to account for a simple bunch of bananas and often wait for assistance if they want to buy alcohol. The easily triggered automated message that warns, “Please remove unknown items in the bagging area,” represents another side effect of self-checkout: frequent shoplifting.

Though some customers may innocently forget an item at the bottom of their cart, others have devised multiple tactics for effective shoplifting, such as swapping barcodes on expensive items and miming scanning before handing the item to a nearby accomplice. Less calculated shoplifters may do it simply out of spiting confusing technology. Shadd Maruna, a criminology professor at the University of Manchester, suggested that shoplifters may do it to defend cashiers’ dwindling jobs. He said, “[Shoplifters may reason that] the corporation has saved so much money by laying off all its cashiers that it is almost morally necessary to steal from them [as punishment].”

Some cashiers remained employed by taking on the new role of overseeing a group of the increasingly popular self-checkout machines. When COVID-19’s impact started appearing everywhere, a Shekel survey in April 2020 stated that “two-thirds of [American]consumers were using self-checkout, touchless self-checkout or frictionless micro-markets to pay for groceries.” Though self-checkout’s popularity can be attributed to it looking like a clever substitution for a potentially infected employee, the cashiers monitoring the customers often had to step in and help. Luz Hernandez, a grocery store employee, said that customers “didn’t get the point of self-checkout” and would take advantage of the nearby employee and make them do the scanning.

Baggers don’t typically monitor self-checkout, but some have found ways to keep their jobs. For example, U.S. Military Commissaries, grocery stores on military installments, consider their baggers to be “self-employed.” The “self-employed” baggers work flexible hours and rely on tips from customers, though some choose self-checkout to avoid feeling obligated to tip for a service they could easily do themselves. Some Meijer locations have even reintroduced baggers to “help decrease time at checkout.”

Even with stores adjusting cashiering and bagging to prevent laying off many employees, statistics suggest that self-checkout has already replaced “140,000 jobs since January 2017.” Some argue that the low wages and demanding hours exploit employees who could choose to work elsewhere, but these non-discriminatory jobs support the livelihoods of many people. Most cashiers are women (over 70 percent) from minority communities and impoverished backgrounds, and many do not have Bachelor’s degrees. Though the decline in customer-facing retail jobs also impacted men, their loss was offset by an increase in warehouse and delivery driver positions.

Choosing a human cashier while walking past a group of self-checkouts doesn’t have to feel like a profound statement. It may simply be a way to acknowledge that someone’s profession is there to enhance the feel of a store. While companies may tell these employees that they are too expensive to keep around, customers can offer a smile and continue fighting against cost cutting that only costs employment and underappreciated service.