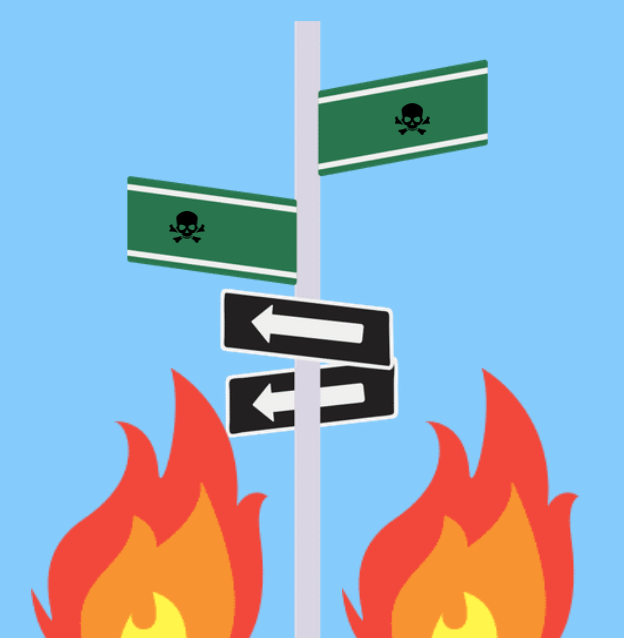 Advice experts will gladly tell someone to take a walk as a form of therapy or exercise, but in some neighborhoods, this action isn’t so relaxing. The year 2021 saw an average of 20 pedestrian deaths per day, the highest in forty years, due to neighborhoods designed to accommodate cars and building codes.

When residents lose priority, they lose walkable neighborhoods that should be, according to author and city planner Jeff Speck, “safe, interesting, comfortable, and useful.”

Speck’s multiple books and TED Talks rely on this “General Theory of Walkability.” His works and Twitter account describe cases where buildings looked too similar, or road design enabled drivers to go beyond the posted speed.

One problem interferes with the visual component of walkability, while the other directly endangers pedestrians and bikers. Either way, they are of equal importance under Speck’s theory.

What may have been the first setback for walkability appeared as an innovative solution for the residents living and working in filthy cities.

During the Industrial Revolution, factories were built close together and near the riverbanks. Their compactness overwhelmed residents with smog pollution and chemical waste, and sewage would flow directly into the water supply.

As people complained about the squalor, British urban planner Ebenezer Howard wrote the book “Garden Cities of To-morrow,” where he proposed that they try to get the best of both worlds by living in the country and working in the city.

Thus, the concept of suburbia was born.

Suburbs, unlike cities, were built on wide roads with curves. Though intersecting gridiron city streets were navigable and effective for walkability, the layouts of suburbs were designed for automobiles.

Some developers believed the rigidness of gridiron streets would interrupt the natural landscape and detract from the supposed “countryside” the suburbs advertised. Cars could also stop at fewer intersections and drive faster on curved roads.

Both of these perks became downsides for the pedestrians battling a lack of crosswalks and unpredictable speeding drivers.

Since the mid-1950s, cul-de-sac neighborhoods have been a staple of suburbia, and they continue to be a secret enemy of walkability.

Cul-de-sacs may boast of empty roads and interaction with neighbors, but they may also cause boredom and worsen traffic as residents head to work. Cul-de-sacs do not provide the interconnectedness of a gridiron street design and require exiting through the same, repetitive path.

Cars from the dead-end private roads then join on what is known as a “collector street,” where the congestion during peak travel can cause accidents.

That’s not to say that cul-de-sacs themselves are free of accidents, though. Cul-de-sacs are a hotspot for accidents involving children getting backed over on driveways. According to kidsandcars.org, “at least fifty American children are backed over by vehicles EVERY WEEK, and 70 percent involve a parent or close relative behind the wheel.”

Cul-de-sacs also limit the societal elements that contribute to a valuable walk. Their disconnectedness does not allow for nearby businesses and communal areas, and their complicated entrances and exits can limit plowing, public transportation and even police patrolling. Though cul-de-sac residents believe the tightness evades criminal activity, they are left vulnerable by the absence of police.

When the Seattle Transit Blog discussed walkable cul-de-sacs, a commenter named “Bruce” claimed there was “an easy fix” for disconnected communities. Bruce said, “All that needs to happen is to lay over a cul-de-sac layout pedestrian/bicycle connections from each dead end to the next street.” He added that a plan like that would promote walking and biking and keep passing traffic away.

Bruce’s description is actually the typical layout of Swedish neighborhoods, as Swedes, according to a reply from Skadlig, “seldom build in squares and almost always have paths for pedestrians.”

Homebuyers who opt for spending money on quieter streets have prompted some to question if walkable neighborhoods are a “luxury.” After all, realtor.com claims a survey “found that buyers [anticipating a safer option] are willing to pay up to 20% more for a home on a cul-de-sac.”

However, Steuteville also mentioned the older homes that make up a portion of these walkable city neighborhoods. As urban planners began focusing their attention on the suburbs, the older neighborhoods in the cities lost priority, and many began decaying. Streets that haven’t been fixed up or modernized usually coincide with underperforming school systems and high-crime rates.

Although those traits contribute to their affordability, this is a major tradeoff. The presence of crime conflicts with the “safe” and “comfortable” walkable characteristics that Jeff Speck stresses. Steuteville’s statistics additionally don’t involve a solution for cul-de-sacs, which seems to falsely suggest that suburbia is exempt from the conversation.

In other cases, it’s not about separating people from the city, or wanting cars to drive faster. It may be short-sighted fire departments that interfere with walkability.

To accommodate their trucks, the San Francisco fire department demanded that “all roads, including residential side streets, be 30 percent wider than the code minimum of 20 feet of street clearance (typically two 10-foot lanes).”

Widening a road strays from Speck’s theory in multiple ways: it can create cement barriers that reduce the visual appeal of a walk, it can stifle commercial activity and the traffic may feel comfortable driving faster and carelessly. Mobility-challenged individuals and children can suffer fatal injuries after failed attempts to cross “freeway-sized” neighborhood roads.

Though completely reconfiguring neighborhood structures seems like a complicated request, it’s not impossible to start small. Walkability may require some sacrifice. For example it was recently proposed in Manhattan, New York that a lane from the West Side Highway be dedicated to bikers.

Manhattan Borough President Mark Levine said, “Installing a protected bike lane on Route 9A would solve both issues by easing congestion on the current path while creating a legal space for cyclists using electric bicycles, many of whom are immigrant, delivery workers who should not be ticketed for trying to work and travel.”

Walkability may also require paying attention to habitual behavior in an area. A desire path is typically a dirt trail made from pedestrians trying to find a shortcut between point A and point B. To some critics, desire paths are disrespectful blemishes on the environment.

But for the pedestrians mourning the loss of an efficient walk, they’re representative of an urban planner placing asphalt without thinking about the people using it.

Though an urban planner may never read this specific article, everybody can acknowledge the components of an adequate walk.

Walking culture highlights the privilege to freely break from routine and enjoy the outdoors. It’s not a privilege for the individuals who are elderly, blind, use a wheelchair or have been prohibited from a driver’s license in countless other forms. Now that cul-de-sacs, housing costs and dangerous roads have limited this demographic for decades, the next few years could try taking a step, or even a walk, forward.