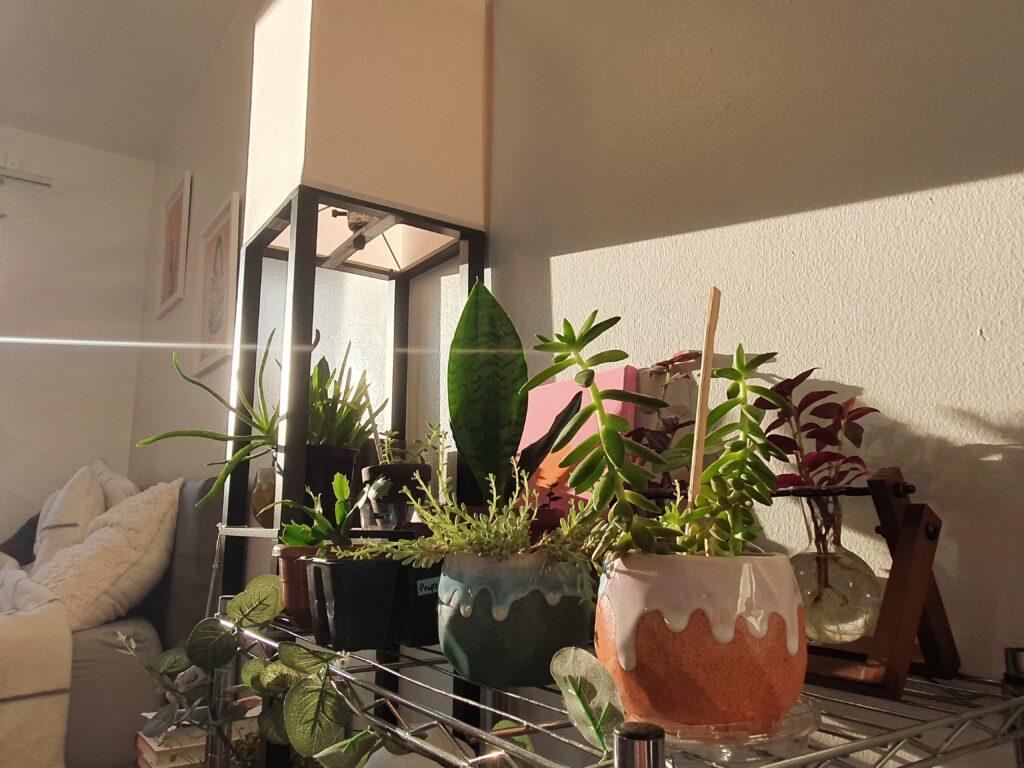 It’s no secret that house pets can improve one’s mood. But according to science, so can houseplants. In an article from the Washington Post, journalist Lala Tanmoy Das found that indoor plants “have a sizable effect on increasing positive emotions and decreasing negative ones.“

In one study from Indoor and Built Environment, participants reported feeling happier and more satisfied after spending just five to ten minutes in a room with a few houseplants. In another study from Sustainability, less than 20 minutes with houseplants was enough to make participants feel more peaceful and positive.

For those who own houseplants, these facts aren’t surprising. “I think that having plants has positively impacted my overall wellbeing,” says Reese Anulwicz, a 3rd-year student at Michigan State University who began collecting plants in 2021. “Just seeing the pop of color and nature in my room helps brighten my feelings, especially because I’m so fond of nature.”

The biophilia hypothesis, popularized in 1984 by American biologist O.E. Wilson, could provide an explanation for this phenomenon. The hypothesis states that humans have a natural fascination and connection with living things, including plants.

This connection with nature means that touching, smelling, or even just seeing plants in a room can instantly improve mental and physical wellbeing, something that Anulewicz has experienced firsthand. “Taking care of plants makes me feel more connected to nature, which is something I care about,” she said.

Especially for those who are stuck in small spaces, such as offices or dorms, having living things to take care of and enjoy can provide an escape.

These days, technology and social media seem to dominate daily life, which can have negative effects on mental and physical health and wellbeing.

As Peter Morrison writes in his article “Me, Myself and I(vy),” Interacting with plants provides a chance to take a break from the screens and enjoy the natural world, bringing happiness and tranquility to an often stressful routine.

Cultivating a plant can also make people feel less lonely. In an age when loneliness is becoming increasingly more common, the act of caring for a plant has been shown to boost self-esteem, optimism, and feelings of control.

For Anulewicz, interacting with plants can be a way to connect with another living thing, something that can bring meaning to people’s  lives. “Taking care of a living thing helps instill a sense of purpose, which is something that also benefits my mental health.”

In addition to boosting positive emotions and reducing feelings of stress, depression, and even loneliness, indoor plants can have a profound impact on physical health.

One study from the Journal of Physiological Anthropology showed that interacting with plants can reduce the body’s fight-or-flight response and decrease blood pressure after just a few minutes.

Another study found that surgery patients with plants in their rooms had significantly quicker recoveries, lower blood pressures, and lower levels of pain, anxiety and fatigue.

Quicker recoveries and better physical health mean that people are able to get back to the things they enjoy, just by instilling a bit of the natural world into their daily lives.

Plants are also good for productivity. When focusing on demanding tasks, such as work or homework, mental fatigue and negative emotions can decrease one’s ability to pay attention.

Studies have found that just seeing a plant can redirect attention and recharge depleted mental and physical energy, which can then contribute to alertness, productivity and positive feelings.

This is one effect of houseplants that can be especially helpful for college students, who are likely to experience stress and mental fatigue. One study from the University of Tennessee, Knoxville found that active interaction with plants, such as gardening, as well as passive interaction, such as being in a room with plants, increased student satisfaction and academic performance.

Because being around plants satisfies the human need for natural connection, people are better able to take care of their own mental and physical health, which means they are able to succeed in their everyday lives.

“It’s hard to ignore the volume of research showing that houseplants have a significantly positive effect,” says the Washington Post. With technology taking up more time and impacting how everyone forms relationships, it is more important than ever to indulge one’s biophiliac tendencies.

Clearly, bringing plants home isn’t just a trendy way to decorate — it’s a way to connect with nature, exploring and experiencing the connections that ultimately give life meaning. When things get overwhelming, plants are a reminder to go back to our roots.

Kara MacKenzie is currently a senior studying Professional & Public Writing and Women’s & Gender Studies. She is interested in the intersections between rhetoric and social justice, and hopes to one day use her communications skills to benefit a nonprofit organization. In her personal life, she is an intramural volleyball player, plant mom, artist, and avid reader.