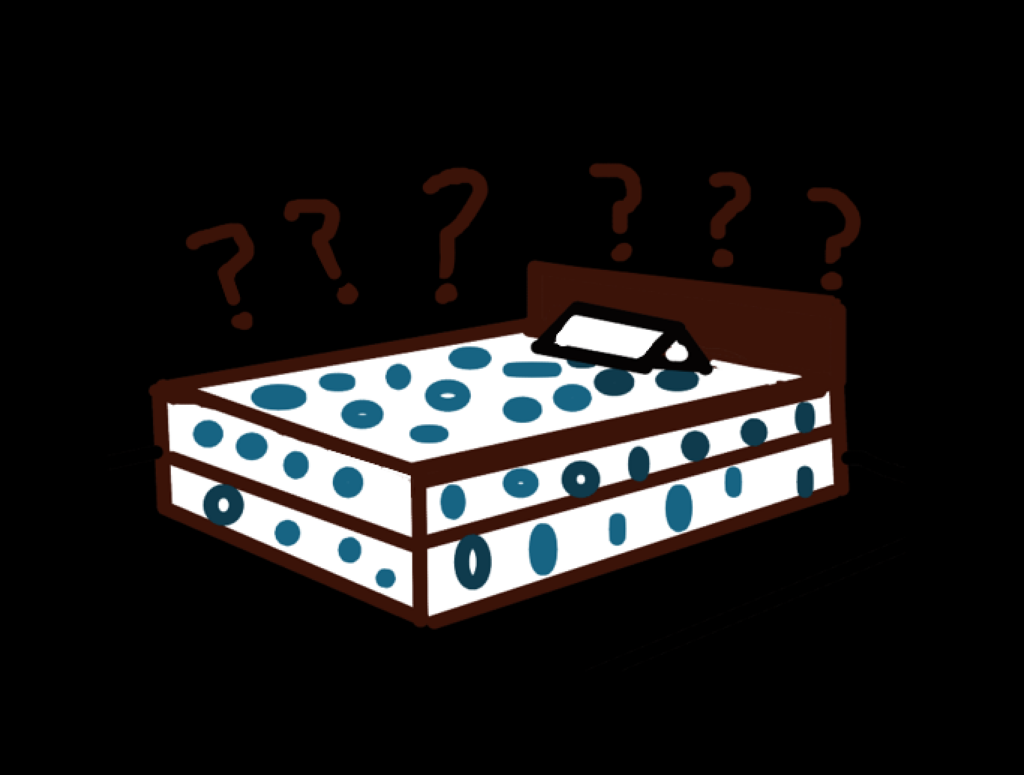 Unlike the peaceful imagery of bedtime slumber, the mattress industry does not seem to prioritize a relaxing experience for its consumers. The act of purchasing one is already vulnerable enough. Consumers may aimlessly decide and risk a healthy sleep schedule or do the opposite and spend hundreds on a list of new features. However, that is only a fraction of the unsettling stories about an industry profiting from a necessary aspect of survival.

First, there is the history behind the tag that seems to warn of a “penalty from the law” if removed.

This tag is not supposed to intimidate a consumer — it’s a warning to manufacturers. In the late 1800s and early 1900s, it was a common occurrence to buy a mattress stuffed with a mysterious combination of random objects and materials. According to mattressclarity.com, this included “horse hair, corn husks, food waste, old rags, newspaper, and whatever else a manufacturer could come by.” The government caught on to these potential biohazards and, in 1913, started requiring a tag that listed the exact contents of the mattress.

Several decades later, the waterbed debuted in 1968. The waterbed had strengths like a therapeutic heater and a water-filled mattress designed to alleviate the pressure points on the spine, but the mattress industry wanted to add another selling point: sex appeal. Advertisements depicted scantily clad women strewn across the beds, seemingly implying that the alluring models and waterbeds came as a set. Even if the pictures were subtle, the slogans, including one that said, “A pretty face, a beautiful water bed –– the rest is easy,” made the sexual connotations blatantly obvious.

The modern-day mattress industry isn’t much of an improvement either. For example, a blogger and other reviewers suffered a lawsuit from the Casper brand.

In his article about these lawsuits, journalist David Zax highlighted that Casper was a highly-valued “750 million dollar company” with celebrity endorsement, so why did it “pick on some skinny blogger from Arizona?” Derek Hales wasn’t just a skinny blogger — he was the founder of a mattress-reviewing website called Sleepopolis, who had “built his site into the number-one Google hit for countless popular queries related to mattresses.” Hale initially uploaded a review praising the mattress, but he eventually changed his opinion and posted an update that included a box with four recommended competitors.

This negative review grew extremely popular and became the first recommended review whenever someone googled “Casper mattress review.” Evidently, Casper noticed Derek Hale and included him in a 2016 lawsuit encompassing his Sleepopolis website and two other reviewers. Casper accused Hale of “false advertising and deceptive business practices,” and lawyers demanded financial compensation for the “millions of dollars of lost sales.” Unfortunately, despite Hale’s claims of censorship, he ultimately lost his website the following year, and the domain changed ownership to none other than a subsidiary financially supported by Casper.

The original review Hale posted is now nothing short of an endorsement for the Casper brand, and the recommendations he added have turned into a coupon box.

The negative press surrounding Casper continued after Hale’s dilemma, this time due to the company digitally “wiretapping” its customers. Casper’s website accomplished the wiretapping by embedding NaviStone, a technology that can “observe keystrokes and mouse clicks” and quickly learn a website visitor’s private information. Brady Cohen, a man who filed a “21-paged lawsuit” against Casper, claimed that he never purchased their mattresses, making the spying even more unreasonable and invasive. Casper responded to these allegations by saying Cohen was trying to extort a successful start-up.

Though an online store, especially one run by Casper, may use shady tactics, buying mattresses in person may not be any more effective. Stores may conjure discounts from prices that would, realistically, never apply to a mattress. An article on vox.com recommended that customers use their smartphones to compare prices at brick-and-mortar stores to the same mattresses online. However, the mattress industry knows the convenience of researching with smartphones, so they still find ways to complicate it.

And finally, the infamous money laundering conspiracy attached to the prevalence of Mattress Firms. In an interview published by NPR, podcaster Dan Bobkoff said that there were “3,300 Mattress Firms, [making them] about a third of the 10,000 mattress stores in this country.” This growth started in 2014, when the company wanted to be the best in the industry. In doing so, Mattress Firm bought out its competitors’ stores, racked up debt, and hardly paid attention to the distance between locations.

Coincidentally, the online mattress stores started “disrupting the industry” around the same time. This shift magnified the excess Mattress Firms, and the company had allegedly purchased expensive real estate. Then, in 2016, a South African retail giant called Steinhoff bought Mattress Firm for 3.8 billion dollars — more than double the company’s value at the time. Steinhoff had been investigated for financial fraud, but few seemed to make that connection when it purchased Mattress Firm.

Those that doubt the money laundering conspiracy insist that the Mattress Firm locations only need to sell a few mattresses per month to make rent, and those sales are typically during the weekend. NPR host Stacey Vanek Smith attempted to reach Mattress Firm for a comment, and they pleaded ignorance to any of Steinhoff’s suspicious conduct. Then, they finished by saying, “I can tell you with certainty that Mattress Firm is not a money-laundering front. We are, however, obsessed with finding customers the best bed at the best value.”

Of course, the importance of sleep makes the mattress industry extremely difficult to boycott and hold accountable for its actions. For now, consumers can look at its questionable history and recognize the signs of getting scammed again. Though some may mourn a shopping experience that is fun and simplistic, standing up to the big guys is not a cause worth “sleeping on.”