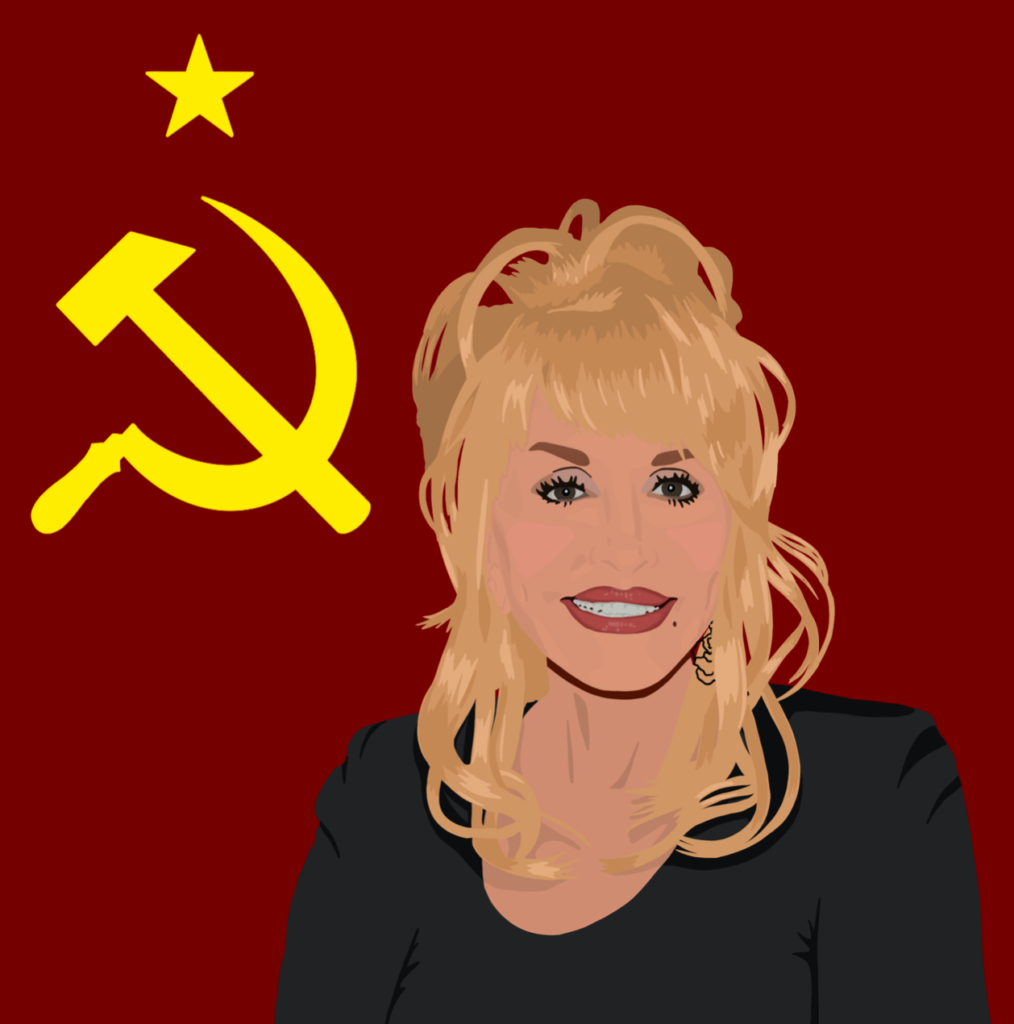 Dolly Parton’s 51-studio album catalog contains multitudes—on one end is “9 to 5,” an anti-capitalist radio staple, and on another is her 2003 album “For God and Country,” which is more patriotic than a Fox Sports halftime show. Despite attempts from many to get Parton to pick a side, the internationally adored country star refuses political alignment at all costs.

Her apolitical reputation is, of course, by design. The Dolly Parton you’re looking for is the one you’re gonna get, and that’s exactly how the Tennessee treasure wants it. Fortunately, this provides an opportunity to read her discography through the Marxist lens, to sift through her work for communist clues and radical ideologies. This may sound preposterous, but it’s actually the one and only correct way to interpret Parton’s music. I swear!

“Trio” was a decade-long culmination of creative flirting, aborted attempts and the potential to redefine the word “supergroup.” But what’s more impressive: Dolly Parton, Emmylou Harris and Linda Ronstadt actually seizing that potential, or the three doing this despite obstruction efforts from three major record labels? A more accurate title for this collab album would be “Trifecta.”

This dream team had two goals here—first, they’re going to break your heart. Then, with veteran country purism, throw it back Old West-style so your sorrows are backdropped by tumbleweed. The lead single, a cover of The Teddy Bears’ “To Know Him Is to Love Him,” bests the original 1958 recording through palpable predestination.

But the finest display of heartbreak on “Trio” is “Telling Me Lies,” where Parton and Harris batten the hatches as Ronstadt nosedives into the dark abyss of psychological entrapment. This comes right after “Wildflower,” a Parton-penned bouquet of roses to misfits, nomads and rebels alike, making for a transition comparable to a hug from grandma followed by her pushing you down a well.

The lone political commentary on “Trio” is “Hobo’s Meditation,” which asks, “Will they have respect for the hobo / In the land that lies up there.” While this makes for a harrowing and meaningful reflection of who gets to be a part of humanity, it is not where “Trio” draws its radical weight from. Rather, it’s both the album’s mere existence—even Warner Bros. was unable to stop its release—as well as its ongoing commercial success, once again proving that artists know better than record label execs. At least, Parton, Ronstadt and Harris certainly do.

“Here You Come Again” is like a cooler-sister album to the blockbuster “9 to 5 and Odd Jobs.” Where “9 to 5” is the disgruntled employee’s rally cry, “Here You Come Again” is let-your-hair-down liberation music. No, the latter does not have a communist anthem, but it does have “As Soon as I Touched Him,” a song about experiencing your first orgasm. Make no mistake: both of those feats require equal amounts of radicalist courage.

“Here You Come Again” is curated like a whimsical bag of party favors. Of course, there’s the obligatory country-gospel track, “God’s Coloring Book,” but there’s also an opening suite of three tracks that swell and glisten and yearn until we find ourselves in a 50s ballroom. Parton finds additional real estate for a ragtime ditty of back porch lovebirds in “Lovin’ You,” and on “Me and Little Andy,” she exercises a literal baby voice. Surely Parton employing similar techniques to that of Playboi Carti puts the album in far left-field territory.

Album standout “Two Doors Down” is the gentlest song in all of pop music that tells its listener to get out of the house and go get laid. And what a radical message that is in these trying times! But seriously, there’s no desire for a revolution without immense dissatisfaction with the status quo. That can be a heavy thing to carry around. “Here You Come Again” is a crucial reminder that there’s always something to dance about.

“In The Good Old Days (When Times Were Bad)” resides in a subtly dystopian suburb, a world that Parton fills with snooty parents and snootier teachers (“Harper Valley PTA”), wives busting their rears to bring home the bacon and husbands content just to sit on theirs (“Go Getter”). But no matter who or where, Parton finds black mold growing under every soul and square foot in this small town. Fortunately, the Parton we get on “Good Old Days” is something of a social vigilante, ripping through the moral decadence in her community without mercy.

But, it’s not all indictments and judgement—in fact, quite the opposite: “The Carroll County Accident” is a story of sparing an indecent man’s sterling reputation. It might be a mini-diorama of the entertainment industry, too. The song’s titular car crash kills a well-respected man in the community, leaving the lone survivor to cover up the affair they were engaged in during the accident. Parton sings from the perspective of the only person who knows the truth, but the town wastes no time in erecting a statue of their dearly departed, and she keeps her mouth shut.

What if the dead guy is John Lennon? Or Walt Disney? Surely, there’s no shortage of male entertainers regarded as auteurs despite their hushed scandals and bigotry. That’d be an astute observation of the entertainment industry for anyone to make in 1969, let alone 23-year-old Parton with just two years of experience in the biz. Totally rad.

On “9 to 5,” Parton’s second-biggest song, she warns of the racket that is the corporate American: “it’ll drive you crazy if you let it.” On “9 to 5 and Odd Jobs,” the album that saw Parton truly nail her country-pop crossover, she let it drive her crazy—crazy enough to record her most outspoken and socially-conscious album to date. “9 to 5 and Odd Jobs” is 10 songs and 36 minutes of Parton blacking out while the spirit of Karl Marx possesses her.

No, Parton was probably not flipping through her copy of “The Communist Manifesto” in between takes with Jane Fonda and Lily Tomlin. Unless Fonda brought her copy, it’s much more likely the text that inspired “9 to 5 and Odd Jobs” was the screenplay for the “9 to 5” movie itself.

The album’s title track was birthed on the film’s set, after Parton discovered this neat sound her nails could make. But it doesn’t really matter where Parton got the idea to record an album so thoroughly radical, because Parton’s disco-fever take on the folk classic “House of the Rising Sun” is just as revolutionary as your favorite political theory book.

There’s just one dip in the radical onslaught of “9 to 5 and Odd Jobs,” and that’s “Detroit City.” It’s a song that begins with Parton falling asleep in our beloved Michigan metropolis and ends with her repeating “I wanna go home” for six measures. But, sandwiched between “Working Girl” and “But You Know I Love You”—songs about the appreciation sex workers deserve and love barred by capitalism, respectively—its an offense this Michigander can forgive.

“My Tennessee Mountain Home” is the first album Dolly Parton wrote completely solo. She begins it by reading aloud the purported first letter she wrote to her family back home after leaving for Nashville in 1964. It’s an unabashedly corny display of on-the-nose sentimentalism, and that’s not the album’s only instance of such. But to knock “My Tennessee Mountain Home” for Parton’s elementary approach is to miss the point of the album entirely.

Really, it’s not an album—it’s a nursery rhyme. Like any good work of Mother Goose, Parton articulates the fundamentals of life in the simplest words she can, only upping the ante in the complexity of topics a bit. Instead of what the wheels on the bus do, “I Remember” explains what a parent should be. “Old Black Kettle” is a fingerpainting about materialism. “Wrong Direction Home” is a crash course on the dangers of nostalgia for kindergarteners.

It’s Parton, however, who’s most in need of that lesson. Apparently, along with bona fide country star success, 1971’s “Coat of Many Colors” brought her a serious case of homesickness. Go figure. Parton responded by trying to bring her home into the recording studio. This entailed lazy Sunday basslines, solemn church organs and all kinds of strings: fiddles, banjos, dobros, harps—you name it.

But ultimately, this wholesome soundscape just goes to further accentuate the bleak observations of poverty Parton makes with unrelenting innocence. “Though he seldom got a dime for all he’s done…I don’t recall a time he didn’t come,” she sings on “Dr. Robert F Thomas,” a tribute to the man who delivered baby Dolly. Every portion of praise she heaps onto the track emphasizes the fact that her community’s health relied on the medical volunteerism of one man.

No album says “Dolly” more than “My Tennessee Mountain Home”—not her 1975 album “Dolly,” or even 1980’s “Dolly, Dolly, Dolly.” It might not tackle hot-button issues head-on like “9 to 5 and Odd Jobs”—it’s so warm and fuzzy, it wouldn’t dream of tackling anything—but it is a radical display of kindness, community and simplicity. If there’s one thing Dolly Parton was put on this planet to do, it’s just that. She’ll leave you convinced life can be “as peaceful as a baby’s sigh.”