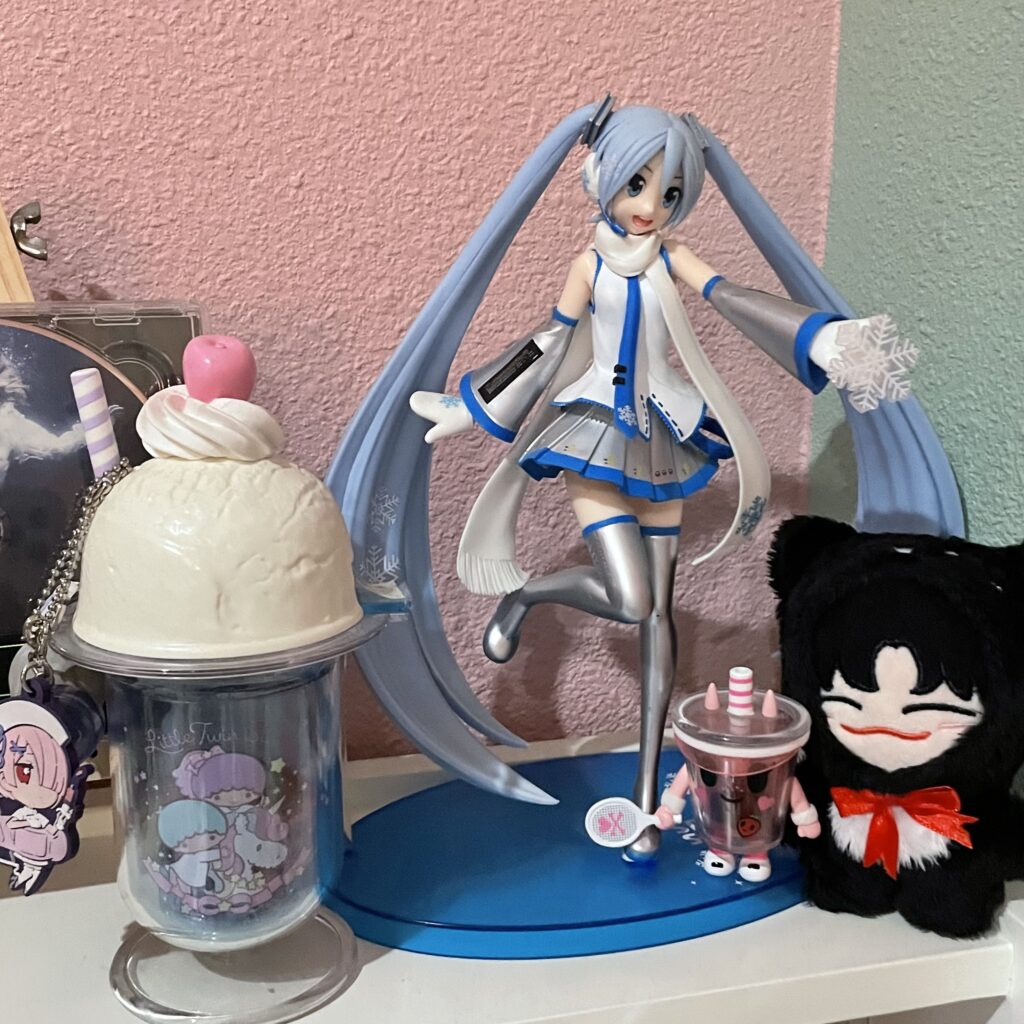 An idol who never needs rest, who can perform indefinitely, and who can be in more than one place at once seems like any music industry mogul’s dream. It also sounds straight out of a “Black Mirror” episode. And surprisingly, it’s a reality. Vocaloids are certainly not new, but they have only recently risen into the public consciousness.

The University of Rhode Island Graduate School of Library and Information Studies published a look into vocaloids, specifically Hatsune Miku. In it, they describe vocaloids as, “a piece of voice synthesizing software that takes sounds made by a base human voice and puts them together to form words; or in this case taking words and assembling them to a musical rhythm to form a song. While the Vocaloids are software, they’re given a manga/anime style avatar to serve as a sort of ‘face’ for the voice.”

In a sense, vocaloids are not too different from virtual assistants like Apple’s Siri or Amazon’s Alexa. However, Siri, Alexa and other virtual assistants like them are faceless, and their names differentiate them only slightly from that robotic voice on the CATA bus or the elevator. Vocaloids, on the other hand, are bonafide celebrities. They have faces and personalities, making them extremely marketable—and marketed, they are.

Vocaloid software is easily obtainable to the average person, and fans are encouraged to download the software and create their own music with it. But these digital pop stars are still owned by companies, so while fan creations are abundant, vocaloids are monetized in an official capacity.

Take for example Hatsune Miku, indisputably the most popular vocaloid and possibly the biggest reason for the hype surrounding her and her virtual companions. Miku has two long bright-turquoise pigtails, and she is most commonly depicted in a gray, white and turquoise outfit that vaguely resembles some sort of uniform. Her hair in particular makes her extremely recognizable, which only makes her a better avatar to advertise with.

In 2019, Miku’s creator, Hiroyuki Itoh, told JRock News, “Hatsune Miku doesn’t exist as a real person, but the advantage to this is that she exists all over the internet instead, everyone can be connected to her through this medium. Not only does it mean she’s available worldwide, [but] anyone can participate and create something with Hatsune Miku. This, in turn, sparks the creation of communities with Hatsune Miku as a common link.” Perhaps this is what explains part of Miku’s insane popularity: the ability to take one’s love for a character and infuse their own creativity into it.

Miku was created by Crypton Future Media and released in 2007 as the first character in their “Character Vocal Series,” which was eventually expanded to include other characters such as yellow-haired twins Rin and Len Kagamine and the pink-haired Megurine Luka. These characters, particularly Miku, were welcomed into the Internet’s consciousness, and by 2013, Miku had been given a complete English vocal library as Crypton sought to expand her fanbase even further.

Expand, they have. In 2014, Miku performed on The Late Show with David Letterman, making her the first vocaloid to ever receive a platform on a mainstream American show. Since then, Miku has gone on to feature in commercials, shows and songs, be they by fellow vocaloids or Western pop stars. In 2020, American singer Ashnikko rose to prominence on TikTok and  featured Miku in her song “Daisy 2.0.” Miku has also had a number of tours outside of Asia, including Europe and North America, where her vocal software is used and her likeness is projected onto glass screens.

Japan isn’t the first country to play with the idea of virtual celebrities, though the ones created there seem to have found massive mainstream success compared to other examples. Funnily enough, Ross Bagdasarian is attributed with first using the concept of a virtual band in 1958 when he sped up recordings of his voice to achieve the high pitched singing voice used by Alvin and the Chipmunks. He went on to produce several award-winning records featuring the anthropomorphic woodland animals. Alvin and the Chipmunks haven’t gone on world tours, though.

Perhaps the only comparable example is the British virtual band Gorillaz, created by musician Damon Albarn and artist Jamie Hewlett. Created in 1998, Gorillaz popularized the term “virtual band.” Since its inception, Gorillaz has consisted of four distinct characters, each with their own name, face and personality. As time has gone by, the characters have aged (and the art style has changed too), giving them a strong sense of life.

Unlike vocaloids, Gorillaz relied heavily on Albarn’s own musical talent and collaborations with other artists to make music, while Hewlett was the mastermind behind the art used for music videos and promotional materials. The characters have their own distinct manner of speaking and inflection when voice acted, and Albarn has always provided the singing voice for lead singer 2-D.

Like Miku, Gorillaz have also participated in virtual tours, though they have not gone as smoothly as Miku’s. The musicians of Gorillaz are very much human, and when Gorillaz went on their first tour in 2001, they chose to blend virtual and live elements by having the musicians play behind a massive screen that displayed visuals to the crowd. Later, both Albarn and Hewlett admitted to being frustrated by the setup as well as acknowledging that attempting a virtual-live tour in 2001 was a bit ahead of its time. Since then, Gorillaz tours have put the emphasis on the live musicians, waiving the virtual aspect in that regard.

The Western population got a taste of the vocaloid craze via the “Black Mirror” episode “Rachel, Jack and Ashley Too.” In it, Miley Cyrus plays Ashley O, a pop star whose entire brain is downloaded into a robotic doll named Ashley Too. Over the course of the episode, the twisted plan of Ashley O’s manager is revealed, which involves using Ashley O’s brain scans and some advanced technology to replace the human Ashley O with a hologram version.

The allure of a hologram Ashley O, the show explains, is that all the inconveniences that come with a sentient human celebrity are gone. As the manager sees it, a hologram can’t disagree with creative decisions, have its own ambitions, or get sick—or even tired. Gone are the days of giving celebrities time off to rest or recuperate their mental health. Not only would they have complete control over a hologram, they wouldn’t have to deal with their pesky human-ness.

“Black Mirror” is designed to show the dark sides of technology, and some have even joked that the lack of new episodes in recent years is due to the fact that, by some accounts, people feel like they’re living in a “Black Mirror” episode. While that isn’t necessarily true, it’s easy to see why some might think that because, with the real-life vocaloid craze happening around the time of the “Ashley Too” episode, it seems like the lines between speculative fiction and real life are getting blurred.

In a somewhat tragic way, the experiences of Gorillaz and Hatsune Miku have almost lent credibility to the ideas presented in “Black Mirror.” They’ve demonstrated the difficulties of having a celebrated virtual band that relies heavily on very real people and illustrated why vocaloids seem to do it better. “Black Mirror” dives into the idea that holograms are more profitable than people, which is a bit darker than the reality of vocaloids now.

Being entirely computer generated, Miku doesn’t have to worry about paying tribute to the people making her music, and there are no worries of balancing real musicians while also giving a platform to the virtual aspect. Plus, the capabilities of a virtual celebrity far surpass those of a human celebrity. If making money is the goal, it’s easy to see how corporations would be tempted by the former. Even video games have cashed in on the hype, with Fortnite hosting virtual concerts and Riot Games creating various virtual bands using League of Legends characters.

Vocaloids do serve as a bit of a threat to real musicians, but it’s difficult to know if they could ever truly replace live musicians. Vocaloids can do things that humans simply cannot, but there are also things humans can do that can’t be replicated by a hologram. Hatsune Miku’s creator has expressed his own thoughts about the benefits of vocaloids being accessible to everyone, but there’s a certain charm that comes with a slightly out-of-reach celebrity. It’s classic fan culture, after all. Humans have been losing their minds over famous people for decades.

It’s clear that these creatives know the value of a human face. Riot Games has had the artists behind the League of Legend virtual bands perform live on multiple occasions, managing to showcase both the live and virtual members of the groups. The creators of Gorillaz have taken a step back from the virtual aspect of their band and have opted for live musicians whenever possible. While these examples aren’t vocaloids, they still showcase the intuitive preference  for the artists who are able to breathe.

Right now, though, vocaloids haven’t quite gone mainstream. They have major potential, so the odds of seeing more virtual celebrities in the future are rather high. But it’s all a matter of preference, and consumer dollars always drive companies.

Are vocaloids truly the future? Only time will tell..

Julita Fenneuff is a senior majoring in Professional and Public Writing with a minor in Spanish. She has a deep interest in pop culture and wants to make a change with her writing. In her spare time she enjoys reading, playing video games and spending time with her pet bunny.