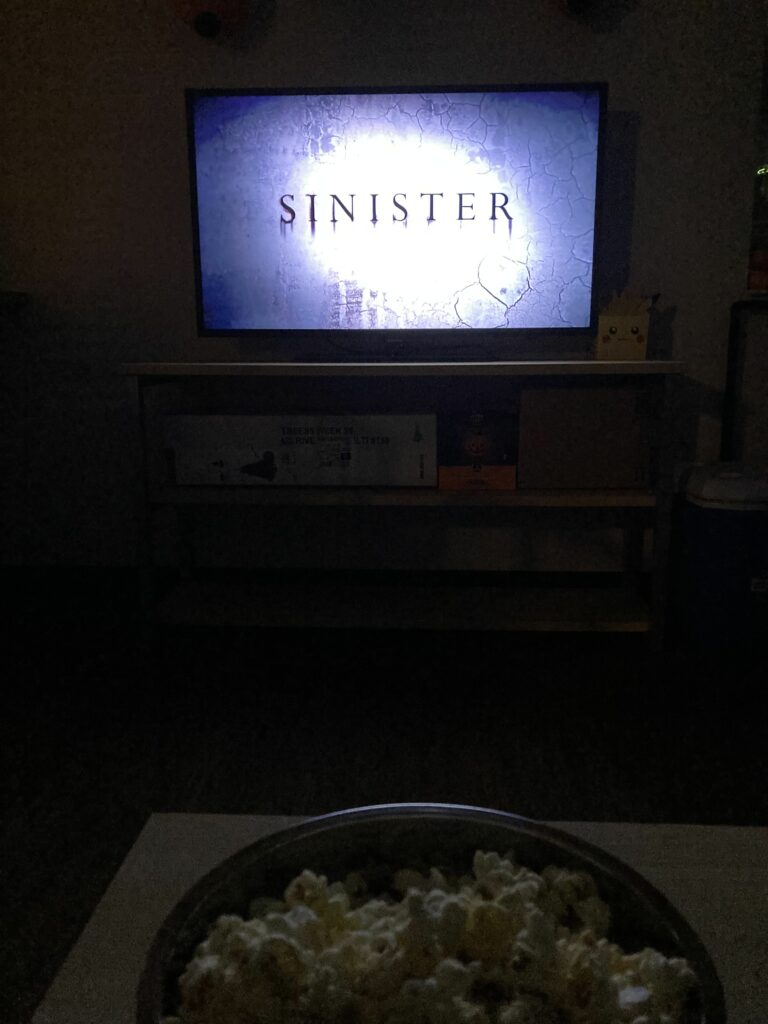 Amidst trick-or-treating, haunted houses and pumpkin picking, another tradition is getting cozy with friends and family to watch horror. In a previous article written for The Current by C. Widmann, “The world’s getting scary out there, so why is everyone watching horror movies?” watching horror movies is linked to the idea of ‘morbid curiosity’, or “the internal motivation to learn about threatening situations in your environment.”

For all of the Halloween enthusiasts with a high morbid curiosity, watching horror movies keeps you on the edge of your seat with jump scares, gore and some of your favorite paranormal characters.

One movie to consider watching leading up to Halloween is “Sinister,” a 2012 film directed by Scott Derrickson and starring Ethan Hawke, Juliet Rylance, Clare Foley and Michael Hall D’Addario. With an “R” rating, this movie didn’t hold back on the use of gore, murder scenes and jump scares.

“Sinister” encapsulates the story of a family led to a new town by true-crime writer Ellison Oswalt (played by Ethan Hawke) and his chase for a new and exciting story.

The family settles into a house with a gruesome history; all but one member of the previous family were found murdered, and the last determined to be missing. Once moved in, the Oswalt family begins to experience strange and downright terrifying phenomena, including nightmares and disturbing paintings produced by the two children, Ashley and Trevor (played by Clare Foley and Michael Hall D’Addario, respectively).

Ellison comes across a box full of old movie tapes that each depict the murder of multiple different families. As he gets more and more obsessed with watching and analyzing these films, more skeletons in the metaphorical closet start to show themselves and Ellison begins to wonder whether or not his book is worth the lives of him and his family.

The expected outcome of a horror film is for the audience to be scared or startled by the end of it, and this movie definitely delivered. The director begins the movie with a slow start by introducing a normal family moving into a not-so-normal house.

With more gradual beginnings like this, there might be an expectation that it would be unexciting or hard to get into, but in this case, a seed of curiosity is planted. This is because of the small hints in the conversations Ellison has with his wife and the sheriff at the beginning that are supposed to tell the audience that some of the characters are already expecting something bad to happen.

Somehow, this gives the feeling of familiarity or connection between the characters and the audience. It almost resonates the same as the beginning of a Scooby-Doo episode, where the gang is introduced to a new character who gives background information to a mystery that they’re experiencing.

By creating this feeling of previous knowledge, the movie builds on itself with layers and layers of suspense, a tactic that should be appreciated in horror films.

Our main character finding the tapes in the attic pushed the storyline into motion. The mystery of these tapes and how it fits into the murders of many families formed the growing obsession in Ellison. He is already an obsessive person, evidenced by his drive to uproot and move his family from house to house in order to upkeep his writing career, as well as the fact that he went as far as to buy the house where these murders took place.

Something about the almost manic obsession that Ellison develops as he spends more time with the tapes gives off the impression that he’s going to become an evil character, which is something that one might expect from the get-go. This type of progression has been done before in characters in multiple horror films such as “Insidious: Chapter Two” and in “The Shining.”

What makes “Sinister” so different from the others, however, is that the main character regains his sanity whereas other similar characters let themselves get weighed down by this obsession, which in turn leads to an unhappy ending for them.

Another psychological thriller, “The Shining,” features a writer named Jack and his family who move into a hotel as its caretakers for the winter. Similar to Ellison, Jack displays obsessive tendencies with the help of a demonic presence that ends up striking fear into his family.

These similarities are only a few of the many that connect “Sinister” to others in its genre, but these trends are popular amongst viewers.

Psychology Today says that, “Psychological thrillers explore their characters’ innermost thoughts and motivations, allowing us to examine how their decisions propel the plot forward into the extremes of human ethics and morality. The genre prompts us to consider the darkness in others and ourselves.” Our characters in “Sinister” especially show us how decisions and motivations can drive a plot to its final destination.

I won’t spoil the ending, but what can be disclosed is that because of this entirely unexpected twist, I couldn’t help but to scream at the characters as if my words could get to them. I questioned every plot point that led up to this final scene and immediately went to turn on the sequel, just to see what happens next.

This film leaves the audience wanting more and keeps them questioning and following intently along with the mystery as it unfolds on screen. The graphic displays of death, the jumpscares and the constant twists and turns kept me on my toes and absolutely terrified.

The final question to ask now is, would “Sinister,” be worth watching? I would say absolutely. You are introduced to a loving family and are made to watch as a simple box of tapes completely turns their lives upside down. But I implore you to go and take a look for yourself, and see what you make of this scary movie.