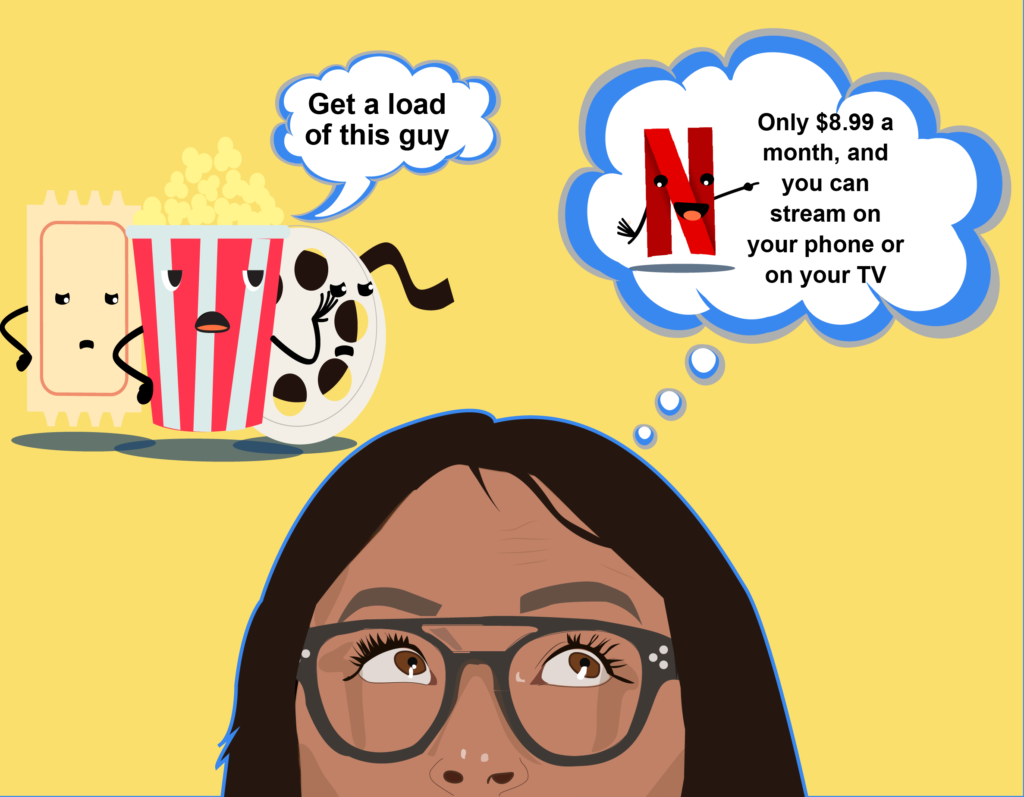 Now more than ever, streaming services have become a popular form of entertainment. The convenience of watching movies and television shows right from your own couch has never been easier. Services like Netflix, Hulu and Disney+ are among the most popular platforms people watch their favorite shows and movies. The simplicity of streaming, coupled with the continued shutdown of movie theaters across the country due to the COVID-19 pandemic, has led to a struggle that many theaters may not recover from.

Netflix was created in 1997 as a way to send DVD rentals to subscribers. It wasn’t until 2007 that they offered streaming, which allowed customers to watch movies from their own devices. Since then, Netflix has undoubtedly become the largest streaming platform, with 183 million members worldwide. Easy access to endless movies, television shows and documentaries, as well as the continual adding of new things to watch each month is a large part of what makes Netflix popular.

Hulu and Disney+ are two other popular online streaming services. Hulu is owned by Comcast and the Walt Disney Company. Hulu was founded in 2007 and provides service in the United States and Japan, with plans on extending into other parts of the world. Disney+, while relatively new, is quickly gaining popularity for having content from Disney, Pixar, Marvel, Star Wars and National Geographic. These platforms are currently being sold in a bundle with ESPN+ for $12.99 a month. Another package with Verizon offers a year of Disney+ free for a year when you upgrade to an unlimited plan. Deals such as this one allow customers to purchase multiple services for a low cost and are especially appealing to consumers who can download and stream from wherever they are on up to four devices.

On the other hand, going to the movies has always been a favorite pastime for many. From attending midnight premieres, hanging out with friends and family or just going for entertainment, movie night has been a staple in many people’s lives. However, when the coronavirus pandemic hit on a global scale, movie  theaters and other businesses deemed “non-essential” were forced to temporarily close. This shutdown led to record highs of streaming, with  Netflix earning around 16 million new customers over the quarantine period, as people in quarantine sought ways to entertain themselves during lockdown. AMC Theaters, a popular theater chain, has expressed their doubts regarding their ability to financially survive the shutdown. CNBC reports that AMC estimates they lost between $2.1 billion to $2.4 billion, coupled with a 22% drop in revenue compared to last year.

In an effort to combat permanent shutdowns of theaters across the country, AMC announced that most theaters will reopen on July 30 with features such as reduced capacity, new cleaning procedures, enforced social distancing and limited food services. Employees will get their temperatures taken before each shift, must wear a mask and will be required to wash their hands regularly. Currently, there are no definite dates for when these select theaters will reopen and it is unclear as to which locations will be among those reopening. The theaters must comply with regulations set by the federal, state and local governments and are likely subject to change. The best case scenario is that these locations can help recover revenue without sacrificing the health of customers and employees.

In addition to streaming, another feature that could potentially hurt the theater business is film studios sending films straight to On Demand before their original release date. A filmed version of the wildly popular Broadway show Hamilton was set to be released in theaters in October 2021. Instead, a theater release was bypassed for a direct release to Disney+ on July 3, 2020, a year and a half earlier than the set premiere. Other studios are following suit, with upcoming movies such as The SpongeBob Movie: Sponge on the Run, Greyhound, Artemis Fowl and more all skipping theatre releases and instead going straight to On Demand or streaming platforms. This new trend will result in further damage to theater revenue, as more movies will likely forgo premieres and instead become available for immediate streaming.

In a society where people enjoy fast and on-demand entertainment, is it any wonder that Netflix and other streaming services are slowly putting movie theaters at risk of shutting down? Being able to access shows and movies in the comfort and safety of your own home will likely be the downfall of many movie theaters in the future. As long as people continue paying for these services, film studios will continue to release media to streaming platforms in order to reach as many viewers as possible. When movie theaters eventually reopen, it will be up to the public whether or not the shows will go on.