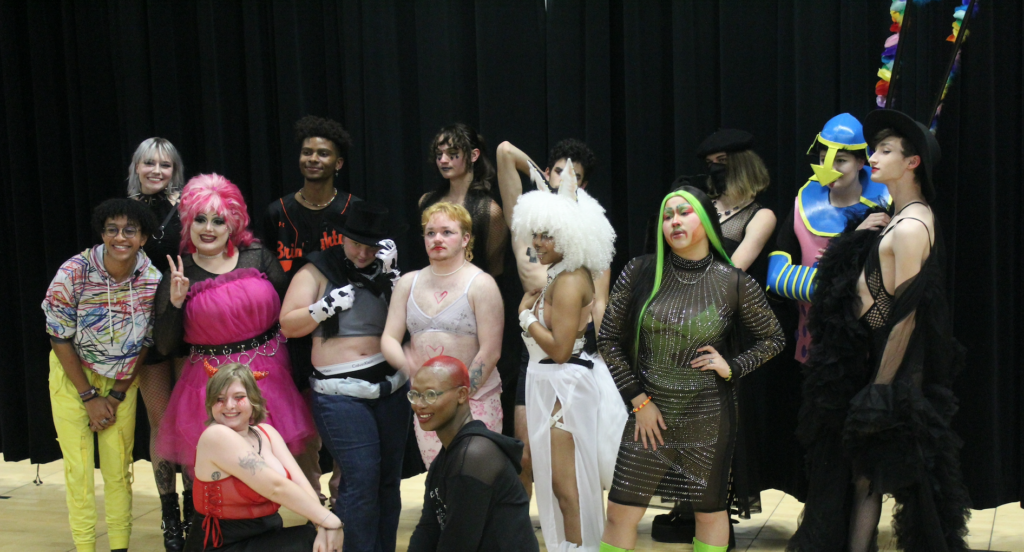 HOUS MSU, a ballroom and drag organization here at Michigan State, recently hosted The Unity Ball on October 21st. This was not the first drag and ballroom event that has been hosted on campus thanks to the organization’s efforts from previous years.

In an interview with Impact 89FM, directed by Katarina Keely, three members of HOUS introduced their club to the East Lansing area, where the president and founder Essex Brooks stated that they wanted  “HOUS to feel like a safe space for everyone. I want people to feel like they can come to HOUS things and be themselves, and be comfortable.”

Aiden Tomkinson, who was both present in the interview and as MC at the ball, took the time to comment further, explaining that “in fall 2021, MSU HOUS put on its first drag show…it’s so great to see so many people come together for this shared interest.” They also attributed Brooks with a lot of credit for coming up with the theme of Unity for the 2022 event.

Prior to the event, HOUS MSU’s Instagram posted its own content warning—concerning loud music, bright lights, adult language and humor, as well as nudity. Underneath, it went a step further, stating that the “environment of the Unity Ball may be overwhelming for some spectators,” and is meant for those who are 18+.

The post gave their enthusiastic followers a good idea of what they were getting into—a promise for things to come rather than a proper warning. HOUS definitely delivered on its promise, and embodied their organization name through encouraging Honesty, Opulence, Uniqueness and Strength in every performance.

There were two main types of performances happening at the event: the first being professional/polished drag. Performers Angelica Marquez, Amanduh Heaux (Pronounced hoe), Miss Rose Ritz and Raggedie Jane each did two different songs—totaling to eight songs from the talented folk.

Angelica began with an opulent, feathered look. She bedazzled the crowd with an edge of pink and blue burlesque before re-emerging decked out as Selena Quintanilla, a popular and beloved musical figure in Tejano culture.

Amanduh began with a more masculine presenting piece for the first performance before remerging in a stunning floor length dress that screamed of sensuality—and of story. It was beautiful, and almost a bit haunting. In both the masculine and feminine looks there were edges of green in each outfit—an example of how personality attributes to aesthetics in drag no matter what gender attributes one possesses.

Ms. Rose Ritz managed to capture both ends of a spectrum as well, beginning with a spookier, black and green look like a luscious witch. They transitioned to something pink and playful for the next performance, but still rocked out.

Finally, Brooks, who was mentioned earlier in the article as president of HOUS, gave two high energy performances under their stage name, Raggedie Jane. While they opted for a sleek, no frills look for both performances, their control of motion, body and lip sync kept everyone on the edge of their seats.

Those in the crowd offered tips to each performer to show their appreciation, but the applause, the raucous roar of the crowd at a particularly impressive dance move, could be felt reverberating around the room.

Interspersed between each lip sync was the second type of performance, Category. A ‘category’ is basically a theme—and whoever signed up to participate got one chance to stun the crowd with a look, attitude and walk that embodied each concept.

There were 4 different categories to compete in for the Unity Ball: Body, Sex Siren, Bizzarre and This is Me.

Body was meant to show off what one has. It was all about confidence and owning your physique. Sex Siren was about sensuality and capturing the gaze of every individual in the crowd. Bizarre was perfectly timed for Halloween and featured a range of looks from satyrs to spindly black spiders. This is Me was all about presenting the authentic self, reflecting the culture and identity of an individual.

Each category already had planned music, ranging from Megan Thee Stallion’s ‘Body’ for the Body category, to Diana Ross’ ‘I’m Coming Out’ for the This is Me category. Measured by the applause of the crowd, the winner of each theme took home a trophy in the form of a HOUS hoodie.

Some of the winners are involved with the club as E-Board members—there were a lot of familiar faces working all over the event to make it enjoyable. Tomkinson explained that “the order of the performances was collectively decided by the board,” and came down to “general flow, vibe, and who signed up” so they could give performers a break between each one.

Others involved were friends. The photographer, Derrick, and DJ Mixd Kid Anthony Gaines were both familiar with the people putting the event together—an indication that community is really the thing that makes events like this work.

The theme of community kept cropping up over and over throughout the event. While there was careful and considerate planning from HOUS, there was also a level of relaxation to the entire affair. They were more than willing to accept participants at the event—someone from the crowd walked Bizarre Runway—and after the categories came to a close, another event go-er came up and was the only person to walk the This is Me category.

Amanduh Heaux, who was briefly introduced earlier, talked with me about his experience at the Unity Ball, “The crowd was one of the most welcoming and loving I’ve experienced in a long time” he said. “Drag as an art form just brings out so many emotions in people that they might not even know they have. Every drag artist has something special to say, so for people to come out and hear us, it means everything. That’s why we do drag. Drag is our voice.”

There was a sense of comradery, which could be attributed to the attitudes of both the crowd and the performers. It felt like the safe, emotional space Heaux talked about, a space for LGBTQ+ people to gather together and celebrate themselves. To express themselves in whatever form that may take. For two hours, HOUS cultivated a safe space to express sexuality, gender identity, to be praised and appreciated with fierce looks and attitudes.

This is reflected in HOUS’ Instagram account—which features each member, along with their pronouns and why representation is important to them. There are posts about transgender visibility, aid to fellow students and opportunities to bond through movie nights, makeup classes and, of course, ballroom events.

“Moving forward,” Tomkinson said, “we plan to hold at least one ball, preferably [two] each year.” The next planned event for the club is the 2023 Spring the Far Far Away Ball. If it looks anything like the Unity Ball, it is worth attending. Not only because of its entertainment factor, but because supporting the alternative communities here on Michigan State’s campus is beyond important for the university wide goal of diversity and inclusion.

Kalynna Davies is an English major in her senior year. She has a concentration in creative writing and a minor in film—these are both activities she enjoys outside of the classroom, as well. In the future, she intends to use these skills to cultivate counterstories in an array of media—from novel to film.