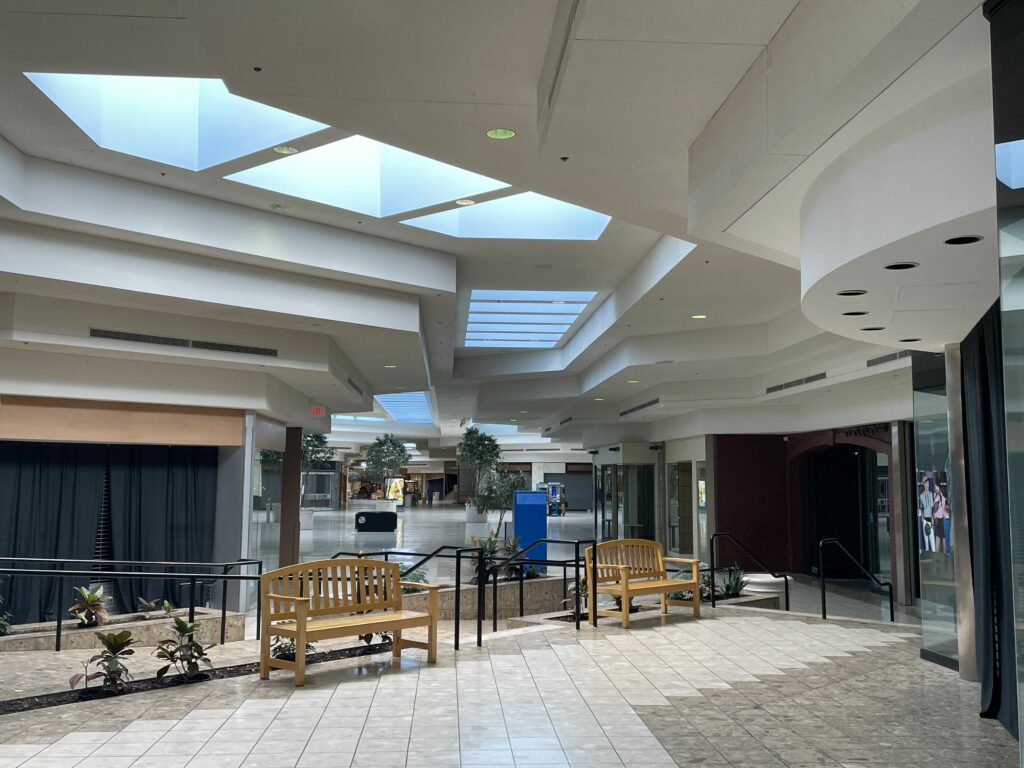 Like many members of Generation Z, I grew up in a dying mall. My middle school years were spent running through its expansive halls with my friends, excitedly exploring the crowded storefronts with colorful signs that advertised brand-new toys, clothes and shoes. By the time I entered high school, many storefronts that I had loved were bare or full of signs describing huge blow-out and going-out-of-business sales. When I finished high school, all but a few stores were gone.

Unfortunately, this is a common occurrence in the United States. According to Slate, a 2017 report from Credit Suisse predicted that 1 in 4 malls would close by 2022–that was before the COVID-19 pandemic. A more recent report described by Insider estimated that another quarter of American malls will close by 2025.

Abigail Smith, a resident of Battle Creek, MI, who grew up with the dying Lakeview Square Mall, remembers when the mall was an important part of the city’s atmosphere and her own life. “My sister and my mom would take me shopping there,” she recounts. “If we weren’t at home, we were at the mall. I thought it was the place you did shopping.”

In the latter half of the 20th century, malls were the place for middle-class consumers to shop. The post-war era brought with it a booming capitalist economy, producing a generation of Americans with cars and disposable income, who fled to the suburbs in the 1960s and -70s and wanted places to shop that were cleaner, safer, and more upscale than deteriorating downtown centers. Malls were the solution.

In response to the influx of white, middle-class consumers to the suburbs, malls were built at a rapid pace, peaking at a few hundred per year in the 1980s, according to The Guardian. By 2005, over 1,500 malls had been built in the United States, but supply for this type of shopping experience would soon outpace demand.

As Josh Sanburn writes for Time magazine, malls “placed disposable income at the center of things.” Unfortunately, the beginning of the 21st century brought an economic recession, resulting in a declining middle class. Suddenly, very few consumers had the disposable income necessary to shop at malls.

Instead, these shopping centers and the department stores that anchored them began to feel expensive and inaccessible to the average consumer.

Smith, who is 20 years old, remembers when the mall became financially and geographically inaccessible to her. “It was around freshman year when we stopped going to the mall,” she says. “Then I just stopped going out.”

Many, like Smith, were forced to stop shopping at malls due to the Great Recession, which resulted in a declining American middle class. According to Vox, the vast majority of income growth since 2007 has gone to high-income households. More than $8 out of every $10 in income growth nationwide went to high-income households. That left very little disposable income for those who made up the audience for malls and their anchor stores in the past. Instead of frequenting department stores like Macy’s and J.C. Penney, previously middle-class consumers turned to discount stores like TJ Maxx and Ross.

Compounding this effect was an increase in online shopping. While mid-priced brands like Adidas and Levi’s began to focus on selling their products through Amazon and other online marketplaces, many department store chains invested heavily in expansion. This move proved fatal in some cases, as chains like Sears, J.C. Penney, and Neiman Marcus were all forced to file for bankruptcy in the past decade. Without the appeal of being the only place to buy name-brand products and a declining customer base, department stores struggled to stay afloat.

Often called the “retail apocalypse,” these changes in shopping habits were detrimental to the health of American malls. “Once a department store goes vacant, that tends to be contagious,” says John M. Clapp, a professor at the University of Connecticut, for Insider. “All those middle-mall stores are depending on the traffic coming from the bigger retail stores.”

Without these retail stores, other stores in the mall cannot support themselves, and they are forced to close. This happened in the Lakeview Square Mall: after the closure of Sears, J.C. Penney, and Macy’s, smaller stores in the middle of the shopping center rapidly went out of business.

For Smith, this was disappointing. “I did care: it meant I couldn’t go to my favorite stores anymore. It was harder to get things that I wanted.” Malls were a symbol of something that just doesn’t exist anymore: the ability for consumers to have anything they desire in one place.

Now, very few consumers can afford this kind of abundance, and when they do want to buy name-brand items, it is often easier to do so online. The closure of malls is representative of the times: capitalism is all about competition, and malls just couldn’t keep up with the decline of the middle class and the rise of online shopping.

Whether or not one believes that the death of malls is bad, one thing is for sure: capitalism created the American mall and subsequently destroyed it.

Kara MacKenzie is currently a senior studying Professional & Public Writing and Women’s & Gender Studies. She is interested in the intersections between rhetoric and social justice, and hopes to one day use her communications skills to benefit a nonprofit organization. In her personal life, she is an intramural volleyball player, plant mom, artist, and avid reader.