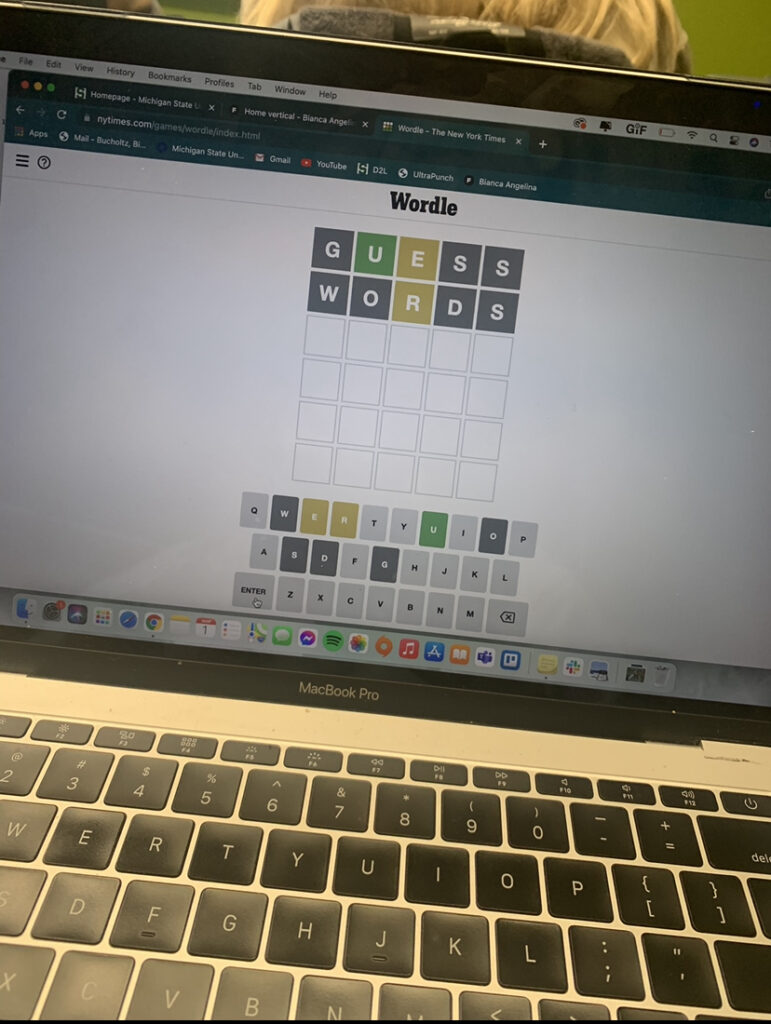 Since 1942, The New York Times has been one of the leading publishers of engaging word puzzle games. From The Crossword, Spelling Bee, Letter Boxed, Tiles and Vertex, the company’s games have been played over 500 million times and in 2021, reached over one million daily subscribers to the NYT Games website.

In February 2021, The New York Times CEO Meredith Kopit Levien announced the company planned to invest in more puzzle games given the success of their previous games.

With a catalog as notable as their own, it came as no surprise to many when the company sought after the latest competition and trending word puzzle game: Wordle.

Wordle is an online word puzzle game in which the player has six attempts to guess a five letter word, with feedback given after each guess in the form of colored tiles indicating which letters are correct. The game was developed in October 2021 by Josh Wardle, who created the game for himself and his partner. They loved word games and were looking for more.

What originally started as the newest addition to the Wardle family game night quickly became an online sensation, with over 300,000 players by December 2021.

To help form this community of players, the game has a built in sharing option; it translates your personal game data into a series of colored square emojis that show how many letters you got each round without giving away the answer. The encrypted results are easier than ever for thousands of people to share (or brag about) their results online and form discussions on their thoughts or frustrations with the word of the day.

Beyond the social aspect produced by its shareability, word puzzle games like Wordle or the NYT daily mini crossword have a natural addicting quality to them that drives their popularity.

In 2020, The Washington Post reported on a study by Philadelphia’s Drexel University where thirty students solved anagrams while researchers used electroencephalography to record their brain activity.

The study showed that after playing the game, the EEG indicated a moment of activity that occurred above the eye in the orbitofrontal cortex, which is responsible for processing rewards. Co-author Yongtaek Oh, a doctoral candidate in psychology at the university’s Creativity Research Lab, said, “Generally, such activity is associated with ‘wanting’ and ‘liking.’”

Essentially, puzzle games create somewhat of an ‘aha’ moment in people’s brains. The challenge or momentum when working on it builds to a relief when one finally gets the answer right—which can produce chemicals in the brain that leaves one wanting more and begs them to come back and play again.

According to Nashivlle-based gaming media outlet Meeple Mountain, puzzles produce dopamine in people’s brains, which is a neurotransmitter that regulates memory, moods and helps concentration. It is generally recognized as producing feelings of happiness.

“Firstly, surprising sub-goals are achieved when doing a puzzle,” communication psychologist Stephan Lermer said in an interview with game and puzzle company Ravensburger. “Secondly, There is also the overall result, which symbolizes ‘I did it!’ that can be displayed and brings admiration and recognition. I like to differentiate between arrogant and healthy pride – people who do puzzles can be proud of themselves in a healthy way.”

However, many psychologists find that puzzles go beyond chemical satisfaction and create a personal sense of inner harmony and balance.

“We humans feel stressed if we have a task that we don’t succeed at and are bored if we are competent at something but have no task,” Lermer said. “By doing puzzles, we achieve the perfect balance. It is where competence meets challenge. It means we have a task that we are capable of doing, but are not sure how long we need to complete it and whether we will be successful at it, on the first try. That is the charm of doing a puzzle.”

The psychology behind puzzle games explains why games like Wordle became popular so quickly. Many people crave the rush they get when they guess the word right and want to come back day after day to get it again.

But it wasn’t just the game itself that many people enjoyed. It was the low-budget, indie-like simplicity of the game that caught people’s attention. They could enjoy the game without ads, banners or pop-ups asking for money.

“I think people kind of appreciate that there’s this thing online that’s just fun,” Wardle said in an interview with reporter Daniel Victor of The New York Times. “It’s not trying to do anything shady with your data or your eyeballs. It’s just a game that’s fun.”

Victor said, “The initial design ignored a lot of the growth-hacking features that are virtually expected of games in the current era. While other games send notifications to your phone hoping you’ll come back throughout the day, Wordle doesn’t want an intense relationship.”

“It’s something that encourages you to spend three minutes a day,” Wardle said. “And that’s it. Like, it doesn’t want any more of your time than that.”

As a simple and accessible game by design, many were shocked in January when Wardle agreed to sell the game to The New York Times for an undisclosed seven-figure sum. Players worried the game would begin to require a paid subscription like the rest of The New York Times Games catalog.

However, Wardle and The New York Times announced that the game would remain free to new and existing players for the foreseeable future. And while this relieved the worries of many dedicated fans, many were quick to point out some other issues that arose when the game moved to The New York Times website in February. Most notably, according to The Verge, the company has altered Wordle’s solutions, adding more difficult/less common words and removing words such as “whore” and “bitch,” deemed inappropriate.

The Verge reported that on Feb. 15, the New York Times’ version of Wordle had created a new list of possible solutions, even though they announced no changes to the game would be made. Many people claim these words are harder or more obscure than the previous version.

According to data journalist Sharon Lurye of US News, this accusation holds some truth with the daily word on Feb. 16 being the most obscure word in the game’s history. Lurye said, “A peek into the code that powers Wordle shows that fans are partially right: Caulk was one of the most obscure Wordle answers ever, and there’s data to prove it.”

However, Lurye reported the list of words used by The New York Times has no added words, only removed words they felt were inappropriate or insensitive.

Regardless of if the game has changed, it is continuing to see success with over a million daily players after the acquisition. And though some fans aren’t completely happy with the decision, both Wardle and The New York Times feel the decision will help the game grow and continue to thrive online.

“If you’ve followed along with the story of Wordle, you’ll know that New York Times Games play a big part in its origins, and so this step feels very natural to me,” Wardle tweeted. “I’ve long admired The Times’s approach to the quality of their games and the respect with which they treat their players. Their values are aligned with mine on these matters and I’m thrilled that they will be stewards of the game moving forward.”

The future of Wordle appears to be ever-growing and the merge with The New York Times is just the beginning of what’s likely to become this generation’s Crossword. With this continued momentum, people are sure to see hundreds of little gray, green and yellow squares on their timeline for a while.

Bianca Bucholtz is a senior studying professional and public writing with a minor in gender and women’s studies. She is currently the co-editing director at VIM Magazine. In her free time, she enjoys spending time with her family and friends, watching movies/TV shows and baking.